There's nothing like a good road trip to get your creative juices flowing.

There were several reasons why I wanted to go to the International Plowing Match and do some row by row while I was in that area, the weather was awesome and I was away.  When I do a road trip, I try to plan a loop and I was going to start the loop closest to home and then circle back.  However when talking to Elaine on the phone on the way, I reversed my plan and decided to go for the furthest away and work my way back.  Either way, I wasn't able to get to the last planned stop, but no worries - thanks again to the phone and this time Joyce, who saved my bacon by getting me the information that I needed.

No need for a GPS for the first stop - I was off to Quilt Essentials in St. Jacob's.  Everyone knows where that is and I had a quick stop - picked up a license plate and a few goodies and I was on my way.  I had never been to the second shop on my list and no idea where the town was. Neither did my GPS!!!  Thanks again to the phone and Google Maps, I was able to figure out where I was going, however I did miss one turn but thankfully hadn't gotten too far before I realized my mistake. I had to stop often to check Google Maps, but once I knew where I was - I was fine.  It's one of those things - the town may call it Perth Line 72, but GPS doesn't like the Perth part of it.  Obviously, I don't use the GPS enough to figure that out.  No worries - I did make it.  And where did I go????

First off - let's say that I was in good old Ontario farm country.  The farms are very close together - something that is unheard of out west.


The store is very nice inside, they sell sewing machines and the owner was a wonderful Mennonite lady who was very chatty.  I had a great visit and then I was off again.

Yes - we are in Mennonite country.  I saw several buggies - the traditional covered one, and a couple of open ones.


The other thing that I saw was solar panels.  I love seeing all these solar panels, but there were two MASSIVE machine shops that had been built specifically with the solar panel thing in mind.  One roof - slanted towards the south and covered in panels.  They were HUGE!!!!!!   I wonder who owns them and they must certainly sell that power back to the grid.

At last, I see the sign that I've been looking for.  QUILT SHOW!!!!!   This International Plowing Match is a a big deal.  This year, it's taking place in Harriston, Ontario and the ENTIRE community has come together to support it. There were some cute signs assembled using round bales, and tons of signs supporting it through the county.  I was very impressed, but then it is what these communities do - they support each other. I saw that there is a contest for the best sign - shoot - I should have stopped to take some pictures because some of them were very creative.

Please note that the quilt show was Friday and Saturday.  However if you missed it, the quilts will be on display again during the actual plowing match which takes place in September - the 20-24th. At that time, there will be a number of different competitions as well as the RCMP Musical Ride.  If you've never seen it - it's fabulous.  I saw it years ago and I was very impressed!!!


And now to the quilt show.  As usual, I took tons of pictures but I'm only going to share one with you.  We had to pick ONE quilt as our favourite. I'm not sure if this is my absolute favourite - well yes I think it is.  While there were tons and tons of beautiful quilts, LOADS of hand quilting, I picked this one for a couple of reasons.  It's original (not made from a pattern), the topics touched my heart and well - I think it's gorgeous. 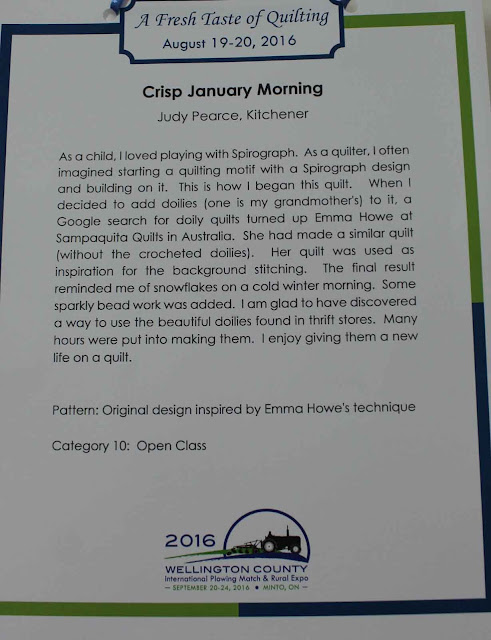 I have tons of doilies and think this is a very neat way to use them, love the background and I loved Spirograph as a kid.  The quilting design is unique and I really like the combination!!!!


One of my reasons for going to the show was to meet Lorna.  Lorna is the brain child behind Sew Fresh Quilts.  If you are NOT familiar with her work, you should be.   She is Canadian, she is very creative and has a super presence on the internet. Her animal patterns are absolutely adorable and I want them ALL!!!!

I "met" Lorna on the internet about one year ago. Since then, we've had many conversation via e-mail and I just love all her patterns.  She is a very prolific quilter and she is FOCUSED.  She told me yesterday that when she got into quilting, she made a decision that she was going to be a finisher!!!!   Oh how I wish!!!!   Anyway - check out her website and her blog - I think you'll like what you see. Don't forget to support our local Canadian quilters!!!!!!

The second reason, I went to the show was to see in person the finished Raffle Quilts that were put together by Renske Helmuth.  If you live in this area and don't know Renske's work - you don't know what you're missing. There is nothing  she touches that doesn't turn out spectacular.  The theme for these raffle quilts was 30 shade of green and the blocks had to be pre-quilted.  This is what her and her group did with them.

I believe the second prize is a sewing machine.


The fabrics to finish the quilts were donated by Northcott.

I believe there was a total of 80 blocks submitted. That's a LOT of blocks.  There was enough left over to make two smaller quilts and I'm not sure where those will end up.

I have to tell you a very funny story about the quilt show.  I was walking around admiring the quilts and there was a woman and an older gentleman sort of cruising the show.  The older gentlemen was looking at the quilt labels and said to the woman "I know that quilter",   "Yep, I know that quilter too".  And at one point I heard him say "I could be a quilt judge!".   From the sound of it, the woman was his daughter.  I'm thinking if his wife is a quilter, then maybe - he did seem quite knowledgeable.  Once I had made the rounds of the show, I was chatting to Renske and some of the other organizers and the woman walks over.  Turns out the older gentleman was Renske's husband!!!!   Oh my goodness - that was pretty funny.  I told her what I had overheard. She roared with laughter, but I'm thinking that he just might make an excellent judge.  He wasn't just a casual by-stander - he was truly interested in the quilts and that was refreshing!!!!

Northcott had also donated some fabric to make some bags for some of the youth involved in the plowing match.  I want to say that it was the contestants for the Queen of the Furrow contest.  Here are the bags - they look gorgeous.


At last, I tore myself away from the show. It was an excellent way to spend the afternoon, but I had two more stops to make.

I set the GPS for Fergus and I was off.  Made it to Undercover Quilts with 15 minutes to spare before they closed for the day!

And the last stop was Guelph (Greenwood Quiltery) where they had run out of license plates.  Oh well. I did snap this photo which I think I get every time I go to the quilt store.

What was my haul of the day????   I managed to get six license plates (was hoping for 8)


It was a great day - had loads of fun and now today is a day of work!!!!   I'm very behind in a lot of things and it's time to get organized.