It's tidy up time!

Am I the only one experiencing this issue with my phone?? Hello? Is anyone else out there? I submitted a claim yesterday, and we'll see how quickly they move. In the meantime, I will NO LONGER be answering my phone. It's just too frustrating to have a conversation with anyone, and you will have to get in touch by text or e-mail.

While I didn't get a chance to watch all the pomp and circumstance of the Queen's Jubilee yesterday, I watched some of the replays. I swear that Prince Louis stole the show. His facial expressions were adorable, and they will come back to haunt him (in a cute way) for the rest of his life. But I think the most precious moment was when he turned his face up to the Queen and asked her a question. So sweet, and what a great moment for the Queen to share with her great-grandson.

It's a shame the Queen won't be able to celebrate in person today, but HEY -- if you think about it, she has been the Queen for longer than I've been alive! I hope she's at home, with her feet in bunny slippers, having a cuppa, and watching the whole thing unfold on TV. Imagine having a job that you can't retire from! WOW!!

As usual, I went for a walk, and I had some errands to do and no time to ride my bike. That is this weekend! I carried two more bags of fabric to Diane's house. On my way, I decided to take a slight detour and vote as it was our provincial election yesterday.

Then I stopped by Diane's house and dropped off the two bags of fabric (I know -- who votes with two large bags of fabric in their hands?) Then I picked up some scraps and a couple more quilt tops.

Here are the two quilt tops I picked up the day before.

I have to mention that Diane lives very close to me. In the winter, I can see her house, which is on the other side of the forest. However, if I want to get to Diane's house, I have to walk around to the next street. Anyway -- there are days when I think how easy it would be to wing the bags of fabric over the fence and call her to let her know they are there! That's not going to happen, but I think it sometimes.

Then I was off to the library to pick up a book that I had reserved -- now that my account was free!

Then I walked back home. That took a little over an hour, and I had a wee chat with one of the librarians and looked through the used book sale rack. Some exciting stuff coming up with the library -- just wait for that!

So I got my errands done, AND I walked about 5 KM or something like that. Bottom line - I walked almost 15 KM yesterday. How did that happen? Oh yes --- this also happened yesterday.

I got to work on that large quilt, but not before I ran into that darn error on the software again. I need to get the new version loaded and find out why this is happening. But all is good - the error came while I was setting up the pattern again. If I didn't tell you what had happened, you would NOT know.

As mentioned, the quilt is HUGE.
And this is the back of the quilt. Surprisingly the back didn't appear wobbly at all.
And then I got this smaller one completed as well.
All the quilts are trimmed and will be delivered today. Some steps got accomplished through the quilting as I walk back and forth a lot when I'm working.
While it may appear I'm complaining about some quilts I've done, I have learned so much from them. I learned how to repair and fix the problem with the computer, and it has definitely made me a better quilter. So a BIG THANK YOU to all of you who have forced me to learn!
Then this happened. I have lots of containers under the long arm, but it's rather messy. So I decided to straighten it all up and sort the stuff properly. Good grief -- what a mess.
It started with just one tub, then it went to two, and before I knew it, I had pulled TWELVE tubs from under the long arm and some smaller open ones.
Eight boxes got pulled from this area and sorted. Four of them went back pretty much as is, and four needed to be further sorted.
Four tubs got pulled from this area. I'm happy to note that there are only FOUR tubs (of eight) left with fabric donated to the community projects. That will still take a very long time to deal with, but at least we are making head roads into getting rid of those tubs of fabric. I'm thrilled and thank Diane from the bottom of my heart for her hard work.

All this stuff needed to be hauled upstairs or the empty containers put nicely in the furnace room. I'm not entirely done there yet, but I will work on it this afternoon.
And now it's all nice and neatly organized, although I'm missing a couple of labels. My goal is to replace the boxes with plastic tubs as they are emptied. My ultimate goal would be to have NOTHING under the long arm, but that isn't going to happen; but there will soon be empty spots! 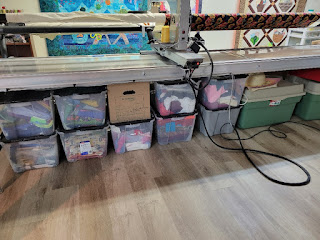 The other side is also super neat and organized.
All the small tubs and open containers except for three got dealt with. This looks so much neater and cleaner, and things are together. It'll be so easy to find something in the future.
This is all that I pulled from those boxes. This stuff needs to find a home, so that will be on the agenda for later today. 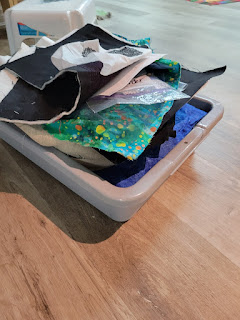 What I would like to do now is create an inventory list of what is in each box. Then it would be super easy to find anything. I"m working on it -- I did that at one point, and I must refind those lists. They are on a clipboard downstairs, and I don't think all the boxes got inventoried.
The cutting table looked like a disaster. But I had got some bags of scraps from Diane, and I was determined to deal with them. So the quilt tops got put away, and so did ALL the scraps. They are now filed in the appropriate container by color.
Well, I am determined to make things happen, and then this happened.
Yes -- that is the office. I was looking for a book that I bought several years ago and well, after all this time of shuffling it around, I can't find it. So I decided to go through the boxes in the office. I'll share what I found tomorrow. I did NOT locate the book; however, I could request the book from the library, so I did that.
I'm not sure how to describe its current state -- a hurricane went through or an obstacle course? It will be too much to deal with in one day, but on my goodness, there is a LOT of stuff that needs to go. I cannot imagine leaving this job to someone else to do, and they would not be thinking pleasant thoughts of me, and this is ONLY one room. So I am determined to get it done. I'm now on a roll, and let's hope that I can keep my motivation and have the time.
The other thing I accomplished yesterday was to connect my library card to all FIVE libraries that I have access to (digitally).

As you know, I'm not always the best with technology, and I've tried in the past, but yesterday I succeeded. Yeah!!!!! That meant I could find two more books that I've been looking for, and they are now on hold.

I'm sure I'll laugh when I find the book I wanted to find yesterday. It's probably in a safe and logical place, but where would that be?

I know I will have to be ruthless when it comes to all this paper. I know that I will want to look at everything before I throw it away. That's me -- don't try to change me. I sincerely hope that I get faster at it as I go, which I'm sure I will. But it's not so bad that I didn't manage to rifle through almost every box in here. There are two tubs that I didn't get to and ONE box. I doubt it's either of those, but you never know. I might just check or wait for the book to come from the library.

To make it easier??? I might just grab one box of crap every day and deal with that. If I get energized, I can go through more than one. But it's a bit depressing, although I know I'll feel better if I get it cleaned up. Oh my -- could this actually be happening?

Don't forget that the Hamilton Quilt show is TODAY and tomorrow. I'm going today, so I'd better get myself organized.