So -- it's exciting to be able to go somewhere, but I don't think I've ever gone somewhere and not been in a flap the day before. And I know people who travel every week -- well, they used to. I would have died long ago!

I had to make sure that all my travel docs were in order. And it seems you have to resubmit your vaccine papers for each trip. So far, there's no one beside me on the plane. Then I still have to change some previous arrangements - hotels, cars, etc. And seriously - trying to contact anyone is a nightmare. I still have one more hotel to reconfirm, a car rental, and one more flight to change. I'll do it along the way. Sigh...............

Then there's the matter of getting everything done at home. I've been madly sending e-mails all day, and I have a couple more to send tonight. Oh yes-- I'm writing this the night before you get to read it because there will NOT be time tomorrow, and if I'm lucky, I'll get a few hours of sleep. Not to worry -- I can sleep on the plane for five hours if I need to.

I'm not packed -- I know -- in less than 12 hours, I'll be on a plane, and I haven't packed. That's normal for me. I have all my non-clothing items on the kitchen table, so I consider that packed. It's just a matter of opening the suitcase and the backpack and shoving it in! And let's hope there's room for a pair of shoes, a couple pairs of pants, and the few other things I need. I travel as LIGHT as I possibly can. No way am I checking luggage if I can help it.

And thank goodness I shipped those boxes earlier because one of my modes of transportation does NOT accommodate much baggage. It's going to be an exciting assortment of planes, trains, and automobiles! Just wait -- I definitely plan to keep you up to date on my travels.

The other day I had to buy a new trimming tool in preparation for part of my new yard. I spotted this box, but it wasn't what I was looking for. Did you know that Husqvarna and Husqvarna Viking were all part of the same family once upon a time? They split company a while back, and the sewing machine company took on the extra name of Viking! 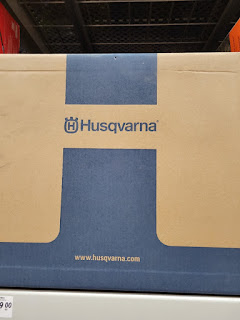 And for those that know of my poor ruler situation -- I have a brand new one, as I have literally worn the paint off the old one. I think you all saw that at some point.
I found more artwork in my decluttering, and this one will get hung up downstairs. I bought it in Vancouver many years ago. I love it, and as often as I've been out there, I've never seen whales like this. Maybe this time? Nope -- not going to be close to where they hang out.
Oh -- and what about the bricks? So this is the front of the house where that blocked downspout is located. Because it was blocked, it froze in the winter and started pushing the facing off the bricks. That is one of the reasons why we wanted to redo the yard. Yep -- a costly repair for a blocked downspout.
Since we won't be able to match the brick exactly, they are pulling brick out from the side of the front step, and this brick above will get cut out, and they will switch them. Could we call that brick grafting?
It won't be perfect, but it'll look a lot better than it does now.
So I decided to try the boiling water with those wine bottles, and guess what? It worked, but only for one of the labels. 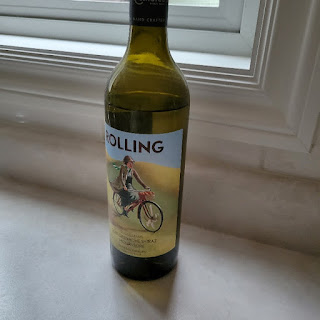 I just peeled that label off in one piece. I was very impressed. The other one wanted to disintegrate as the paper was a different type. No matter -- I've saved one, and now both bottles are in the recycling (well -- beer store recycling bin).
A lot more files got transferred to that little hard disk. I envision spending 5 hours on the plane and thoroughly cleaning up the files. What a dreamer!!!! I'll likely sleep most of the way.
I have used the MOVE function (thanks, Nina), and it works like a charm, except for one thing. The original files were part of a backup, and they don't seem to remove the files if they are in a folder? I don't know, but at this point, I think I've pulled all I need off that third external hard drive. When I'm back, I'll have a quick look and DELETE everything or clean it up -- whatever it needs to get empty and become the new backup.
I have a plan, and that's all that counts. It won't happen overnight, but at least I'm making a stab at removing files that are no longer needed, and I can see from the transfer that there are loads of them. It's like moving -- you move more than you need and then realize you don't have room in the new place, so you start to purge what you should have before you left.
Ronda and Celeste stopped by to use the heat press for T-shirt making on their way to the movie. Ooops -- we had a minor snafu with the process. So they must try again. I was going to get a T-shirt done for my Dad -- I've only had two years to do it, and I just couldn't cope with it, so I'll have to mail it to him. Sigh. I feel bad about that, and so totally my fault. He doesn't know, so what he doesn't know won't kill him!
Murphy and I went out on the bike again, and she loves to pull. She could definitely be a sled dog, while the Husky (that would be Lexi) is not going to work out as a sled dog. She is such a princess that it's crazy. "Mom! Run? You expect me to run? Not on your life!" I can envision us with Lexi on the sled while Murphy and I pull her!
Murphy and I stopped for a picture in the forest. She needs to get a bit better focused and not want to sniff everything, but I don't think it will take her long to get the hang of it. I've been out three times and have had NO accidents, so that's a good thing. I was apprehensive about that, but I've got a decent handle on how it works now. We will NOT be doing any speedy rides unless she gets better focused.
I had SIX blooms in the pond today. So cool, and I will miss them over the next 10 days.
And what nasty little parasites are these? I spotted them on the trees in the forest. They seem to be gobbling the leaf and devouring sections of it. They look pretty slimy, those little things.

Well, that's it for me. I'd better get that darned suitcase packed as I will attempt to put a binding on a small wallhanging before I leave in the morning! And I've been updating presentations all day as pictures come in. Yep -- going to host two presentations while I'm away. Shere lunacy!!!
OH -- I will share what happened in the embroidery club when I get back. I have to say that this group is so creative and so exciting -- we went almost a full hour over the time limit because there was so much to discuss. They are a great group and so willing to try new things!!!! Yeah -- for machine embroidery!!!
I've asked DH to take pictures of the renovations while I'm away. The response? What will I take photos of? Sigh.................
OK -- I'm out of here now.
Have a super day!!!
Ciao!!!!