I survived the day, but not without a couple of laughs. I had been texting one of my colleagues in the morning, and we were both saying that we didn't want to talk to anyone, especially each other! Then my SIL, who doesn't live close but is here because MIL had her second knee done, stopped by, and guess what? I had to talk!

I tried to have an extra nap in the morning, but the cleaning lady came, so that wasn't going to work! It was just one of those days! But I did end up having two short naps, and while I still feel a bit tired today, I'm good!

Let's just say that both girls were pretty excited (in their own way) to go for a walk. And it didn't help that Murphy and I spotted a fox. It proceeded to cross a major road without getting killed. Then it decided it should walk down the same path we were on. It didn't like the fact that Murphy was going ballistic, so it climbed up the chain-link fence, and off it went! I tried to get a picture, but at this point, I was holding the leash of a lunatic dog, a poop bag, and there wasn't a third hand to deal with the phone!

Lexi was her usual calm self for the most part, and while we've spotted rabbits occasionally during our walks, she's pretty quiet. Love you, Lexi! OK -- I love you too, Murphy!

When my company left, it was lunchtime, and after lunch, I decided I should attempt to do something. But what? My brain was tired, and I didn't want to get into anything too complicated.

OH -- before we go there, look at this cartoon that someone posted on my timeline on Facebook. Yep --- some people are PROUD of this fact, but seriously?? This is a serious issue and needs to be dealt with by the collectors, not passed on to their children. The cartoon is by Bob Eckstein.   I know some people hold items for family members as they may not have room at this moment, or the family members don't want to deal with the things. Guess what? If they can't take them now, they will NEVER be able to take them. Hard decisions need to be made, and then deal with them!

Our garage is full right now -- there's a car, tons of landscaping tools, and four bikes! Once everything is done, I hope to get in there and do some decluttering; not that there is much to get rid of, but it would be good to get that done before winter, and perhaps we could even put BOTH cars in the garage. That's not for today!

You should go back to yesterday's blog and read Elle's comment. I don't think there is ANYTHING extra in her house, but check out the comment to see how small things can accumulate. HOPEFULLY, I WILL get to the point she is sooner rather than later. I need to finish this office and then go back to the top of the house, and each pass will be much easier! I can hardly wait!

Oh -- here's a flower I spotted when I was out with Lexi. I know I can at least snap a photo or two with her. Murphy -- not so much! 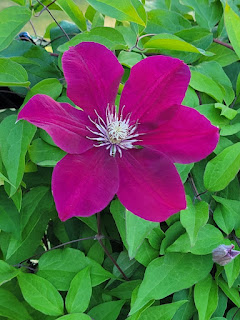 I had to finish trimming one quilt, and once that was out of the way, my cutting table looked like this. A few things to tidy up, but yesterday, even that seemed like a daunting task.
But I spotted this puzzle on the cutting table and thought - that's about the capacity of my brain power. 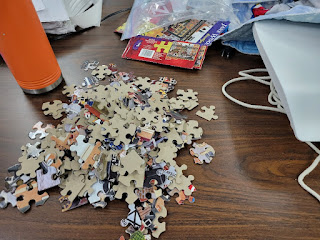 There were only 300 pieces in this puzzle, so it didn't take long to lay out all the pieces.
And before I knew it, the puzzle was done! It's now packed up and ready to pass along to someone else. I would not buy a 300-piece puzzle, but I grabbed several from my neighbor before she moved.
Here's an exciting thing that happened while I put that puzzle together. I received TWO phone calls, and my first thought was, OH -- I have to go upstairs to take the call, but I didn't want to. And guess what? My phone seemed to work just fine. No dropped calls. I think my phone was acting up because it was NOT connecting to the Wi-Fi in the house. I used more data in the first 10 days being home than I did for the 10 days I was away. Now that is totally weird. So I'll keep an eye out for that in the future.
I was just listening to a chat on the radio about air travel, and they offered some recommendations. The best one is to get the APP for the airline you are flying. This is an ABSOLUTE must. You can see everything about your flight - before you get e-mails or any notifications from the airline. The APP is fantastic! At least for Air Canada.
So this happened at our house yesterday.
When I arrived back from my walk, the big cement truck had come to deliver the rest of the front step. I think most of the hardscaping is done now that that is poured. Well, not exactly, as the crew must add the stones to the top step and the patio area. It's not very big, but our front yard isn't huge. But it'll be nice to sit out there, enjoy a cup of tea, and chat with the passersby.
We're getting a new post for the front step as well. While the old one looks solid enough, the base was rotted, so out with the old and in with the new.
Oh -- I did get a bit more ambitious as the day wore on, and I managed to clean my sewing machine and wind bobbins for the next session.
And I even got so ambitious as to put a binding on a small quilt. This is one of the ones for Project Linus, and two more need to be bound. I hope to get at least one of them done today. However, I did NOTHING towards the homework prep for the weekend, so I had better organize myself for that.
And here are the girls. Lexi loves to be near her Dad. But I guess she found the tiles cooler than the wood floor in his office, so she is standing guard outside the door!
And Murphy is just entertaining. She's the class clown and can't help herself. I'm trying to read a book, and she's playing with her ball in her new bed. Such a goof!
Well, not only is it a busy weekend with classes, I forgot about Sunday with another class - but I don't have much to prep for that one, and it's Virtual Retreat this weekend! I totally forgot about that. Here are the links!
Saturday - June 25 --starts at 6 PM
Join Zoom Meeting https://us02web.zoom.us/j/89254233911?pwd=VGQrTnFybW1HMWpleHA4M2Q2NGVwZz09 Meeting ID: 892 5423 3911 Passcode: 982797

In looking at the calendar, I am NOT ready for this month to be over. So much more that I want to accomplish! But it is what it is!!

On that note, I'm out of here to get the day started. Loads to do and no time for slacking today, although I'm on duty to drive the family members to the airport today. A minor task.