Friends are good for the soul

I love that we all have the same interests! Recommending books to each other is so much fun, and I have to say that you have introduced me to some new authors, and I've returned the favor! It's been a  bit of an eye-opener, to say the least. I would be stuck with the same author's over and over again!

And thanks to everyone for your comments -- I need to get some time to acknowledge them because I read them all and love the feedback!

Speaking of antiques - I saw Judy has donated the last box of stuff that belonged to her mother, who passed several years ago. I got a call from my brother last night. I was tired and already in bed, but I decided to take the call since he doesn't call often. And I don't call him often! I had to laugh, as earlier in the day, he sent me the link to that article about inheriting your parents' stuff. The one about inheriting your parents' junk! He said it was written for us, and it was. It's super scary because there are many of us in the same boat.

We are in a strange situation with our parents' stuff. It's not like we need to empty the houses and sell them. The junk can remain there until someone purchases the farm property and will likely level the houses. However, that usually doesn't happen -- the structures just get abandoned as so many before these houses. It's a bit sad to drive around and see those old houses, but that's life.

Personally, I'd love to go through them and empty them. Whether the junk goes into a bin, or we dig a big hole on the property and bury it all, or burn it to the ground (although that would break my heart), life has to move on. However, it's not an option while they are still alive. So the stuff remains.

My brother and SIL putter through the remaining junk and have unearthed stuff that they deem worthy of donating or selling. They complain (somewhat) about doing it, and I can't understand why they don't just let it all go. I'm past that point, but they live there and have access to it. I plan to go out in a couple of weeks and will take a last look (Hopefully my last look) at the stuff, and then I want to mentally walk away from it all. Whether that will be a reality or not, I don't know.

But it leaves a huge elephant in the room, to say the least. And my Mom is fixated on the value of the stuff that remains. She has the opportunity to sell some things in an upcoming garage sale and sends my Dad out to bring in stuff. Everything is now topsy turvy in the house - well, not in the same place, and he can't find anything. So she asked my brother to bring stuff in. She wants him to bring the boxes to her, so she can sort them out and then keep HALF of it in the already cramped apartment and sell what she deems she doesn't want.

My Mom is sneaky and will deny that until she is gone. So we are the MEAN children who block her from her things. And then there is the book incident. Gosh, how I wish I never mentioned that book. I'm sure I mentioned it here, and the story doesn't seem to go away! The book is now in my aunt's hands (I'm shocked that it ended up there), and I'll be seeing her in a couple of weeks. I will get a picture of myself with THE book, and I'll post it and the story. I'm sure I mentioned the book on my blog, but I have NO WAY of quickly finding that link.

It's sad, but it's a reality that belongs to so many people who grew up with nothing. Anyway --- I didn't get to sleep as quickly as I would have liked, and I needed to get that off my chest! This is a further incentive to get my things in order, tidy up, and get rid of what I don't want or need. And other than quilt stuff, I'm tempted to go bare minimum. How many clothes does one person need?

When my parents are gone, I only hope that the rest of the family (two brothers) will agree on things and let us move on. I've heard many horror stories about that, and I just don't want to deal with it with my own family. Fingers crossed.

I'll share the tree story tomorrow. I managed to sneak in a few days of R&R -- Retreat and relaxation! Yes -- I'm at another retreat, but only for four days! There's nothing like good friends and good conversation to soothe the soul!

I didn't bring a ton of stuff with me, and that's OK -- I'd like to get some of this stuff done as it's been to several retreats and time to get it finished.

Here's another instance of why make one when two is better. These were started many years ago, and I believe they are called Magic Tiles by Kathy Bissett. 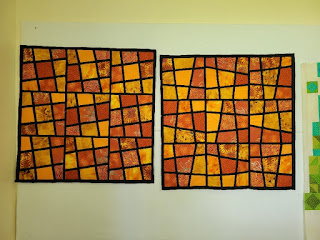 There have been some significant issues with the copyright of this pattern, and technically this was NOT done from Kathy's pattern. But I remember her being adamant that NOTHING created from her pattern could be posted without reference to her pattern and name. But it's essentially a stack and slash quilt. And I recently learned (although not sure how accurate the information is) that you CANNOT copyright a technique in the quilting world. Hmm -- not sure about that. You can copyright the instructions and your version of it, but how can you copyright applique techniques? Or cutting and piecing?

All that remained was to add the skinny border on the outside of one of them. That's done, and now the binding for both is also made, and there is fabric pulled for the backing. So these will go in the "to be quilted" pile when I get home. I decided not to add a large border on them, keeping those orange squares the focal.

Then it was onto my Chunk of the Month, which is part of this month's UFO homework. And for some reason, I had it in my head that it needed to be done for Sunday, and now I have weeks to get it done! I did as much as I could before I realized that I did NOT bring the blue fabric needed to cut the triangles, and I did NOT bring the Easy Angle ruler required to cut the triangles of the orange and blue.
There are thirteen rows in the block, and I managed to get six of them before running out of blue and orange triangles. They are NOT pressed because I don't know which way to rotate the seams as it has to fit into the previous section.
I made progress on this and will put that ruler AND the blue fabric in the bag with the next section. Or, to make it easier, I'll just cut some triangles and put them in the bag with this section and the next one. But I don't care -- I've made progress, and that's all that counts.
I had started to sew those rows together as four patches, and I got two done and then went for a walk. As I've mentioned numerous times, I think about everything and nothing on my walks. It was there that I realized that I couldn't see them as four patches because I didn't know the orientation of the seams in the previous sections, which are at home. Thank goodness for that head-clearing walk! There will be NO unripping when I get home.
Then it was time for project number three. I decided to bring my Long Time Gone quilt. The border(s) needed to be determined and put on, and well -- let's get this done. I made it challenging by only bringing a box of scraps - no overthinking allowed!
I decided to add a scrappy grey border to the outside. And yes -- I could have brought yardage and made it easy, but that would never be me. So I went through my grey scrap box and sorted out all the bits that I thought would work, and I then cut 1 1/2" strips in various lengths.
Then I sewed the random stirps together and had plenty to put the first of three borders on the quilt. I wasn't sure how it would look, but I really like the effect after round one. Today, I will add the final two borders, and then I have other stuff to work on.
I brought a hugely overflowing bag of stuff, and I have an empty bag. I put the finished stuff in the second bag to keep things neat and tidy.
This is the bag with the finished stuff I did yesterday. Yes -- I get obsessed with keeping things tidy once they are tidy!
And this bag is all that's left for me to work on! Thank goodness we are not here for a long time! But there is enough in the bag to keep me entertained for the next couple of days! No worries about that, and if I get bored of sewing, I have a bag of half-square triangles that need to be trimmed.
And here we are -- a small group, and it's so lovely to have the peace and quiet. We all function on the same wavelength, and it's the most relaxing retreat of all. I would like to point out that my tablespace is very neat! OK -- so it's also the emptiest! 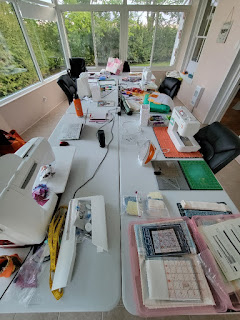 Have we gotten a lot of sewing done? Hardly, when you have extended lunch and dinner breaks. I think we sat at the dinner table for two hours! This retreat is all about -- spending time with friends and enjoying life. It's not all about the sewing. We are at Retreat at the Farm, in case you are wondering. It's only one hour from my house, and that's the perfect distance for me. This is my fifth time here, and I have to say that I love it more and more with every visit.
There are no potato fields this year, but there is a crop of some kind, and the farmer was along with his fertilizer? It certainly wasn't a sprayer, and he was booting it around the field like he was in a big hurry! 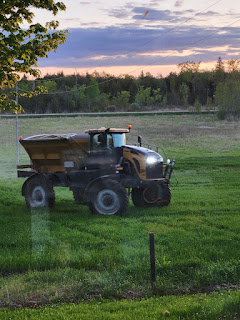 And it's always fun to watch the horses at the farm next door. They were rather frisky yesterday and were running around and enjoying themselves.

I went for a long walk, and it was a glorious day!

Well, I'd best get myself organized for a day of sewing - I WANT to get that border on and work on another project. Which one will it be?

I'm writing blog posts for QUILTsocial this week, so check out the first one. I'm making fidget quilts, which is a great way to test out the techniques and functions of your sewing machine.