What a crazy day!!!  I had so much fun at the Virtual Retreat, and we got to meet Marsha from LA! Hello Marsha! Jenny from Australia was on -- very early in the morning for her. Good morning (or should I say -- good afternoon) to Jenny!

And there was the usual group of crazies. Colleen was in her car driving back home after being a snowbird for the winter. And the rest of us were coming and going depending on what else the day had planned for us.

It's always great fun to chat with people while sewing, although I'm not nearly as productive as I could be, that's OK. Conversing with friends and exercising your brain should be part of your daily routine.

I saw this billboard when I arrived downtown yesterday morning, and I thought it was perfect. It's from CAMH - which stands for Center for Addiction and Mental Health. I think we all could quality for the services at some point in our lives!

We have some fascinating discussions, and collectively, we could solve any world problem. Some of the topics are very stimulating, and I've learned a ton of stuff from the people who come online. But they can get me into trouble with places to visit and things I "need," but I try to be firm!

For instance, I had a free Saturday in May, but thanks to Helen Anne, I now have two events that day! But both of them are very interesting, and I'll be sharing the details with you later so you can attend if you want.

I know -- You got excited when you saw the blog post's title and thought I was going to share my CherryWood Challenge with you. Remember, the theme this year is graffiti. HA HA HA HA   -- it's not that we cannot share at this point. As a matter of fact, if you want to see what some people have submitted, you can check out this link.

I was off bright and early yesterday to help with The Toronto Marathon. As I mentioned yesterday, I wasn't going to do it, but honestly, after yesterday, it was SO much easier physically, well, I almost wasn't even needed.

We had two trucks from the party rental company (tables and chairs and our supplies), which they had loaded yesterday. Then another lady and I got in our warm van, and we followed one of the trucks. We had a list of supplies to be dumped at each location. So what's a location?

A spot with a water hydrant with a spigot attached so they could get water from it and a couple of porta-potties. We had seven drops to make all over the city. Well, along the bottom half of the route! The other team did the top half.

And look at the fantastic bike paths that are new since I last did this job.

But the guys did all the heavy lifting, not to say that I didn't help load or unload a box of cups or two. My job was to make sure that everything needed got dropped -- a checklist -- and chat with the volunteer group! Several groups were decked out with the colors of Ukraine and one location was sponsored by my gym. The new job was so easy. And so much better to NOT be alone.
When we arrived back at the start line, the two trucks from the party rental company got ready to pick up the stuff --- smart thinking on their part so that when we were ready to follow the marathon runners and pick up, we were prepared. Not that we went fast!
While we were waiting, I walked to the start line to get a photo. And this guy was walking around with a HUGE "boombox." The speakers were in this BOSE bag, and I'm assuming the source of the music was in his wheelie bag. Hmmm -- not very practical for travel, but I'm sure he had his reasons.
This is the job I originally signed up for -- a bike marshal! Years ago at the Toronto Bike Show, I got roped into doing this job, and I never got to be a bike marshal!

I have no problem with walkers, but they NEED to walk like they have a plan. And they need to be able to maintain a certain pace.  If they can't meet the pace, they shouldn't be allowed to walk or they should get pulled. There were five people at the tail end and I swear, they looked like they were out for a stroll. Pick up the pace people!!!

I mean, when you have a convoy of about TEN vehicles behind you, you think they could hustle a bit. That included our van, the truck, two police cars, an ambulance, a car from the city and other people picking up fences and pilons. I think they hit the halfway point of the HALF marathon at 3 hours. That is WAY too slow.

Oh wait -- I got off track about the graffiti. I wanted to be home by 1 PM to join the Virtual Retreat, so I told them I was available until noon. We planned for me to park my car approximately where we would be at noon, and it worked like a charm. I had to walk three blocks to get to the car and look at what I found along the way. This is absolutely stunning, and my pictures DON'T do justice to this ART at all.

These pictures are taken under the Gardiner Expressway along Lower River Street.

I think part of this vast space is designated as a park, and it was filled with young people on skateboards and playing basketball.
The pillars were filled with beautiful designs that, GASP, is graffiti. Absolutely stunning; I almost wish I had seen this BEFORE I did my Cherrywood Challenge. 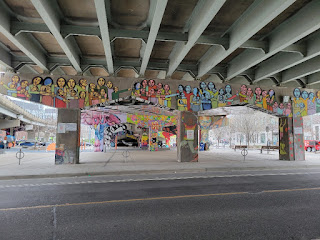 To imagine that this all came from a can of spray paint blows my mind! It's beautiful, and I would imagine that the other side of the pillars are also covered with graffiti. 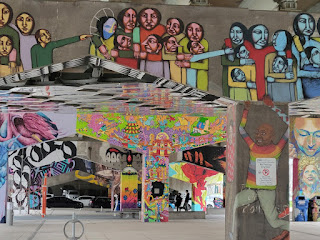 And this following picture was on the side of a building on Queen Street and was covered with various cats and dogs. It went on for quite a distance on this building, and I think there might have been a crazy rabbit or two.

But if ever you are in that area, it's well worth looking around. I'd love to go back and check it out more and see the other side of the pillars. Sunday is a great day to go as there isn't a lot of traffic, especially if you go early in the morning. It would be awesome to tour around.

I think that would be a great idea. We live in an AMAZING city with some fabulous stuff -- even the buildings are super interesting. Why are we NOT playing tourist in our own cities instead of traipsing off to somewhere else? There is SO MUCH to see in this city and while Toronto isn't huge by other city standards, there are MANY smaller ethnic communities throughout, parks, buildings, and just amazing stuff to see. I MUST plan a couple of Sunday mornings to play tourist!

And I spotted this on the way back as well. This is the BACKYARD of these urban dwellings. Yep -- a tiny patio with a beautiful wall of windows (that probably no one ever opens), and there is space for a chair and a BBQ. Yikes -- a bit too confining for my liking!

I think we would die with that tiny and PUBLIC of a backyard, but hey -- if you are a urban dweller, this is prime real estate and it's worth a LOT.

It's time to walk the girls and then get ready for Monday sewing!

There is LOADS to get done this week and well, I better get my act together! Lots to sew, lots to write and lots of fun and relaxation also! Wait for that!!!