How much is that beer worth?

Someone offered a good suggestion about the charging cords: to have them in a separate bag. This would work IF I had duplicates of the darn things, which I do not. I should buy a second power supply for the laptop, but I don't have a second charger for my Fitbit, and I have no plans to buy one. So if I label the darn phone charger instead of quickly grabbing what I think is the right one, I should be OK. It's the first time EVER that I've made that mistake!

So the worst day of any show, set-up day, is over. However, I'm happy to report that while the day was long, it went rather well. No drama - no injuries, and I FOUND one of my quilts in the company sample bags. I hate to admit that I didn't even know it was missing!

The hotel we are staying at is like a hotel for foodies, so we haven't even hit the restaurant here, although we checked the menu. I don't think there will be much I like. And the prices - well, the more I eat in this restaurant, the less fabric I can buy! Just kidding -- I don't have plans to buy fabric at this show.

So Tim's it is, and they are just down the street. We grab and eat on the drive to the show, and that works for me.

Before we left in the morning, I went geocaching and snagged two caches. They were the ONLY two within walking distance of the hotel. There are a few others, but they are across the river and so not convenient to get there.

I got bonus points, so after finding only three caches, I have 145 points. I need to get 500 by the end of November, so I still have time for that.

Here's a picture of the river. It was beautiful yesterday morning, with the mist rising off of it.

I lived near that river when I moved to Quebec many years ago. I lived in St. Jean sur Richelieu!

There's a cycling path beside the river - well lanes on the road, but there is a good sidewalk in this area, so nice to walk. And can you tell me why ALL the drivers STOP at the stop signs??? It's so encouraging to see. Now I bet some drivers blow through them, but these are good solid stops. And I love how the stop signs are designed, so you know who has a stop. It's a brilliant system. OH --- You can't turn right on a red light. Why can't we have that in Ontario? OH -- because we're probably violating the driver's rights (to be idiots!) Ooops -- did I just write that?

Did I ever say how much I love this province and wish I still lived here? It wasn't my fault I was "forced" to move, and I would still be here if it were my choice. But then my life would have taken a different path, so I'm not complaining! But it's always thought-provoking when you think about how one decision can change your life.
There are a couple of statues in front of the hotel, and this one is all about food.
And this one is all about working. The hotel is showing that you can work and eat at this hotel!
Our booth is huge, and we have a vast variety of stuff on display. Here's one of our walls.
And the second one.
And there's the third one.
It looks different with all the machines in place, but you get the idea.
So the afternoon was taken up by unboxing machines. I hate to say this, but I don't think I will ever get excited about unboxing a new sewing machine. I've unboxed so many of them that another machine is another machine. How awful is that? But it's part of this job, and I don't mind, but some of those machines are heavy and get stuck in the foam and are hard to extract. Let's just say that by the end of the day, I was tired and happy that we were done.
We threaded all the machines, meaning bobbins had to be wound. I was on my almost last machine and grabbed the wrong accessory pack, so things wouldn't fit. I had to work that one out verbally before I realized my mistake. DUH!!!! We had someone from one of the dealers helping us, and I realize now that I should have given her some instructions on setting up the machines so we could come around and fix them up. No worries -- it's all done.
We stopped for a quick bite, and then we were off back to the hotel. But WAIT -- not before we got a bottle opener. I stopped at Wal-Mart and ran to the kitchen section.
Yikes --- this made me stop and think how much I wanted that beer. The price of that fancy opener was $16.47. 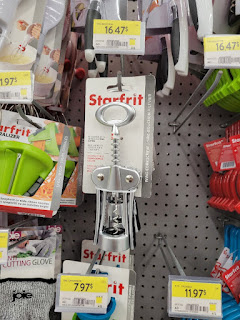 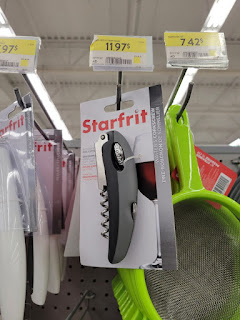 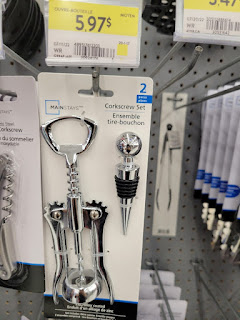 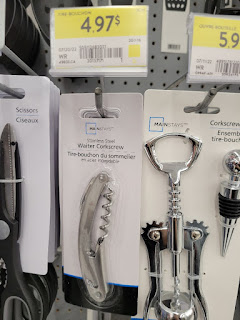 And so Michelle and I sat around until very late for me, and we solved the problems of trade shows and how to very quickly and efficiently set up the booth -- well, at least the samples. LOL -- like that will never happen, but we came up with some good ideas!!!
And, of course, it never fails, I'm away, and they came to install the new railing on our front step. Try to explain to DH where it should fit. Hopefully, it'll be in the right place when I get home. I have to say that I'm not sure I like the railing. One side of the railing is very straight, and the other seems curly. Oh well --- I'll see it when I get home. It's just a railing, after all. I need the functionality, not substance. But we paid a small fortune for that railing.
On that note, I'm out of here! I will take a little walk before heading off to the show. We seem to have a lot of help from the local dealers, so that is GOOD NEWS. At least we will have time to trade each other off for a bit, and I might feel like walking the show. There are MANY vendors here. I didn't think there were a lot of shops in Quebec (or Kbec as the GPS says), and some did come from Ontario.
Have a super day!!!
Ciao!!!