How many of you checked out the challenges the other day? For one of them, the idea popped into my head when I read the title and saw the colors. I've done some research, and it's possible, but it will require a wee bit of finagling to make it happen the way I want. The best time to start is NOW.

OK -- so hopefully, some of you watched that 10-minute video on the Amazon tour. It's quite fascinating, but that does NOT make me want to buy from them. Not in the least. And I think they know that. I tried to book the in-person tour, and every tour was FULL. They know I'm coming and don't want me near their fulfillment center! I get it -- the feeling is mutual! I just want to see it! I'll keep checking the dates.

I am so mixed up about what day of the week it is! I'm actually participating in an online quilt show for two days. OK -- that's a lie. I'm NOT participating; I'm watching. It's by The Grace Company (who does the software for my long arm), and while most of the events are not related to the software, it's fascinating to hear the stories, and they are very much a FAMILY-oriented company. And they are trying to build a QUILT FAMILY. The event is extremely well done with live videos, a great website with vendors, and, if you want a Grace frame, I'd attend the event. They have some AMAZING deals on long arms, frames, machines, and software! At least they sound amazing!

When Lexi and I were out walking earlier this week, we met Wednesday! At first glance, they look the same, but he definitely has different coloring than she does. Anyway -- the two of them had a grand time dancing around each other, and they would have loved to play. However, there was no way that either of us would take the leash off our dog. Those huskies are runners!

I've seen him on numerous occasions with Wednesday, even on his rollerblades. Now that is brave, or he is very good on his rollerblades. Me? I'm sticking with shoes.
Speaking of shoes, I'm not happy. Guess what has happened? My feet are still peeling like mad and way beyond where the blisters were. It almost looks like I got a terrible sunburn, but perhaps a lot of skin was damaged because of those blisters? Anyway -- the "good" news is that I have developed NEW blisters.
These are NOT in any location that previously had a blister. And while they do not look bad in that photo, they are painful. Am I becoming a wimp? With all my shoe swapping in the last three years, I have NEVER had a blister until this summer, and then things just went downhill from there. There has to be an underlying cause. You can't tell me I got unlucky with the last three pairs of shoes I've worn. Am I just getting old, and my skin is now delicate? Oh great --- that won't fly at my house. Anyway -- I plan to get an appointment with a foot specialist to see if they can shed any light on the situation.
In the meantime, I'm babying this blister to prevent it from getting larger, and we'll see what happens.
So when Murphy's ball accidentally goes into the pond, I use a net to get it out. Then I turn the net over, and she catches the ball from the net. I see that she is anticipating that I take the ball and the net and give it to her! What a dog!!! The ball usually ends up in the pond more often because of my lousy throwing arm, than Murphy dropping it in!
And there is Lazy Lexi. She loves to lean against things.
So here's the raccoon story. The other morning, the girls were beside themselves. Barking and barking like mad! I went out to see what was happening and peeked between the slats in the fence to find this on the other side. A raccoon. It was about 10 AM, which is not normal for raccoons.
He wasn't scared and didn't move even when I shooed him away. Next thing I knew, he is walking along the back fence, and by this time, I managed to grab Murphy and drag her into the house. She is the MOST vocal, and Lexi was happy to keep an eye on the raccoon as he ambled along.
I swear this guy was sick! He is right on the other side of the fence and had no desire to go anywhere. 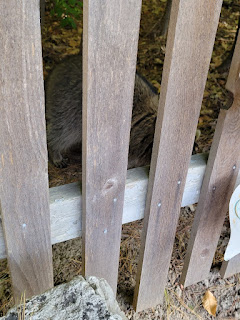 As a matter of fact, he was happy to poke his nose through the fence and even tried to dig under the fence. His face didn't look too good - the eyes were messed up, or so it seemed. I tried to call Animal Services because I didn't want him swatting Lexi and giving her rabies or whatever.
I was on hold forever, and then the raccoon ambled away. So I hung up! Poor raccoon -- OK -- I know they are destructive, but I feel sorry for any sick animal, even though I know all about the circle of life! We haven't seen him since, and hopefully, he won't return.
I walk the dogs in the morning, and when I go for my afternoon walk, I go alone. They are too slow or curious to take along for a good walk. But I felt sorry for Murphy, so I decided to take her on my afternoon walk. I thought Lexi was outside, but when I turned around, they were both sitting there -- begging for a walk. Now how could you say no to that? DH isn't here, so they are lonely when no one is in the house!
So after dropping a book at the library, we went to the dog park. No one else was there, but they had a good run through the park.

It doesn't take Murphy long to get overheated and she needed a rest.
And now for the quilting stuff --- you'll get the thief story tomorrow. Talking about fulfillment centers -- this is my living room right now. Yep -- there's a lot of stuff that needs to go, but I'm waiting on pick-up times, etc., to get rid of most of that. OH -- Lexi is allowed to stay! But she just lays in her kennel and ignores the mess.
While watching The Grace Company's events, I needed to get my act together and get some work done. I want to try and clear the work table area -- it's a mess. So I got myself in gear and got the binding on the sweatshirt jacket, and it is DONE.
And here it is!!! I'm so happy that it's done, and I have to say that I really like it, and it still fits, which is always a good thing. I don't remember exactly when I started it, but let's say it's been a few years!!! I'll probably wear it a lot -- a bit dressier than my grey sweatshirts, but cozy and warm inside, which is what I need in the winter.
The pattern was called "I Can't Believe It's A Sweatshirt" by Back Porch Press. I changed mine up a bit and removed the ribbing on the neck (not cutting it off, but removing the stitches) to preserve the size of the neck opening. And I bound the entire perimeter of the jacket with binding. This is not how it was in the pattern, but I like the effect -- it removes all evidence of it being a sweatshirt. I also bound the cuffs with my little trick that I showed you a while back.
And now that quilted jackets are back in style -- I'll fit right in! I think I'll take it to the quilt show later this month, and there's a new store opening up near me! YES --- a NEW STORE is coming. It's called Sew Productive, and it's in Acton. I will be at the store opening on October 26th as they are also a Husqvarna Viking dealer, and I'll be doing some lectures/demos on quilting and embroidery the following day. I don't know that the owner is ready to take registration for the lectures, but when she is -- I'll be sure and let you know. It'll be the perfect time to see my samples IN PERSON as that doesn't happen very often - at least not locally!!!
And then I was on the long arm to get another customer quilt done. I swear this is the most common thing in the world. I'm on the LAST row, almost at the end, and the bobbin runs out. It never fails!!!
I was watching the stitch-out process. 90%, 91%, 92%, and then at 97% -- the bobbin was done! I had a good chuckle over that.
Here's the quilt that, for some reason, I keep calling it Boho Heart, but it's Wanderer's Wife!!
It has a nice flower/butterfly pattern and looks amazing.

Now you all know that I can be silly sometimes. As I was trying to sort out my long arm digital patterns and get them into the right folders, I realized that I have purchased MANY designs that I never even bothered to upload to the computer. Sigh................ So I sorted some of that out yesterday, and I have more to sort out today. It was like Christmas! I noticed that I even purchased a couple of patterns twice, so I'm hoping to get credit for those, and I can go shopping again! That just goes to show that one must be ORGANIZED with EVERYTHING!!
On that note, I've run out of time! The next quilt is on the long arm; I've got some embroidery that MUST get done today, I still have homework to prep for Sunday, BUT I hope I got all the paperwork out of the way early this morning!
Have a super day!!!
Ciao!!!