The end is near!

OH  --- I see I have some research to do for watering my trees. Thanks to Elle for that. And yes -- those roots did concern me next to that new driveway, so I'll check that out when I get home.

Yes -- I'm away again! It's mostly for work, but I do not have to work. Does that make sense? Well, you'll get the entire picture at some point. But let's just say that I'm on a farm (feeling right at home) outside Ottawa.

I chose to fly here so I wouldn't be exhausted driving all the way. And I'm happy to report that there were ZERO issues getting through the airport. I check in the night before on the computer or the app, as both work well. Carry on only, please, and make sure your bag is the proper size for carry-on. Get the boarding pass on your app, so no need to stop at the kiosk inside the airport.

Proceed directly to the gates. I have a NEXUS card which allows me to use the fast lane for security. Well worth the $50 for the card, provided not everyone gets one, in which case, it will be an issue! No need to remove shoes or belts in that line. We've already undergone a rigorous screening -- I don't know why that means we don't have to take off our shoes. But anyway, that line was quick. And as you stand in the line, get yourself ready. Take off your sweater and hairband, take the laptop out of your bag, etc. Be ready -- the line will go even faster.

I'd say the biggest issue at the airport these days is getting food. There is a place right at the bottom of the stairs, and there was no one there. It doesn't offer much, and it wasn't busy. I decided to venture down to the Tims' line, which was stupid, and I refused to waste my time in the line. I checked the other place I usually buy from, and it was also stupid busy, so I went back to the first place. $16 for a ham and cheese sandwich and a bottle of water. OUCH!

Yep -- getting food is the biggest issue as far as I'm concerned. In the future, BRING something to eat and buy water on the other side of security or bring a refillable bottle. Those prices are highway robbery!

The plane was delayed by 40 minutes, but that really wasn't a big deal. We were on the plane, but they had to wait for two passengers. Imagine that!

I had to laugh while waiting at the gate to board. Is there anyone who does not have a cell phone these days? Or should I say a smartphone? You look at a sea of people, and no one is talking to anyone. They are glued to their phones. It's kind of sad that we are losing touch with how to communicate verbally or that we can't entertain ourselves in another way. What will we do if those communications fail, as happened recently? Can people cope without their phones?

While the airport was busy, it wasn't crazy busy even for early Friday morning, but when I arrived in Ottawa, Oh my --- what a quiet airport! No hustle and bustle -- it was nice!

We had to drive past the wind storm (tornado) 's destruction that happened in May. OH MY --- it was unbelievable. The downed trees went for miles and miles. And a lot of it has been cleaned up by now, but the number of destroyed trees in the wooded areas is unbelievable.

We arrived at the farm and got to work. I'm taking loads of pictures, so I'll have lots to choose from, and today it's all about quilting. I have some projects with me that need quilting, and that's what I'm going to do!!

Thankfully my host is all about walking so Michelle and I took two walks yesterday! That was good since I haven't been getting all my steps in for the last few days.

So this is happening. This is the mileage left on my Virtual Challenge for the Pacific Crest Trail. I started on August 25 last year, and there is only 17.5 KM left!!! I technically have 41 days to complete it, but I think I'll make it before.

WOW   --- that's pretty cool, and while I knew I would make the numbers in the timeframe I set, it's still cool to see it on the screen. NONE of that is biking -- it's all walking, and this is the third year I'm walking at least 4,000 KM in a year. Am I hooked? Maybe just a bit.
Now, if I was home, I might be enticed to finish that off in one day, but I'll finish tomorrow!!
Where am I on the map? I'm very close to the US/Canada border. It's hard to tell in the photo, but the border is at the top of the picture. 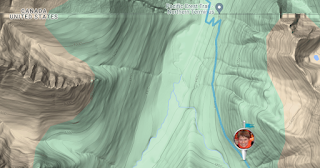 So I checked for pictures, and this is the marker at the border. WOW   -- that's so cool, and someplace I'll likely never see in person. 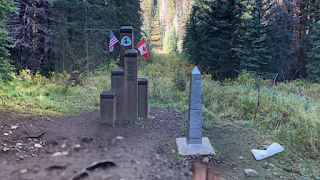 I did send myself some pictures, but I have no idea where they are. For some reason, e-mail doesn't come in as quickly as it used to, and I think one of the issues is with syncing. I now have three devices that use the same account and they all need to sync to each other and sometimes, it takes a while. Well, there wasn't anything super spectacular there, so you can wait until tomorrow when the inbox syncs to the other devices.

I guess it's time to get up and get the day rolling.