The driveway is ALMOST done

So it wasn't quite the productive day that I wanted it to be, but I did OK.

I swear this Patterned Concrete company is the most efficient company I've ever seen. They have teams that do specific jobs and don't waste a second.

The first crew was here before I finished the blog yesterday. This was the cutting crew. Their job was to remove the plastic sheeting from the driveway. I love how they randomly parked the truck practically in the middle of the street.

The plastic was gone, and the cut lines were marked before I could really see what was going on.
Then it got really dusty as they used the concrete saw to make the cut lines. I do believe that is for expansion of the concrete in the winter? Or is that the summer? I don't know.
That team was wrapping up when the next team arrived. This was the washing crew.
OH MY GOSH -- it was like magic -- as they washed the top layer of concrete away, this is the NEW driveway. That chemical they put on the day before somehow stops the very thin top layer of concrete from setting. Wash away the excess and VOILA -- exposed aggregate driveway.
It looks amazing, and I'm so happy we went with it. Let's just say it wasn't cheap and if your car leaks oil, you are NOT allowed to park on my driveway! 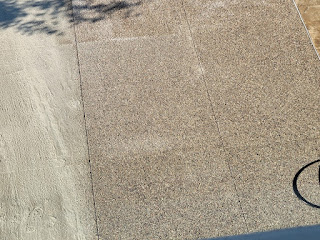 It took them a long time to power wash the drive, but they cleaned up the street down to the drain and were gone by 10:30. The excess concrete was not washed down the drain! Surprisingly there wasn't a lot, but lots of dust so it was more mud!
The driveway is NOT done. We now have to wait ten days, then they come back and powerwash it one more time. Then it gets sealed. Then we wait one more day, and then, at last, we can park in the driveway again. I think that's the schedule. What a LONG process, but well worth the wait. And it's smaller, so less snow to shovel in the winter! I can hardly wait for the first snowstorm. OK -- just kidding on that one.
Murphy was getting pretty bored of the coming and going and just wanted to sleep. But seriously, she had loads of room to sleep in that bed but proceeded to sleep with her butt hanging over the edge!
I got Studio U pretty much cleaned up while I spied on the work! There's still stuff to tidy up, and I want to move some stuff downstairs or upstairs as needed. I really do need to sew up there more often, as it's such a beautiful space. Now I have room again.
During the mess of the morning, the doorbell rang, and I thought it might be one of the crew. Nope - it was the mail person delivering a box. Seriously? I didn't order anything.
Wait a minute, I ordered something at 1:15 PM the previous day and it was here by 10 AM. WOW -- that was fast service, and NO -- this was NOT from that online store! I like to buy directly from a company. I haven't unpacked it yet, but you'll get to see it next week. I'm pretty excited to see how it works.
OK -- I decided that it's time to stop procrastinating. The blinds came down when the new windows went in. That was in December, and the blinds are still hanging around. I found these ones in Studio U. Some of the cords need to be replaced, so I decided to whip down to Blinds to Go and see if they could be repaired. I learned that NO blinds in Canada can be sold with cords. That came into effect in May of this year.
Now, these particular blinds are bottom-up, and top-down, which I love, especially for that large window. I can have privacy and light at the same time. Guess what? You can NO longer have those blinds because they can't figure out how to make them without the cords! Good grief. So could I get mine repaired? You bet! They looked my order up on the computer (bought in 2011), and it should take a week. I'm splurging and having someone come and install them as well. I'm NOT good at that.
I have some other ones to hang and some pictures, and I'll be calling a handyman to do that. Yes -- I could do it myself, but I attempted this morning and hate the result, so I'll let someone better skilled do it, and I'll stick to my quilting.
While I was out, I popped into Chapters. OH boy -- the magazine section is half what it used to be. Literally, two of the four big racks are gone!! And there are NOT many quilting magazines there. I quickly browsed a few and left without buying anything. I'm getting so good at it.
But not before I took this picture of an orange tent with orange lounge chairs? I think that's what they are. Nope -- I didn't buy that either.
Then I got home and got an e-mail that a package was received at my US mailbox. Yeah -- the last time I ordered something, that e-mail never came to me. Now that I know how the system works, within minutes, I had paid for the shipping to Canada, and the package is now on its way! Yeah!!!
I love when things come together but sometimes, there is a steep learning curve. One day -- I'll have it all figured out!
So my big job of the evening, besides packing for a mini-trip and having to do laundry, was to water the new garden. I dug out the sprinkler that I found in the shed and had fun (and got wet) as I remembered how to use the darn thing. But everything is saturated. Tomorrow, they are laying mulch so that will help retain the water. However, we have to do some serious watering every day for a couple of weeks to make sure that things take hold.

I love how Facebook brings up your memories, and these two pictures are memories of M and my trip to London, eight years ago!!! What was with my hair???

But this is one of my favorite pictures. It was a perfect day, the angle was perfect, and M looked awesome! Way to go, M!!!!! That's Kensington Palace in the background, in case you don't recognize it!

On that note, It's time to get moving. I'll share my mini-trip information later. In the meantime, I need to get my suitcase packed. Wait -- the washing machine hasn't stopped yet and I still have to dry stuff.