There never seems to be a dull moment at our house. Whether it's the dogs or the learning curve, there's always something to throw a monkey wrench in the day.

It's all HAPPY news today, but it wasn't so much yesterday. The good news is that the quilt is ALMOST done. I called it quits at 8:30 last night, but I didn't get a chance to start until later in the day, so I made good progress. I learned a few things along the way, and with the aid of the Quiltpath Facebook User's Group--- I was golden. Some stuff I figured out on my own and other issues needed confirmation or asking advice. You have to LOVE Facebook for that.

Even if I stopped using Facebook for general stuff, the user groups are what I LOVE Facebook for.

So the plan is to finish the quilting this morning, get the binding and sleeve on and get to the UPS store by 5 PM. Well, I hope to be there a whole lot earlier than 5 PM, but you never know what can happen in a day.

And while I was busy quilting last night, I got an EXCEPTION notice from UPS about the other package. It got held up at the border, and I bet I know why. Instead of sending it to the company's office, I sent it to a residence because of COVID. It was marked SAMPLE, and I bet the border flagged it for that! GRRRRRR.

The girls were pretty excited about some rabbits in the backyard and were out under the deck trying to get them. Then we went for our walks and breakfast.

After the call, I realized she was STUCK under the deck. Good grief!!!

I poked my phone under the edge of the deck, and YEP -- she is stuck. She was right beside the house and couldn't go forward, couldn't back up. How did she get in that spot in the first place? Oh yes -- hot on the trail of a rabbit.

OK -- what to do? What to do?? And you know, I've had visions of this happening. I have a cordless drill, so let's check what screwdriver tip I need. Oh crap-- it's the only one I don't have, and when I took down the blinds for the windows to be changed, I had to do it with a hand screwdriver. I've been meaning to buy that screwdriver tip but never did.
And were the batteries even charged up?? I don't use this tool very often. So off to the hardware store to see if I can rent an electric drill. Nope-- they don't rent tools any longer. OK -- plan B -- buy the necessary screwdriver tip. I purchased a multi-sied pack, so I've got all the sizes in the Robertson tips! That was the FIRST time in over two years that I took the car to do an errand close to the house. And thankfully, the key fob worked!
Back home and pray that the batteries are charged. Yes -- they are, so I started popping out the screws of the deck. Thank goodness the weather was mild, and there wasn't much snow or ice on the deck.
It took some time to remove the LONG screws, but I couldn't get some of them out. DH wanted to help, but I said NO -- he's not good around tools, and he would have fussed too much. So I called the city's Animal Services. No -- they don't have tools, but they would send someone to help me. HEY -- I was calm, but she must have heard a little underlying plea for help! I had tried calling a couple of other people first, but no one answered their phone.
By this time, Murphy had stopped barking and whimpering. OH NO -- is she still OK?? I stuck my head under the deck and called her name, and I got a slight movement from her, so she was still OK. But I was getting a bit worried. It's not like her to not be vocal, and she had been stuck for hours.
Two people from Animal Services showed up - and they were Murphy's saviors. One of them could get the screws up that I could not. OH yes, when the first battery died, the second one (that hasn't been used in years) was fully charged -- thank you, Black and Decker!!!!
Within a short time after they arrived, the first board was off the deck. And look who popped her head up! "HELP MOM!!!! I'm trapped, and I'm cold and scared!"
I kept her calm while the other two worked on releasing one more board, so we had a space large enough for her to get out.
Yep -- she barked with joy when she was released from her prison. I popped her in the house, and the people from Animal Services helped me remove two more screws that popped through the holes in the board, which was why I couldn't get the screws out. And we set the boards back in place. I thanked them profusely and felt terrible that I didn't offer them anything but verbal gratitude.
I'll put the screws back in another time.
Into the house to see what the situation was. OH god -- she is a mess.
The poor thing lay in the cold mud for a couple of hours, and she had gobs of mud stuck to her. She was already a mess, but now she's even worse. With my deadline, there was no time to give her a bath. 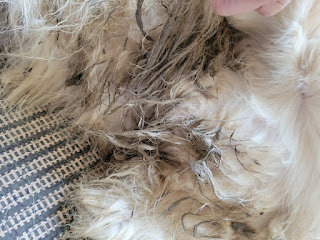 She was pretty subdued the remainder of the day. I think she gave herself a good scare and was exhausted. So, we need to block off under the gazebo and the deck so they can no longer get underneath either of them. The deck will be much harder to do since one end under the shed is completely open, but they don't in from there. Sigh........................
And there were the tools to fix this situation. Look at Lexi -- I think she was scared and didn't know what was going on.
I noticed that DH did not once suggest that we buy a new one through the entire ordeal! I think he was slightly miffed at me that I didn't act sooner when I heard her under the deck. It's not like this is the first time she's been under there. She goes there all the time, but this is the first time she got stuck!
But he loves them as much, if not more than I do, so he was pretty worried as well.
That took almost two hours to resolve! Then I got onto the long arm.
But I still took my walk. Actually, I walked after Murphy was sprung from her prison, as I needed to destress and prep myself for the long arm session. I walked to Diane's and got three more quilt tops that she had made. Oh boy -- I need to get quilting these. I may even try a couple of custom quilts -- small ones!
Remember the other day when I talked about the list of 22 small things for 2022? Well, I finished one of them already. This doll quilt was quilted, and the binding was on but needed to be handstitched. Yep -- it's been sitting around for a long time before I learned how to attach binding by machine. Anyway, while I was on my Zoom calls the last couple of days, I did the hand-stitching, and one silly little item is finished.

I have a number of these and no idea what to do with them now. I may end up giving the doll quilts to the animal shelter. Maybe they could be donated to a women's shelter??? Suggestions?
I see my package is still held at customs, and I didn't expect to see any change overnight. Like seriously -- government customs work at night? I doubt that! Anyway, let's see what happens today.
Praying to the quilting gods yesterday helped with the long arm, so I'm repeating a few prayers this morning so that the remainder of the quilt goes like clockwork and that there are NO exciting episodes of any kind today. I want calm.
But I feel much better than I did yesterday. I don't usually get stressed, but these two quilts have pushed my limit, and now I'm behind in other things. But in the morning or between quilting, I've managed to get most of the homework prepped for tomorrow. I have two classes (3 quilts) and one demo that I'm presenting twice. Some pictures were taken and need to be put into the presentation.
And let's not forget the last-minute people who want to get on the distribution lists, and I'll squeeze that in today.
On that note, I'm out of here!
Have a super day!!!!
Ciao!!!!