I have a Spotify playlist, and we often listen to that at the retreats. It's over 10 hours long and has a variety of songs on it, including a bunch of John Denver. OK -- so I was "in love" with him when I was much younger, and I still like his music, and well -- it just seemed appropriate to call the title of today's post after one of his songs.

I do not understand the algorithms used by Spotify to shuffle through those 10 hours of songs, but it seemed that John was often serenading us. Let's just say that I don't think the playlist does a complete shuffle before it repeats songs. Not a big deal -- I keep it in the background as white noise -- I don't think it really registers with me.

I did get a bit more sewing done in the morning and was going to leave in the early afternoon, but then I had to turn my car around in the snow-covered parking area, which was a challenge. I have ZERO clearance on that car and had to do a bit of shoveling. We had an early lunch, and we were out of there by noon. We made good time to get home -- I have to say that I love the place because of its location -- it's only 1 hour and 15 minutes away. And the house is charming as well. I think it's my favorite retreat house!

So if you want to go, check it out - Retreat at the Farm, but she is booking up FAST, so if you're thinking about it -- book now!

Let's say that two excited girls were waiting when I got home. WAIT -- that's a total lie. ONE girl was excited, the other was "Oh -- you're home! Why did you leave us? Let me outside - Dad not's here, and I need to be in the backyard!" Murphy, on the other hand, wanted to get in the car. That's all she wanted, and it took a lot of coaxing to get her back in the house.

I quickly put everything away, or at least in the room where it needed to go. Food back in the fridge, clothes upstairs, and all that. Then I tackled the stuff that got returned to Studio B. Wow -- I was having so much fun that I spent the rest of the afternoon cleaning up.

I found strips of binding in pink flannel for the pink scrap (flannel) quilt that I made at the retreat. You'll see that later this week. Then I recounted the other scrappy blocks that I made and made up three kits. The two pink ones consisted of 42 squares (scrappy!) and a note in each about the configuration of the quilt. I found a piece of fabric in my stash that could be used for the binding, and those kits got put in the storage room, waiting for someone to say -- "Hey, I need something to sew!"  I did the same thing with the purple blocks I made and found purple strips that I had cut for the binding. So three kits are waiting to go.

So that's the good news in all this. The bad news is this. Here are the remainder of the flannel scraps, and they are all sorted by color: blue/red/green/brown/yellow and black/white. 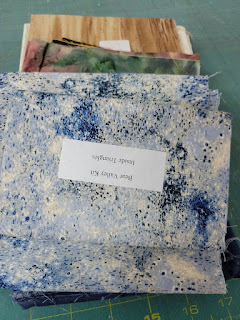 WOW -- One of the reasons I love going to retreats is that I get fired up and motivated. And I'm motivated to get stuff done, and the week is reasonably free, so that's all good news. I still have e-mails to catch up on, one last registration to take care of, and prep for classes this weekend, but all is good.
OH YES -- I keep forgetting to mention that it's Virtual Retreat this coming weekend. So that's Saturday, January 29 from 6 PM - whenever and Sunday, January 30 starting at 11:30 AM until whenever.
I'll be posting the links later this week, so watch for those.
On that note, it's time to get out and walk those girls!!
Have a super day!!!
Ciao!!!

Email ThisBlogThis!Share to TwitterShare to FacebookShare to Pinterest
Labels: decluttering, scraps, Studio B