Out of the frying pan and into the fire

What did I just do? It's like I opened Pandora's Closet and then followed Alice down the rabbit hole.

So I decided to do a bit more sorting of the stuff from the closet. I knew this container of scraps was sitting there, and I was ignoring it, but this morning it called to me. So I dug it out to investigate further.

What's that all about?

The green container is FILLED with green scraps. Don't you love my color coordination?

This is the messy basket. There's a shoebox with neatly folded green scraps, and I think those are the ones I'm done with.

Then there's the penguin box. I mustn't let Kathi see that, or she will covet the box. Or maybe they are puffins, in which case, she won't care.

But in the penguin box is this.

So how many of you remember this project from 2015 or perhaps you started in 2016, 0r 2017, or -- well, it seems that Kathryn has run the FREE program each year since there is still loads of interest in the project. And if you sign up - DO NOT BLAME ME for it.

She thought it would be fun to set up a scrap quilt for her friends to sew, and well, it took on a life of its own. I was surprised to see it still for free on the internet.

She designed it on EQ7, and well, it's been a pretty popular quilt for many years. It's called the 365-day challenge, and you can check it out on her website. The course material is set up very well, and you can check off the assignments as you go. Yep -- there are checklists -- I might just be able to manage this.

Oh, by the way -- those little blocks are THREE inches finished. Some are larger, but a lot of them are 3" finished. I think I managed to get up to February 17 the first time around. I'll be checking it out later today and crossing off the blocks I've already done!! I don't know if I can keep up, but if I can advance this project some more, that would be great.

Here's a link back to when I started the project  - in January of 2016.   Two of my friends (Lynn and Helen Anne) managed to complete their quilts.

See what I mean by a rabbit hole? Oh, Alice -- you shouldn't have!!! DO NOT follow me, but I had to share that with you.

I have to be honest with you -- not only was there the stuff from the closet that needed to be sorted, but there was a laundry basket as well, and now that there is a bit of room near the design wall, I added the laundry basket to the mix.

So NO MORE pulling stuff from anywhere until this is completely dealt with. I moved more fabric and wool into the stash room today. I bet it ended up in the closet because I couldn't really get into the stash room. Yes -- at one point, it was like going on an obstacle course to get anything. That is no longer the case. It's going to happen -- I know it is -- Studio B is going to be so spiffy, I'll be afraid to work there? Oh -- I doubt it'll ever get to that point!

I moved a couple of boxes OFF the current project table and into the closet. That current table has to be dealt with as well. Then I'll stop, but not until the stuff on the floor and the current table is sorted.

There is actually some free space on the table now. Yeah!!! I will sort through the rest, and what can be dealt with quickly will get done. If it's not urgent, then into the closet it goes.

There's still room in the closet. Once things are packed neatly into containers, they go in. I'm a master of squeezing things in, so I'm hoping that all that stuff on the floor and on the table will fit. Of course, that is after I have sorted through it all. I'll keep my fingers crossed, but if not, there is still some room in the storage room where the community projects are stored. Oh yes -- I WILL get this cleared up.

I finally got a chance to make some new bags for the pet mats and emptied the greatly overflowing scrap box.

I had some errands yesterday and zipped out to Party City for one of them. Oh my -- I haven't been in there in ages, and look what I found. A whole section on ORANGE decorations. And look -- an orange tutu!

Even Murphy had to put her paws up on the snowbanks as we walked so she could see across the street.
I walked in the afternoon, and then when I went in the car to do my errands, I parked far away from the first store and walked along the sidewalk to do the errands. Yep -- I need steps - well, not really, as I ended up walking over 16 KM yesterday! But it was so nice, I didn't mind. Today might be a different story as it's considerably colder today.
Last night, we were sitting at the kitchen table, and the girls were sort of sitting together. OK -- Bear and Lexi were close together; Murphy was not. So we gathered them together and attempted to get a photo of the three of them. Something we have never been able to achieve before.
And just like children, they don't like having their pictures taken. What's up with Lexi? You pull the camera out, and she puts her ears back!!!
After we coaxed Lexi into making normal ears, Bear sticks out his tongue. Seriously???
But at last, after many attempts, we got one where they all look relatively normal. Although, they all look pretty serious! 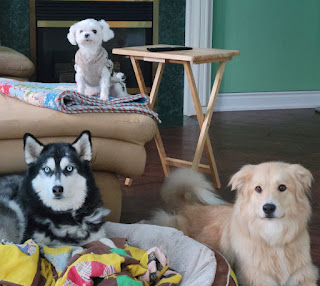 I still have loads to do today, and if I could only stop sorting and tidying, I could actually get some sewing done. But here's the BIG eye-opening about all this. How many hours in total have I spent managing my stuff? Countless and all that time could have been better spent!! Sigh...........
But the good news in that is I'm not going to let that happen again, and I will never need to buy ANYTHING again unless it's paper doilies. More on that later this week.
On that note, it's time to get the day started. I have some writing to do, and I hope to hit the sewing machine at some point.
Don't forget to check out the QUILTsocial blog post today -- Y-seams!!
And the Virtual Retreat is this weekend.
Saturday, January 29 starting at 6 PM
Join Zoom Meeting https://us02web.zoom.us/j/89254233911?pwd=VGQrTnFybW1HMWpleHA4M2Q2NGVwZz09 Meeting ID: 892 5423 3911 Passcode: 982797
Sunday, January 30, starting at 11:30 AM
Join Zoom Meeting https://us02web.zoom.us/j/81693717518?pwd=STNoVVQzbDd4ZnROQndNNlpvcC90QT09 Meeting ID: 816 9371 7518 Passcode: 579285
Have a super day!!
Ciao!!!!