This guild took a big chance that things were going in the right direction. We love you, HAMILTON QUILTER'S GUILD. Here's a link to their show -- it's on June 3 and 4. The location is pretty close to me, and well -- I'm ready to go!! There are vendors, and it's going to be a real quilt show!

Wow -- I could stop right there. That's enough excitement to blow me out of the water. I don't know of any other shows, but if you know of a quilt show coming up (preferably in my area, but it doesn't have to be since you are not all from my area), let me know, and I'll be happy to announce it!

Speaking of in-person events and the Hamilton Quilt Guild, I'll be their guest speaker on April 13. The topic will be Challenges, and that is QUILT Challenges, not life challenges, although sometimes I think they are the same! WOW --- so exciting --- we get to see people in person again!

So here's another event that I would LOVE to be witnessing in person, but well, not this year. Since many people couldn't be there in person, PFAFF decided to host a FACEBOOK live event TONIGHT as they launch the NEW creative icon 2. Here's the link so you can watch, or it'll be recorded so you can watch later.   The launch is TONIGHT at approximately 9 PM EST.

What I love about the lock-down (can you believe it's been TWO years) is that so many good things happened. Would we have access to this new product launch via Facebook if we didn't have the lockdown? Probably not. While it's been a challenge, many good things came from it. Let's celebrate the successes, minimize the negative and move on!

There is a BIG, BRIGHT light at the end of the tunnel, and I've got my sunglasses in hand!!!

I made excellent progress on the writing, and one more homework assignment is almost ready to go out the door. Yep -- still behind big time, but I'm getting there. This coming week is all about catching up because the week after that, I'll be away.

OK-- you will all think I'm crazy, and well-- I am. Let's just face it. A challenge rears its head, or I get an idea, and I have to follow it. I can't help myself as I am so motivated by that kind of thing. DO NOT throw a challenge to me -- I already have enough on my plate and enough personal challenges; I do not need one more. I'm still contemplating walking the 100,000 steps in a day.

After my writing assignment was done, but before I hit send, I needed to get out and clear my head. And I had a few extra steps to make up for the morning.

I had to cut the dog walking a bit short in the morning, but as I was out with Lexi and realized I wasn't going to get back in the house in time to listen to the Barn Block zoom call, I just logged in from my phone, and I listen to part of the Zoom call while I walked! Why not!!

Anyway, I got out on my usual walk, no jacket, no hat, no mitts, and I decided to make it a little bit longer. So I extended it by one block (a huge one to get around the mall). Then I thought I could walk one more block and before I knew it, I hit the river!! Now how did that happen? I had planned to ride my bike there, thinking it was a long way. Sigh..................

I decided to walk along the river path until I reached the small village (in the city) and then cut back home. It's a perfect loop for a walk, and I think it's about 8 KM? I didn't really pay attention. I took many pictures along the way, but I won't bore you with them. Parts of the path were muddy, but it was very doable in running shoes.

I have to say that a couple of bikes passed me as I was on the bike path on my way to the river. After we finish our cross Canada walk this month, which is all walking, I might start getting my bike out and do some bike runs in the afternoon. I need LOTS of cardio miles this year, and they can be by bike or walking. Gosh -- this is all so exciting.

This is the spot I visited a couple of months ago when I was out geocaching, and the river is much higher and faster right now.
What's totally amazing, and I should know better by now, is that a couple of years ago, I thought I was doing great if I walked to the local Tim's. That's about 1 KM away. WOW -- I thought -- I actually walked all the way to Tim's. I just laugh now because I walk past that Tim's with Lexi, and we go further, and I usually pass it on my daily walk, where it's just a blur now.
What used to be an insurmountable distance is just a blip, and now I have a new distance -- to the river and back. Good grief -- I'm not going to have any time for quilting!
Then we went to the restaurant last night. DH had an errand to do on the way, so I walked there. He just rolled his eyes when I suggested it. Gosh -- it's not far at all. We could both walk there and back -- it would do him good as he sits in his office all day!
Yep -- I've become obsessed. NO -- that's a lie, as I'm obsessed with almost everything -- it's just what is on my radar for the day.
I had to laugh when we were at the restaurant. It's getting much busier than we've seen in a long, long time. We've been regular goers every week that they were open. The bar side was about half full last night, and the restaurant side was very full, something we hadn't seen in a long, long time.
But there was a table of four men in the bar. Honestly, I wanted to go over there and slap them all. They were laughing like a bunch of high school girls and talking so loud that we could barely hear ourselves. We couldn't even hear the conversation at the table next to us. Seriously???  This better not be the norm for behavior in public. Or next time, I will get up and slap them silly.
Then home to sit and read for a bit. Oh gosh --- those girls are so entertaining and needy that I didn't get much reading done.
After looking out the window, they had to fight.
Then Murphy got her toy bear, ripped his red ribbon off, and took a nap. Then she was off to find her ball, and I swear she INTENTIONALLY rolled it under the furniture, so I had to get it for her.

Eventually, I did get to read!
Does anyone still get the Connecting Threads catalog? Gosh, it has changed, and it's almost like a little magazine. It's all product, of course, but not nearly the same as it used to be. It was filled with books and notions and fabric. Still product, but not nearly as much. 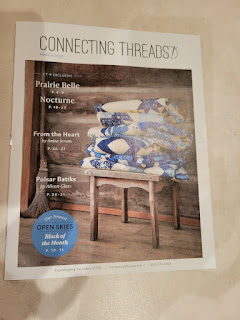 Well, I must get myself together. Another busy day and I can't wait to see the launch of the new PFAFF creative icon 2 TONIGHT.
Have a super day and WALK ON in this glorious weather!!!
Ciao!!!!