I've been up for HOURS! And thank goodness because it's taken me this long to get the two presentations done for this morning! Oops -- just had to delete all the July Zoom recordings to ensure there would be room for August recordings. OK --- all the pictures are taken, edited, and loaded. I'm ready! I'm kind of excited as well! I haven't had a Zoom class in a while -- I miss EVERYONE!

Despite that massive list of things to do before I leave, I think I crossed one thing off yesterday! At this rate, I won't be going. Many e-mails need to be sent, and it shouldn't take long to whip through them once I get to the computer. Yesterday? I was at the sewing machine. I've become obsessed with this Green Tea quilt, and I want to be up to date (more or less). I can't say more than that until after the class, but let's just say I'm doing the happy dance.

Thanks to Stephanie, who cleared up the SIM card issue I was anticipating. She says that once I put that new SIM card in, my phone should act like its old self! Yeah!!! But I might take a password or two with me -- just in case!

I laughed while chatting with DH about SIM cards and roaming charges and asked him what he does when he travels on vacation. He pays the roaming charges as he can't be bothered to get a SIM card. Granted, he isn't away as long as I will be, but still. If he was gone for months, he's still pay roaming charges unless someone bought him the card and installed it for him.

Let's just say we don't go on vacation together for a reason! He would DIE doing the kind of trips I LOVE, and I'd be bored with his golf trips!

But I also read and have experienced firsthand that neither spouse is happy when husband and wife go on some of these adventure trips together. I've been on cycling trips with couples, and in ALL instances, one or the other had to sacrifice something, and I got the distinct impression that neither of them was happy about it. On cycling trips, it's usually the lady who is the weaker cyclist, so does the husband stay behind with her? Or does he ride up front with the other macho guys?

There's also the social aspect of it. Should you stick with your spouse since you came together? Or should you each make new friends as the chance of another couple on the same trip is very unlikely? So you don't get to be as free as you would if you were alone and don't get to socialize as much as you would like.

I cajoled a friend to come on one of my cycle trips, and I felt "responsible" for her the entire way. I would NEVER do that again. That's why I'm happy to go alone -- if I feel bad, I feel bad, and no one has to hear me whine and complain. If I'm happy, then the whole world will hear it! But I also don't have to contend with someone else's bad mood. Selfish? Perhaps -- but I want to enjoy my trip, not worry that someone isn't enjoying their version of the same trip.

Now, if it were a cruise, which probably won't ever happen, although I recently saw someone on a cruise where you could cycle around the perimeter of one of the decks! Seriously??? If you want to check it out -- here's a video!! Maybe when I'm older! I'm too young for a cruise! (that's my personal opinion on that one!) A friend of mine is on that cruise ship and did the SkyRide and said it scared the crap out of her, but she did it!!

So -- I can't put it off any longer - -I needed to get out with that backpack to see how it fits and works. I felt like a fool walking around my 4 KM urban trek.

While it looks huge, it's not. And it wasn't full by any means. I intentionally didn't fill it to the top, nor did I weigh it before leaving, and I had to pick up a book at the library. So it seems to be OK. There is a mesh in the back, so while I was sweaty when I arrived back at the house, I could feel the breeze on my back, and it sat up on my hips, so there was no pulling on the shoulders. Actually, the weight feels very well distributed over my body. I swear it's almost like a skeleton on the outside of your body, where the hip strap, the shoulder straps, the back thing (whatever that's called), and the front strap all contribute to distributing the weight.

Towards the end of my "hike," I noticed my arms rubbing slightly against the sides. So I may need to address that or walk like a gorilla. It could be that the back was packed wide, not out from my back. But good thing I'm checking this out now!

When I got back to the house, I weighed the back. During the walk, I was trying to guess how much it weighed. And remember that the backpack weighs just slightly over 2 lbs, which counts towards the 10 lb maximum. It's a 28 L pack, in case you're wondering.

Well, it weighed 6 lbs! I swear books are heavy! And my phone was also in the pack, but I plan to carry it and my papers in a fanny pack, so they will be handy. Once you get that pack on, it fits like a glove (I had it fitted when I bought it), and you don't want to take it off.

I'm debating on how to carry water. I cannot reach the side pockets when the pack is on. I do NOT want to take it off every time I need to drink. I've thought of a water bladder with a tube for drinking, but I think it will be a hassle to refill. The two people I've been following carry water bottles, which might be my route. Refilling them along the way will be easy; the water bladder will not when it's packed into my pack. Now to find the clips to attach the water bottles to the front of the straps.

Ah -- what fun to figure all this stuff out, but better to do it BEFORE I leave than after.

As mentioned, I plan to leave here with that pack weighing 10 lbs, so once I ditched the library book and my phone, I probably had five pounds. That gives me 5 more pounds of stuff to put in, so that sounds about right. I've got to start getting that organized, and I'll carry a bit more weight today until I get to the 10 lbs. Then I'll see if I have room for that crossword book or not! Nothing goes in the backpack unless it has at least ONE purpose, possibly two, and there will be NOTHING that fits in the "I might need this category!"

Here's a tip for anyone who likes to use plush or cuddle or Minky for your quilt backing. This tip could save you a LOT of money.

We always tell our customers that the back should be 3 to 4 inches all around, but what do you do with these soft fabrics as they are generally 62 inches wide, and your quilt is close to that? Do you use two lengths? That's a challenge as that seam is bulky; it becomes very unwieldy and heavy to load on the long arm.

As you can see in these pictures, the left and right sides are just shy of the width of the backing. 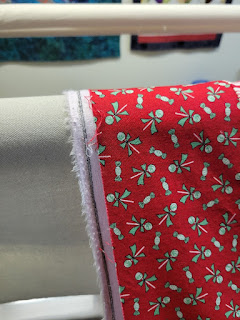 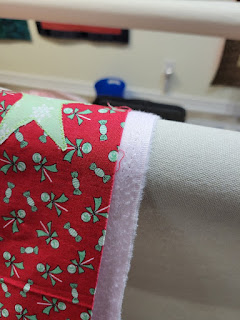 So this could work, but it's a hassle with the head of the long arm bumping the clamps, and it would be a mess along the edges. What to do?
I keep strips of fabric just for this purpose, and I use the serger to attach the strips to the selvage of the plush.
Then I can load the quilt with the selvage perpendicular to the frame to prevent stretching, and I have room to work, and the head of the long arm won't bump into the clams. But when serging, ensure that the threads are NOT caught under the handle of the serger. I learned that lesson the hard way! Thankfully, it was only one of the needle threads that broke!
It's easy to keep the quilt lined up with the edge of the backing.
And there's just enough room along the edge for the quilt. The fabric strips will get trimmed off and ready for the next use. 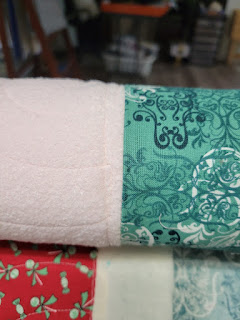 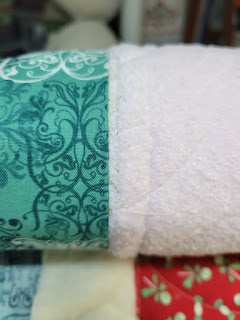 So I saved that customer a whole length of plush she could use for the next quilt. When I saw the two pieces sewn together, I knew I wouldn't be happy, and when I realized that the quilt would fit on one width, I took the backing apart and did this! So --- double check with your long arm quilter if you are using plush on the back and your quilt is almost the same width. You might get away with ONE width and save a lot of money.
OK -- so Murphy has to find a new spot to sleep. See how dirty my design wall is because of her. And when I went down the other day, part of the Butterfly Quilt had fallen off, and she just lay there! Oh, Murphy!!!!

Well, it's time to get out with the girls.