I was checking out some adventure quotes last night and came across these two, which I think are great ones, to sum up, my philosophy about life. 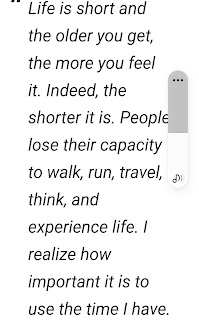 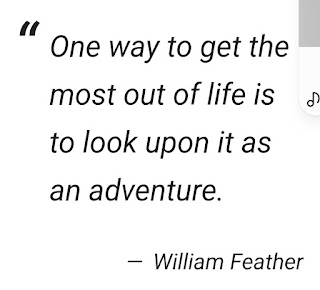 Both spoke to me as I searched the internet while watering my trees in the front yard.

I've not traveled a lot in my life, but I've traveled across Canada several times in several different modes of transport - train, plane, car, and from coast to coast by bicycle.

Years ago, I practically begged the organizers of Katimavik to accept me into the program's first year. Something I would not have done or even known about, except then Prime Minister Pierre Elliot Trudeau visited our high school and announced it. That seemed to open the door to a ticket out of what could be a life as a secretary.

While I was homesick a good number of times during that 10-month program, it opened my eyes to new possibilities, and it was a result of that program that I moved to Montreal many, many years ago. An anglo speaking very young person who knew no one in Quebec but the boy I had met in the youth program. No wonder my Mom doesn't speak fondly of me!

For years, I worked and, while never experiencing many adventures, was always willing to try new things. There was no time for big adventures. OK --- so for a fair amount of time, I was shy and well -- let's not go there.

Then over 10 years ago, I relearned to ride a bike (does one ever forget?) and, within one year, was off from Vancouver to Inuvik in the Northwest Territories. Staying in a fancy hotel with access to everything you have at home doesn't change you. But riding a bike into the wilderness for three weeks does!

The further north we went, the more remote it became until we rode the last week on the Dempster Highway -- 800 KM of gravel and only ONE spot halfway with electricity. No internet, no electricity, and no rest stop except at Eagle Plains.

That trip changed me. After that trip, I decided I wanted to do more with my life than watch TV, so I gave it up cold turkey. I was a reality show junky! OK -- I will admit that I"m watching Amazing Race Canada right now (OMG -- so exciting!), but that's the extent. I'm MINDFULLY watching TV and carefully selecting what I watch. The scenery and visiting all those cities vicariously is fascinating.

I've been on various bike trips again, with the cross-Canada trip being the most epic. That was 10 weeks of mostly camping and learning that riding in the rain can be fun. I haven't done too much epic adventuring since, but I've been on numerous cycle trips.

I'm feeling the itch again, and it's booked.

I'm going to walk the Camino de Santiago de Compostela from St. Jean Pied de Port (France) to Santiago (Spain). That's a distance of 800 km (more or less), and I have 30 days to do it.

You must have your credentials stamped daily along the way to get your certificate at the end. I decided to buy mine before I left, and it arrived the other day.

And I also purchased a badge that I can attach to my backpack.
I've purchased some of my gear, but I have one more trip to make after I dig around the house for things I can use here. You know me, there is NO doing this the easy way and having my bags transported each day. Nope -- everything I take will be carried on my back. So for 30 days, I'll live with about 12 pounds of stuff. Talk about being a minimalist.
Imagine how clean that office will become when I get back! I leave in less than two weeks, and I have a lot of stuff to do between now and then. Although I'm puttering here and there every day, removing a couple of things, work is being done - just nothing major.
Most people have a reason to walk the Camino -- religious, spiritual, healing, or whatever. I haven't decided yet - other than it's there and I want to walk it. I've been training for this walk for the last three years and have been averaging 12 KM a day. It will be a challenging walk, but it's well within my ability.
Anyway -- I will be blogging! I've been researching how things will work, and I think I'm good - I just need that extra set of clothes!
I'll share my preparations over the next two weeks, so stay tuned. In the meantime, there are quilts to make, writing to do, and much more. I'll bring you up-to-date tomorrow.
But this picture is what life is all about. Open the horizons, do new things (I stopped and turned the car around to grab this photo yesterday), don't get stuck in a rut, and well -- enjoy life because it's the only one you have, and it's too damn short to not do what you want to do.

That's it for today -- I slept in because I think I was too excited to get to sleep at my usual time! Why was I excited? I posted my trip intentions on Facebook and IG and enjoyed reading the comments!