Oh my -- they will have to pry all ten of us out of this house tomorrow! In the past, we've consistently filled the retreat house with the maximum number of people, and we were pretty happy, although we were always cramped, especially for sewing. Then during the pandemic, only a few of us could go, and we liked the peace and having plenty of room to work.

So this house can sleep 12, and we weren't sure if we wanted to fill it, so we came with ten. But it could easily hold twelve people, and for sewing with twelve? No problem with space, as this place is HUGE.

We're usually waiting to iron, encroaching on each other's sewing space, or clambering over bags of projects near the tables. Not so here -- Someone has even left their project on one of the cutting tables, and no one has had to move it! And where is this gem?? It's called Spring House Retreat, near New Hamburg, and so worth coming. I think we could all live here!

I also have quite a few new people (new to my quilting retreats) along this time, and you always wonder if the mix of people will work. Most of them "know" each from meeting on a Zoom call or a virtual retreat. And I'd say it's working fine, although we like to tease about voting Someone off the island. That has only happened ONCE, where I had invited a person along, and I was asked by several of the other group people that this person NOT be invited back. That was years ago at our very first retreat house. This one is the fifth that I've been booking.

I don't call that lucky; I call that -- gracious quilters! We are friendly people, for the most part!

That doesn't mean that some of them don't have a mischievous side to them. Oh yes, we've had our fun. This retreat is no different. I forgot to bring some enders and leaders with me, so I asked everyone if they had something I could use to give to me. And this is one of the things I got!

So that's a half-square triangle, right? Look at the size of it! The seam allowance would take up most of the piece!

I won't mention any names -- they know who they are! But now we have to be on our toes!

It's undoubtedly entertaining here -- there's a hummingbird feeder right outside one of the windows in the sitting area, and it's fun to watch them. Incredibly, they can flit and hover in place and are so darn tiny!

And then there are the two resident cats. We were told they are feral, but I suspect they are just cautious. We've been able to let them approach us and were able to touch the tail or a quick touch along the back. Last night, I sat outside, and the cat (they are called Mr. and Mrs. Pickles, but not sure if that is gender appropriate!) came up to me, and I was able to give it more attention, but it won't quite come close enough for you to snuggle with it.

Later, Katheleen sat out on the veranda, and it was getting close to trusting us. I think the poor thing is craving attention; it's purring like mad and comes when we are out but isn't quite sure who we are. They came with the farm, so who knows how long they have missed attention. The other cat thinks this attention thing is good but stays further away, so we can't even touch it. Maybe today?

I managed to get all the sewing done on my Tula Pink Butterfly that I could. Good grief - that took so much time, so I'm glad I brought it with me. At last, I can start working on the other project I brought with me (I only brought two).

Maryke and I walked around the property (with permission), and no crops were damaged in our walk. We had quite a nature hike as we spotted thistle...

Strawberry plants, raspberry bushes, apple trees, and lots of corn - look how tall that corn is.

We took the bug spray with us, but things were good until we got next to the woods. Yikes -- we braved it out and did not use the bug spray. And the final thing we saw on the walk was a garter snake! Maryke had her eagle eye out and spotted it - I just saw the rustle of the grass as it moved away, and that's good enough for me!!

Then after lunch, I went out on my bike, and it was geocaching time! I know  --- totally crazy. And yes -- it was another series of adventures, and my shoes got wet again!

The first stop was in a cemetery not far from the house. Easy to spot the geocache, but just out of reach, and there is NOTHING to use to get up there. I tried standing on my bike, but believe it or not, I'm very cautious and didn't want to risk falling off it. And by this time, a couple was checking out a couple of the graves, and one of them was right in front of where I was standing.

After they left, I spied this garbage bin. So I carried it back to the tree. Turned it upside down and clambered up, signed the cache, and was on my way! OH -- I did take the garbage bin back to where it belonged.

There was another cemetery cache that was easy to get to. I LOVE those, and there were no bugs.

Back down to the river, where yet one more bridge is closed. I don't think this one will be open any time soon. The roads are very overgrown, but I got the cache.

I think I've traveled every gravel road near the house, but that's OK as there isn't a lot of traffic on those roads, and I have my touring bike that I road the Dempster Highway (800 KM of gravel) - so I know she can handle the road.

And I love that Quad-Lock that I bought to hold my phone. It's stable, which allows me to glance at the GPS, so I'm never lost (on the road!)

And then things got interesting. There was a cache on the roadside that Someone couldn't find last month. I was determined to find it, and I should have taken a clue from the reeds along the roadside. I gently tested my footing, and yes -- it was dry. Then I took one more step, and my foot sunk into ankle-deep water. I quickly stepped forward, only to have the other foot disappear into more water. Then I stepped onto dry ground.

So if I had been more cautious, I could have jumped over that and been totally fine. But it's an adventure, and one must move on!

On my way home, I thought I'd grab one or two more caches. OH -- this one requires a bit of a hike into a wooded area. A half a kilometer hike! And I needed a MOUNTAIN bike, not a touring bike. There were ruts in the track; before I knew it, I was looking at my bike from the ground.

However, besides a muddy leg, I was good, and my phone hadn't budged from the handlebars!!! Love you, QUAD-lock!!!

Despite the horrendous mosquitos, I found the cache, which hadn't been touched in a while.

And I reached a milestone -- 600-lifetime cache finds! I'm pretty proud of that number because most were solo finds, meaning I was alone when I found them. Group finds are good and, for some people, more fun because they are in a group, but if Someone in the group is skilled at finding the, then what's the fun or the skill?

I'm going out this morning on my bike, but not sure about geocaching. I'll look for the tame ones with zero bugs!

We had birthday cake yesterday as one of the ladies celebrated her birthday with us. I LOVE birthday cake, and this one was yummy!!! 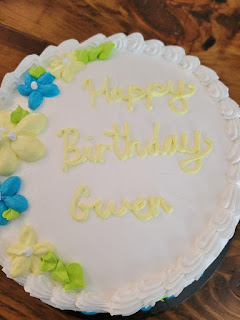 Well, I've already started working on my Green Tea quilt, and I'm far behind in the homework!

Time to get rolling.