My knight in shining armor

I had one of the best nights of sleep that I've had in a long time. No aches or pains, no waking up with thousands of ideas flowing through my head. Just one long continuous sleep! Yeah! Now, if we could only bottle that and make it happen every night, that would be awesome!

Somehow, the stars are NOT aligned at my house, and I will be happy when today is over. Why? Well, have a look.

On Friday night, I was reading on our deck. It started to spit a bit of rain, so I decided to move to the gazebo. I'm moving all my stuff in and had to open up the lawn chair when CRASH! I knocked over the small table that I had placed my things on, and I broke my FAVORITE glass.

No, it couldn't be any crappy glass that we have - it was my favorite one! So I made a new rule - drink out of the crappy glasses, especially when I'm outside. Of course, I could have easily broken that glass in the house. It was time to say goodbye to the glass. We don't have tons of glasses in our house, and I'm not about to buy new ones. We're using up what we have, and I kind of doubt that we'll ever have to buy new ones. I'm OK with that.

If it ended there, I would have been happy, but it did not.

Yesterday was a glorious day, and I had NOT been out on my bike yet this year. There is always something scheduled in my calendar. So with nothing on the calendar until 12:30, I pumped up the tires, changed into my cycling gear, and I was off.

There were tons of cyclists out yesterday, and the car traffic was very respectful. WOW!! I had one embarrassing moment. There is a steep but short hill on my route, and of course, as I'm slogging my way up that hill, I'm passed by a bunch of guys who whiz past me. Could they not have passed me when I was at least rolling merrily along? Nope - on the hill!!

Things were going along just fine when suddenly, I heard a loud clicking sound, and I could see something in my front tire. NO!!!!!!!!!!!!! I stopped, and sure enough, there was a short screw sticking out of my tire. CRAP!!!!  I wasn't sure how far it had driven through my tires (I have high-quality tires on that bike), and I managed about 2 more KM, and then my tire was flat.

Now here's the hilarious thing. In 2010, I rode the entire Dempster Highway from Dawson City to Inuvik. We were warned that the roads would shred a bicycle tire in no time flat, so I had purchased some pretty nice tires. Well, in that entire time on the 800 KM of gravel "highway," I didn't have a single flat tire, and neither did many of my fellow riders.
Just in general, I've not had many flat tires. But that screw punctured through, and well, that was that. Now, I'm a bit of a careless cyclist in that I carry a pump on my bike, but I had not packed a spare tube and the right tools. So I was stranded on the side of the road, and it was too far to walk home.
I do have CAA, and I called them, and they would pick up the bike, but NOT me because of COVID. Well, that's stupid. So I called a friend! OH - DH was on the golf course, and he would have made me wait until they were done the game! Ronda (my shining knight) to the rescue. I thought she would have the bike rack on the van, and it'll be perfect. When she arrived, she had taken the bike rack off the day before! Oh boy -- thankfully, she has a van, and we were set. My bike and I got a ride home.
Ronda, Thank you SO MUCH - I now owe her a big favor!! I'm sure things will all even out. So here's the thing, I checked what the female equivalent of a knight is. Do you know what it is? DAME. OK -- so I just can't see myself saying, My dame in shining armor. It just doesn't work!!!
So that's two things in two days. You know what they say - things come in threes. What will happen today? NOTHING - nothing is going to happen. That's just an old saying!
I messed around in the afternoon, knowing that the tire wasn't going to change itself. You see, in all the years of cycling, I've not had to change many tires, and well - I don't think I ever changed a tire completely on my own. There's always been someone around. And yes, like a wimpy girl, I sometimes let the male cyclists change my tire (if they offered) rather than do it myself. And they know that they can get it done faster than I can. It's a pretty physical thing to change a bike tire. At least with your hands!!!
So I got out the tools, and it took about 40 minutes - well, I could have had it done quicker, but I was learning at the same time. This is what my hands looked like when it was done. 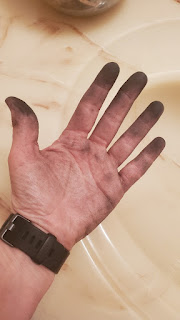 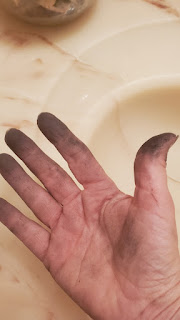 It's a challenge to get that darn tire back on without pinching the tube. I pumped it up, and it seems to be fine. I'll go for another ride today, but I think I'll stick closer to home - just in case.
Now here's the thing. I have 100% confidence in choosing fabrics and making quilts. When it comes to bike repair and changing tires? Not so much. Simply because I haven't done it that often. I'm sure the tire is just fine. And not that I want to change tires every day just to gain confidence; I need to trust myself and say that I did a great job and move on!!!
I'm trying to find a video about confidence and creativity, and when I find it, I'll share it with you. I'm back to listening to podcasts while I work and, of course, getting some great information. And I've been reading a bit more. I can't say that I like this book of short stories. The guy has some very DEMENTED ideas. I mean, very demented. I'm not sure why I'm continuing, but of course, I want to see how this current story ends, and then there are only two more.
Then it'll be time to find another book on MY bookshelf.
I had a bit of extra time yesterday, so instead of quilting, I decided to sort through that new shelf beside my desk. I had literally crammed stuff on it to clear the desktop. Oh my - one of the first things I found was a stack of "to do" lists. From the items on the list, I could tell they were YEARS old. Half the items were checked off, and the other half was not. Nothing that I needed to do any longer, so all of them got trashed.

Holy --- It's shocking to see what kind of stuff I've been hanging onto. I have another pile of stuff to go through today. I don't think I'll take too long to go through it, and hopefully, that'll help me clear my head to get more of it cleaned up.
Here's what my little shelf looks like this morning.
The bottom right cubby is filled with sewing-related stuff that I need to deal with. The cubby above it is reading material - I like to have quick and easy stuff to read while having lunch. The top cubby on the left still holds a bunch of "junk" that needs to be sorted through. The same as the one on the top left, and the bottom right has two boxes filled with whatever!!
It's like my sewing room -- it's so much easier to deal with things when you can see what you have. Now, if I want reading material - it's right there. If I want to sort papers - there's a pile for that. So baby steps, and it's all going to come together.
I did get a quilt loaded on the long arm - I did that BEFORE I changed that bicycle tire. It wouldn't have looked pretty afterward. One more good scrubbing of the hands later today before I touch the very cream-colored quilt!
I got one more writing assignment out the door yesterday, and there are a few more that need to be addressed. I've started on another one, and I hope to get a bit of stuff organized today. I might do that this morning and go for a "city" bike ride later today. That would actually work better for me as I'm much more productive in the morning. And then, if I have issues with my tire, DH can come and rescue me.
And I've been whittling away at that stack of materials for the pillowcases. I still have several pieces to cut, but I've been making steady progress, and that's all that counts.
See, and just like that, I have my day planned. And it's mostly because I worked out the issues while I was writing the blog. I honestly don't know what I would do without writing in the morning. I know some people like to write in a journal every day. What about? Anything and everything. I think it helps to cleanse the mind, get yourself organized so we're not carrying so many thoughts in our heads. It works for me!!!
My problem now is to tackle that stack of paper on the floor. DO NOT add anything to that stack. There are a few papers on the desktop that I have to address (respond to), but I don't think you can get everything done in one day. It's NOT going to happen.
YES -- it's all about getting organized. Getting organized just makes life so much easier to deal with. No searching for things - that's my biggest issue - where do I find things. It's such a waste of time. So I'm determined to get stuff under control. It might take a little while (OK - a LONG while), but it will happen. Then I won't know what to do with myself!!!
As I'm sitting here, I realize that valuable space on the desktop is being consumed by sample packs of batting and color charts. I don't need that on my desktop. It can go downstairs. Hmm. I might actually some major changes to the desk today. We'll see how it goes.
On that note, I'm out of here. Like me, your task today is to deal with more paper!!!
Have a super day!!!!
Ciao!!!