Reducing the stash, one piece at a time

I have to laugh because I got several comments on how to prolong the life of a gluestick. And all of them are probably good. However, I would bet that the one that I had was OLD - ancient even! I might have been able to revive it, but it's gone. But thanks for the tips! I still have about four more glue sticks, so they might go in the freezer or wherever I should put them. Gosh -- I'm amazed at all the tips and tricks for everything! Why don't I know these?

And just like that, I'm done with my presentations for this week! I had two last night and a very relaxed week for the remainder of the week. I do have loads of other stuff to do and some other non-work-related commitments, and let's not forget the writing and the long arm. Oh yes - no fear of running out of things to do around my house.

I just don't get how anyone could be bored!

So back to the backgrounds that I'm creating. Here's what I did with the drunkard's path blocks.

As I mentioned the other day, I have four odd blocks. So I trimmed them to the same size, which I think was 6".

I'm going to sew them together to make a four-patch, and of course, there are many options for this.
This is what I liked the best, and so the blocks got sewn together.
Now what? Get out that ruler and slash that into strips. GASP!! Actually, I don't have any issues with doing this. Those four blocks are oddballs, and what am I going to do with them? So - I chose to experiment with them rather than let them sit. I cut each strip to about 1½". I think the first one was 2".
Then I repositioned all the strips, and some of them got flipped in the process. I then sewed them back together again. There is no right or wrong in this. Just keep rearranging until you get something that looks half decent. Remember, this is a background. We're going to add to it.
I felt that it was a bit skinny for the length, so back to the black scrap box where I pulled out the pieces I had trimmed from the initial blocks. Hmmm - just enough black to make it slightly wider. I need to sew those on later today. See how things work out? I didn't plan this a bit. I could also have cut the block apart and inserted a strip of the background fabric between each strip. I can take two blocks and interlink them. I can do anything I want - it's my experiment.
Here's an example of a piece I made using that same technique. This started out as half-square triangles. Some of the half-square triangles were made of bits of improv fabric, so that's why you see some small pieces. This is a GREAT way to make an improv block if you can't wrap your head around sewing small pieces together.
I didn't embellish this one - it looked interesting enough on its own, so I quilted it with diagonal lines, and it's awaiting the binding. I could literally do the same with the drunkard's path block.
I now have five backgrounds, and I need to come up with 5 more ideas. I have a couple more in mind. Some might just be duplicates of the styles I've already done. I'm OK with that.
Have you started with a background? OH - I know - you're waiting until I have all 10 done so you can choose which one you want to use! And that's OK.
I needed to find a third grey that I could use with my barn block. I knew I had just the right fabric, but where was it? I thought it might still be with the project. So I searched through my UFOs, and that project is missing. Well, it's not missing - I just can't find it! But then I thought I should go through the stash to see if I can find something else that'll work. OH - I found the fabric that I was originally looking for. Hmm - I guess the UFO has a different fabric.
It doesn't matter - I found the fabric that I need to get the value contrast for that block. A project for tomorrow?
Then I had a request from a friend - did I have more of this butterfly fabric, and if so, would I be willing to part with it? It took me all of two minutes to find the fabric, and I have two meters. Well, it's GONE. I bought this many years ago, and while it's a gorgeous fabric, Carol has run out and NEEDS this same fabric. So why would I want to keep it? No reason - I let it go!!!! 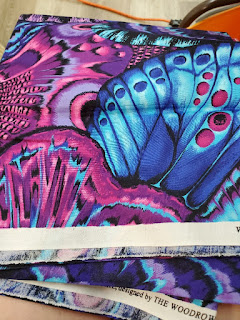 The one thing that I've learned is that when you find a piece of great fabric, I used to buy LOTS. Then I learned that fabric companies regurgitate the SAME ideas over and over again. So what one company produces today, another will produce almost identical prints next year. There's NO NEED to buy something just because you like it. I now buy it because I NEED it to finish off a project. There's a difference - a HUGE difference.
I wish I could say that using up all this fabric for the community projects or sewing it up in my projects or the occasional piece that goes to someone who needs it would be putting a dent in the stash. Not even close!!!! And I have a feeling that there's a lot more hidden away in the project boxes.
Oh, speaking of stashes, I have a picture to share with you. Unfortunately, I don't have time to load it this morning, but I'll get it prepped for tomorrow. Oh boy - this person has a LOT of time on their hands. Just wait!!!
I was happy with what I accomplished at Monday sewing. I dug out my embroidery threads, and I was busily stitching the edges of my raw applique.
Isn't this guy adorable???
It's hard to tell in the photos, but the images look so much more finished when the edges are stitched than when they are not. No - I think you can see the difference. There are five owls in total, and four are done. Well, the bodies are done. I still have noses, eyes, and toes - the fiddly bits.
Here's a close-up of some of the stitching.

That's a mossy (edge) satin stitch. It's one of my favorite stitches on the machine. Actually, I fell in love with raw edge applique when I bought my first Husqvarna Viking sewing machine over 20 years ago. With the sensor foot that pops up to pivot, doing applique is so easy.
I hope to finish the stitching later today, but there are still quite a few pieces to stitch in place, so we'll see how it goes. I do have a road trip and a couple of other things on the agenda.
I thought I'd walk past Chapter's and the dollar store yesterday as there were a couple of things that I'm looking for, and I just wanted to browse. Nope - lineups outside both stores. I REFUSE to wait in a lineup, so I kept walking!
Well, that's it for today. I've got to put my thinking cap on for another background! OH -- I just thought of another one. OK -- so that makes two that I can potentially get done today.
Don't forget the Virtual Retreat this weekend. That's Saturday evening from 6 - 9 PM and Sunday from 10 - 8 PM.  It's going to be super fun, and I have to say that the stack of projects sitting on my work table is slowly diminishing. Could they be all done by the end of the weekend? Some of them are on The Task Master for the week, and some are not. We'll see how it goes.
Part of that will depend on the gazebo! And the weather - it's cold outside today.
Well, have a super day!!!!
Ciao!!!

Email ThisBlogThis!Share to TwitterShare to FacebookShare to Pinterest
Labels: All in a Row, applique stitches, art Quilts, decluttering