How many friends do you have?

I worked very hard and was extremely focused, and I basically have NOTHING to show for it!

I'm teaching some classes at Thimbles and Things in the fall, and the registration is being done by e-mail. I received MANY e-mails, and it was a tad confusing to deal with it all. Especially when the e-mail said, "sign me up for all." And then people decide they didn't want all after all. People -- this is a LOT of administration!!!!

I had to make seven distributions lists, and each list has approximately 40 people on it. If their e-mail wasn't on my contact list, I had to make that happen!

Then I had to write a comprehensive e-mail introducing the first group to the class format, so I wouldn't get inundated with questions. I moved pictures around to help the students pick colors for their upcoming project starting in September. I made new Facebook groups, set up polls, etc.

Let's just say that I accomplished a LOT. One e-mail introduction (of three) was sent out. The second one is almost ready to go later this morning, and the third one will hopefully go tomorrow. I still need to double-check the distribution lists associated with that one. I do not have n e-mail service, so I have to be careful how many names go in one list, or I become spam!

So if you signed up for the Long Time Gone class and did NOT receive an e-mail from me, let me know. Everything else should be coming soon.

All my classes are FULL, except Long Time Gone. One or two spots may be left in Boho Heart and Gypsy Wife, depending on whether someone drops out when I confirm their registration.

I am reluctant to do this, but I must. The original pattern was called Gypsy Wife. The name has been changed to Wanderer's Wife. I was going to continue to call it Gypsy Wife; however, when I searched Pinterest, it says "no --- we don't use that kind of language on our site," or something similar to that. So Wanderer's Wife it is.

I came across something funny when I was in and out of Facebook yesterday. I happened to notice the number of friends I have.

What's this all about? I got a chuckle from that, but I've moved on! In case you don't know, 666 is supposed to be a sign of the devil!

I did sort through a bit more paperwork. OK -- so part of me falls within the parameters of my mother. I still have SOME of M's schoolwork. I'm not sure why it didn't all get dealt with before, but it didn't. There wasn't much in this folder. And here's the sad part -- I hate to throw away this folder. However, would you want to get that folder if you were going to school? Already written on by someone else? If we lived in different times and locations, this would be valuable, but here? I put it in the recycling.

I went for a massage and am happy to report that my neck is coming along just fine, but don't touch those insect bites!! I was fine until I was in the car on the way home and they started to itch like mad! They are smaller this morning but still look pretty angry. At least the largest one. The other one is not bad.
Here's the thing about going to the massage person - and it's not just him - it's the physiotherapist, the chiropractor, or any practitioner dealing with the body. If you could ONLY improve your posture. I know  - my posture is bad. I try to correct it - I really do, but then I forget. So I've got to remind myself to stand up straighter ALL THE TIME. Amazing how we get into some of these bad habits, and it feels better to slouch! I don't want to be that hunchbacked little old lady when I'm older.
And I know that it'll help my neck!
I had to fix the dishwasher again! What's with this issue coming up twice within a couple of months? I didn't find anything in the little drain gizmo, but the filter was pretty disgusting. So I cleaned it all out, and it seems to be working just fine. Make sure you clean that dishwasher filter regularly!!!
Then it was date night! Yep -- DH and I headed off to the movies. I told him I would only go on Tuesday when the prices were lower. So we were off to see Free Guy. It was pretty funny and sweet. 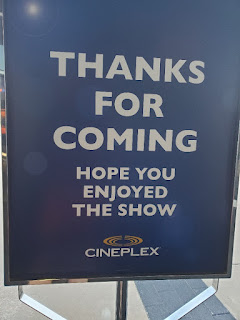 And yes -- I had a medium bag of popcorn (no butter) for dinner. I was also bad and had a medium pop. That was an adventure itself. How to make the darn machine work. Oh well - I did get that figured out.

The theatre was fairly empty, so social distancing was a breeze, and when we exited the theater at 7 PM, the lobby was the fullest I've seen in quite a while. I did go to a movie last year during a period when we were semi-open.

As promised, here are the Zoom links for the Virtual Retreat this weekend. And not to freak anyone out, but if someone clicks on those links before the date - I get an e-mail! But that's OK -- I know some people are new to Zoom and need to see how it works.

Well, that's it for me this morning. I'm off to spin class! Who said going to the gym was exciting? I'm OK once I get there - I just have to build up my new routine!

I'll be back at the computer for a wee bit this morning. I need to get that second e-mail out, and then I had better hit Studio B - I don't think I even went downstairs yesterday! The last e-mail will go out tomorrow.