My little journey in time

No power outages last night! There shouldn't be any issues with the blog getting posted, although we're experiencing lightning, thunder, and rain at the moment. And for the first time in FOREVER, both girls are about as close to me as they can get. Neither is happy with stormy weather. Lexi NEVER ventures deep into the office - perhaps she likes clean, sleek places that she can easily get into and out of. But she is sleeping about 5 feet away from me.

So you know what that means. Yep -- I've been cleaning - more pitching and purging. I'm quite pleased with my progress. There's still a LONG way to go, but I'm doing it my way, and that's all that counts.

It would appear that someone else is also doing the same thing. Look what someone sent to me the other day. OH MY GOD!!!!  Who is that person????  Yes - both of them are me!!! When I was in my 20's. What's with the hair and make-up in that one?

It would appear that something traumatic happened in my life in 2012/2013 because I seem to have a LOT of paper from that year!
I came across this invoice from 2012, where I purchased three copies of the Circle of Life pattern. I did teach a class, but not sure why I bought three patterns - perhaps to share with the students?

What is hilarious is that Katheleen just finished her quilt top for Circle of Life a couple of weeks ago. Me -- well, I've got a LONG way to go!
A parking ticket from Niagara-on-the-Lake. Probably off shopping at a quilt store and forgot about the meter.
I found MANY clipboards. It seems I like clipboards. And I pulled out a handful of paper at a time. I created many little piles - recycling to be shredded, recycling, stuff to file, stuff to take action on. I tried to keep the "stuff to keep" pile at a minimum, and I did for the most part.  I will need to go through that "keep" pile at some point and sort it, but for the moment, that's how this is happening.
It's like anything else - get stuff sorted and in the right home, and then once it's time to deal with it, it's much easier because you know everything is together. That will be a constant in my life for a long time. Can you believe I even had visions of the day that we move from this house. I think I've decided that all the furniture will be sold, junked or given away and start with new furniture. It's not that we have a ton of furniture anyway, so it's not a big deal. And there is some stuff that I won't part with yet, but beds and living room stuff? I've zero attachment to any of it.
So all of this is in preparation for the day we downsize, which is hopefully about 20 years away. I think I can get through all this stuff in 20 years - several times! Each time is going to be much easier as there will be significantly less stuff. So there won't be much to pack! I had to laugh as I took my walk last evening and passed the retirement home near me. It's one of those combo places -- apartments for residential living and the nursing home in the same complex. There was a SMALL U-Haul truck parked at the residential tower. Yep -- that will be us someday!
I found a Connecting Threads catalog from 2013. Can you tell me why I was so attached to all this paper? I'm not going to say that I'm embarrassed by it because I'm not. That was my mindset at that time. But I wonder why I couldn't throw stuff away? Oh yes -- the hoarder genes from the parents. I'm trying to banish those genes. Others I'm happy to have, but not these ones!!! 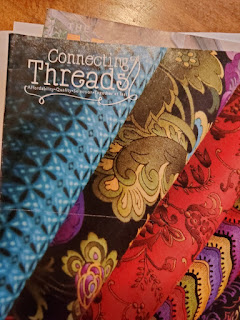 Good lord - a membership handbook from the Canadian Quilter's Association. Can you believe that they used to have a lending library? Well, I'm happy to say that all this information is now readily available online, and this is gone. I wonder what happened to the lending library?? My recycling bin is in overdrive! It's getting full again!
And this is why I don't want to just throw things away.
Now - I would be embarrassed to tell you how much money I have found in this mess of paper. I've also found a few obviously stale-dated cheques. Thankfully, none of them were for large sums of money. I was NOT good with money. I'm getting better - much better, but well - we won't go there.
So the table got down to this.

Then I pulled the last box off the chairs and put it on the table. Let's just say that it still looks much cleaner than it has for a long time, but it's going to take a while to go through the THREE boxes that are now sitting on the table. More on that later this week.
Once that was done - well, I took a break in the afternoon to do some errands. I had ordered a couple more pairs of running shoes when there was a sale, and they had arrived. I decided to grab all the boxes from the hall waiting to be donated - those boxes are all gone now. I think there were five of them. And I had a box of paper that needed to be shredded, so I was off to get that done as well.
I had to laugh when I got to Staples. Yes - they will shred paper, but I had to stuff 13 pounds of receipts and other paper through this small slot! That took a bit of time, but I was OK with that.

That little trip made quite a big difference in the house. I'll have to dig out another box soon and start filling it with stuff. I'm certain that M will appreciate this - well, she may not know what "fun" she missed.

Honestly, I cannot imagine leaving this mess of stuff for someone else to clean up. They would open the dumpster and just toss. At least, I've had a trip down memory lane, took a few pictures, and moved on. I look at it as a cheap form of entertainment!! And I get the satisfaction of getting rid of things in the way that I want to, it didn't become a burden to someone else, and I'm learning to deal with paper as it comes into the house.

All in all, it was a great day!!!! Is it easy? Absolutely NOT!! It's hard to throw away stuff that you've kept for years. Is it fun? NO - I'd rather be sewing. But am I enjoying it? YES -- what I love the most is finding a couple of treasures (and not just money), they bring back good memories, and I'm learning new skills. Skills that I should have learned when I was a kid! I also love the new openness of the space - still a LONG way to go, but I don't think too much is going to be sacred here. My goal is to get all the paper into the filing cabinet. Then file by file, I'll deal with the filing cabinet.

Yes -- there are other ways, but this is my way!

I got nothing done in the sewing department as I had a software class in the morning and then a meeting. Today is the final session of our T-shirt class, but I hope to get some sewing done after my spin class at the gym and before the T-shirt class, which starts at noon.

On that note, I have more fun things to share with you that I found, but that has to wait until tomorrow. And let's home the downpour stops before I have to go to the gym.

Email ThisBlogThis!Share to TwitterShare to FacebookShare to Pinterest
Labels: decluttering