OH my -- the car issue!! I saw another GREAT comment this morning, and I had an in-person chat about the car situation with someone else. While we could become a one-car family technically, I'm not sure we're quite there yet. In terms of use, YES, but in terms of "what's mine is yours" and "what's yours is mine" - we're not there yet! I'll tell him to start looking!!

Now -- do NOT blame if you spend some money here. Over the years, I've bought yardage on sale, so I could use it for quilt backings, or it was a fabric that I could NOT live without. I know - I've learned that I can live without it as something more beautiful is around the corner.

However, when it comes to backings for quilts, do you really want to pay $20 a meter for quilt backings? NO - neither do I. Well, I won't be buying a backing for a long, long time. However, here is some good advice, but BE CAREFUL with your credit card. I got an e-mail from a shop this morning that is having an online sale - I'm sure there are many other sales as well, as shops try to get rid of their inventory that hasn't sold in a while. The prices were in the $6 a meter range - that's perfect for backings!!!  Here's a link to that sale page in case you want to look.

And I saw a couple of panels on sale. I spotted several with smaller blocks. If you want to try that panel technique that requires SEVEN panels, using these smaller ones might work great. No need to have a HUGE project on the go and much cheaper. Your quilt becomes a wall hanging, but that's OK.

How do you know what to buy? Well, I bought a TON of Halloween because I want to make many Halloween quilts. LOL.  I wouldn't buy a lot of Halloween, but you might want to stock up on florals, prints, or Christmas, or whatever your heart desires. I saw some gorgeous deep reds and greens that read as solids, and they would be awesome backings. Don't buy tons! 3½ meters will get you enough backing for a generous lap quilt.

My thoughts on wide backings? I HATE them. Why? First - people tend to get them right off the bolt and deliver them to the long arm quilter. However, was that backing cut straight? Was it twisted or badly rolled onto the bolt, so it's wrinkly like crazy? I do NOT iron that stuff out. If it's wrinkly, it goes on the long arm wrinkly. The quality of some of the wide backings is questionable.

And the other thing, unless your quilt is HUGE, I think it is a big waste of money and fabric. Where else will you use the rest of that wide backing? Some long arm quilters might love them, and the wide backings are great, but you can't just buy them and dump them on the long arm quilter to deal with. They need to be trimmed and pressed and make sure they are square.

I make most of my quilts in the 60" by 72" range.  To make the backing, I take TWO pieces of regular yardage that have been cut to 66" long. I trim off one selvage from each piece and seam it, so the seam is horizontal on the quilt. The two combined widths of fabric will be about 80" long, so plenty long enough for that 72" quilt. One seam, NO calculation, and you are good to go. It takes about 10 minutes to make a backing this way. And always easy to find yardage on sale.

Anyway -- have fun shopping at that store and watch for others. Do NOT stockpile backings unless you have the room for them, but there is NO NEED to pay $20 a meter for backings. And if there isn't enough of one fabric, then buy smaller pieces, join them together, and then cut the 66" pieces, like I do for my lap quilts.

This is why I won't get the table in the dining room clear by the end of the month. I seem to be able to work in other areas, but not the one I've designated!!! I don't really care - as long as I'm tidying up and getting rid of stuff.

I have three huge tubs of Christmas stuff, plus a box of ribbons and bows, one tub of Halloween costumes, a box of ornaments, and two other boxes that got moved before this picture got taken. All that resides in a corner in the living room. Yep -- in plain sight for anyone who comes in to see. Well, I want it gone!!

I opened one cardboard box to find MUSIC. Oh boy!! That was a trip down memory lane. Like many of you out there, I'm sure a number of us took the Royal Conservatory of Music classes. I made it to Grade 8, and I stopped there. Let's say that I could play, but I didn't play from the heart. It's just not in me. My piano has been gone for years.

And who remembers those Reader's Digest books of music??? And there's my "friend" John Denver. I love his music and was very sad when he was killed. The other piece of music - looks old - right??

Well, it's officially an ANTIQUE.  Look at the date!!!  That piece belonged to my Grandfather and is dated 1920. I think he would have been a teenager at that time - I believe he was born in 1901. This was the oldest piece I found, but there were others dated in the 1920s!! I have two drawers partially filled with other sheet music and books. I have set aside some for my friend who does journaling, and the rest went back into those two drawers. I KNOW -- I should deal with it all now, but I don't want to. Oh, don't worry -- I have a BIG bag set aside for her!
What I did was free up this box. This is my new donation box, and it's already got stuff in it. Plus, there are two lamps that we NEVER use, so those are going as well as the box when it's full.
I also knew that I had a tub of fall decorations in that corner. I don't hang this stuff up any longer, so the decorations went in the giveaway box. That freed up this nice plastic tub, which I promptly took downstairs.
I have two cardboard boxes of fabric that I brought back from my Mom's. Now one of them is in this plastic tub. This is mostly crimpoline (we called it Fortrel) that I wanted to make a quilt from in honor of my Mom, who wore this stuff all the time (and still does)! There's also a LOT of tie material in the box that I got from my Aunt Irene.
And now that tub in under the long arm with the others. Those ten tubs will be dealt with at some point. They are not technically part of my stash. So as Diane finishes up with stuff that she currently has, I'll be cracking open these tubs and giving her more stuff to sew. Don't worry, Diane -- we'll never run out!
In the box of fall decorations, I found this gorgeous orange bowl. I couldn't part with that - it's too beautiful. What to do with it? Hmmm -- I could put it on the kitchen island for fruit. It's a bit large, but that's OK. It was filled with plastic fall-colored leaves. I kept those as well. You never know -- I could make a quilt using those leaves!
The white one that my Mom made is a bit small for the job.

Now, my goal is to deal with Halloween costumes. There is a bag, 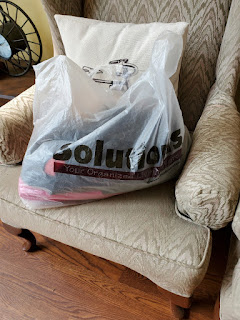 and a box, as well as that big orange tote. We will NEVER use this stuff again, so it's time to get rid of it. Does anyone want a fun fur bear or leopard costume???

I have to laugh as I check my distances every morning for the virtual challenges. I'm less than 50 KM from the end of the Appalachian Trail. I'm so excited and still debating which one to do next. But here's the thing -- we are out in the middle of nowhere in northern Maine, and the GRAVEL roads are mapped with Google.
Yet, in Northern Canada, the ONLY road that goes through Northern BC to the Yukon is NOT mapped!!!! That's hilarious!!! 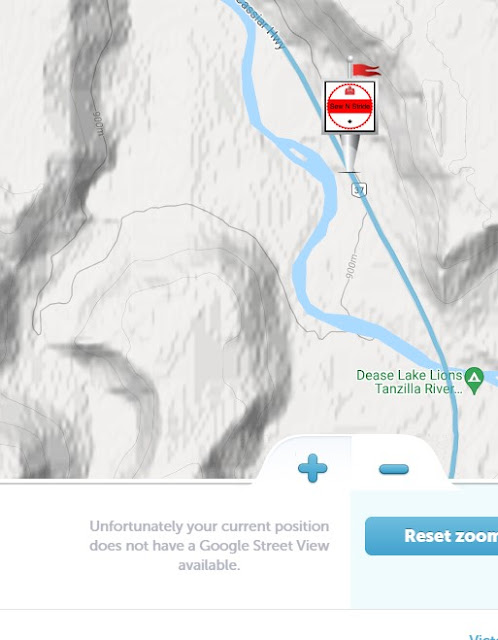 I had two great classes last night and one more this morning. I feel sort of deflated - no mad panic to make the final touches on the presentation. Instead, I'm working on the notes! It's positively weird! But that's OK. I hope to get the other two sets of notes done today to cross that off the list for this month and move on!!

There is NO time for delaying on stuff like that.

I tried a ROOT yoga class yesterday. Hmmm - -I'm not sure I'm going to like that one. This instructor had us spend the first 15 minutes on our knees, and my knee just wasn't happy. And it's a bit too fast for my liking, and I HATE when they say, "now continue the flow on your own". I NEED guidance - I don't remember this stuff!!!

I might just stick with SURRENDER, which is much slower-paced. I'll see how it goes. My knee has been good lately. Well, for someone who walks as much as I do, my left leg is pretty messed up, and I need to keep it loose, or I'll be in big trouble. I see myself at some point having to give up walking and just ride my bike. What's wrong? I've no idea -- but it's my knee, my hip, my muscles, and my leg will just give out frequently when walking. I haven't fallen yet, but one day, it's going to happen. So I have to be careful. So if you see me with a  walker one day - you'll know it's for the support! Keeping moving helps, but I can't overdo it. We have knee/hip issues in the family, so it doesn't surprise me.

I might get X-rays at some point, but I know they will say arthritis, so let's just walk through the discomfort. I'm good with that. I'm not stopping to do what I like for a wee bit of discomfort.

Don't forget we have a virtual retreat tonight and tomorrow. I can hardly wait, and I think I'll spend some time this afternoon cutting up TWO projects that need to be done pretty quickly. Actually three - there is a block I need to get done as well.

I've made HUGE progress on the homework quilts, and as I share the homework this week, you'll get to see that.