Another great day with the Monday sewing group! I'm learning to get so much done. At the beginning of these Zoom sewing days, I will confess that I spent a lot of time chatting. Well, now I'm able to sew a lot more, and I accomplished a LOT towards the magazine quilt that needs to be in the mail by Thursday. There wasn't too much of a rush to finish it since I didn't even have the border print or the backing yet.

I got a notification yesterday that it should arrive today. I wasn't panicked before, but now I have no excuse to not get this thing done on time! Two of the three sets of components are done. One more to do today, add the border, quilt, and bind it tomorrow, and all is good!

Then I have two more rush jobs, and then - well - I'll be back to doing presentations next week, and there's still a bit of tweaking I want to do.

All in the fun of learning.

Two unforeseen things happened yesterday, and both of them were GOOD. The first - I got a call from Diane saying that she will soon need more fabric to sew into community project quilts. Now that is MUSIC to my ears. I knew exactly what I was going to give her, and I dug it out. It was in one of the tubs under the long arm.

I went through it last night - oh boy -- I think I found at least 11 panels and tons of coordinating yardage, so she'll be making many panel quilts!! BUT -- look what else I found.

I found NINE identical panels. Now here's the best news - these are ¼ the size of a regular panel. I have wanted to make one of those one-block wonder quilts with a panel, and this is going to be perfect. It won't be huge. I'll have to scale down the size of the units that I cut, but that's OK - I know how to do that. I cut two of these off and put them in the bag for Diane to deal with, as I only need seven panels.

So now, I have an empty container.

And I also had one more cardboard box downstairs. So I transferred what was in the cardboard box into the plastic tub, and now it's nicely tucked under the long arm. HA -- I WILL get this mess under control. But one day, I will have to deal with the scraps from the sewing that Diane has been doing. There isn't much, and there are still a few strings to deal with. But it's mostly under control, except for the number of quilt tops to quilt. I think I'd be willing to part with the scraps if anyone is a scrap quilter and wants to make something. I don't want it going into your stash --- you would have to use it up!
So what was in that cardboard box? Well, it was stuff I shipped home from my parents. It's filled with crimpoline or Fortrel, as I call it. And look -- there are a huge number of squares already cut!!!!

My intention is to make ONE quilt from this stuff. A good memory of my Mom and well-- Victoria Findlay Wolfe has a crimpoline quilt - I want one too!!

I have some large pieces for the backing, and well - does anyone want some crimpoline?

The decluttering didn't stop there. The second thing that happened was I pulled all of the geocaching stuff off the shelf in the office. That opened up a space on the shelf.

OK -- so technically, it doesn't seem like I opened up some space, but on the shelf second from the bottom, there's a lot more space than there was before.
This is what I removed from that space. I have a small backpack, a box, and some Ziploc bags - all filled with geocaching paraphernalia.

I'll share with you what's in those bags and boxes as I go through it. Hey -- if you don't care -- it's one way of me documenting the memory!

Previously, before phone data was super cheap, you didn't use your phone for geocaching. I don't think there was even an app - but you could access the geocaching website through the browser on your phone, and we did from time to time. Anyway, we used to use a handheld GPS - the kind that a hiker would use. And that meant you needed to have the coordinates with you or at least some information for each cache. Look what I found.

Here are the names of two caches with their identifying code. Gullfoss -- do you know where that is???? 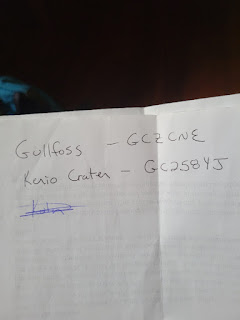 Yep -- that was from my trip to Iceland in 2010. Hmmm -- a bit dated. Kerio Crater is also in Iceland. I did get both of these caches. Well, I think I got them -- I'll have to back and check. Hmm -- I just checked -- Gullfoss was an Earthcache, and it's not marked as found. I was probably too lazy to do the math or whatever was required!
But here are the countries where I've found caches. You have to love logging all this stuff in the computer because it stays there forever!!!! 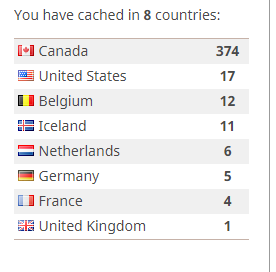 And then, I found several pages with lists of caches, the coordinates, and the names.
And this was the other way we used to identify them - print out the page and take it with you. Good grief -- we've come a long way!!!!
Look at the dates -- I don't think I need those caches any longer. Well, at least not on paper. Should I choose to visit them, I can use the app on my phone.

So while I wasn't focusing on stuff on the table, I still got some decluttering done. I know that's what will happen; I'll keep piling stuff on the table until there is nothing left to pull out. I'm OK with that - the almost empty table scared me!!! Bit by bit, depending on my mood -- I WILL get this mess cleaned up!

On the weekend, I quilted a quilt for Quilts of Valour, and now it needs to be trimmed and bound. I might get to that later this week. Those three urgent projects are my priority this week. And I need to get the acknowledgment out to the Saturday Sewing day at Thimbles and Things. I don't even want to see how many are on that list.

With all the rain we've had this year, this part of the path is once again - a mess. This is a small part of the path with NO TREES on the path for obvious reasons. Imagine a deforested hillside - what happens to it when torrential rains hit? Oh yes --- it's not pretty. What I don't understand is why has there been so many problems this year? We've had torrential rains before but never had this erosion problem. At least not to this extent.
And seriously -- how could you not love this dog. When I walk Lexi, she waits by the window!! Such a big goof!!!

The humidity finally broke with that last storm. Yeah!!! I don't mind the heat and the humidity, but it was getting tiresome even for me. We should have some gorgeous walking weather this coming week, and well -- I said I wanted to get out for a hike, and I'd better go before winter gets here!

On that note, I've got a busy day. Can I get the third component of that quilt together BEFORE the package arrives? I might - no, I won't!