Oh my gosh -- I almost made my goal yesterday! And I would have except that this had to happen first.

I participated in the Barn Quilt Block sew-along at Thimbles and Things last year. Each month we listened to a presentation and were assigned a new block. Knowing that barn blocks are random colors depending on what the owners chose, I decided to make my blocks a bit more cohesive in color. I also didn't want to make 18" blocks, so I had to downsize all of them to 9". That was a bit of a challenge, but except for one block, I could redraft the block in EQ8 without needing the original instructions.

We were assigned the final block in August and had until the end of August to make that happen. Yikes -- yesterday was the end of August. Thankfully my block was mostly cut out, and so that had to be stitched together BEFORE I could get back to the magazine quilt.

Look what I accomplished by noon. There are a LOT of pieces in this block.

WOW -- I love this block. Let's just say that it was a size that resulted in a lot of small uncommon-sized pieces - 1 5/8" and units that squared up to 2 3/4". So you had to be on your toes! But I got it done and took pictures. I added in the information for the bonus this month, and hopefully, later this week, I'll get confirmation that I completed my task.
The new session starts in the middle of September!
Here are all the blocks that I made this past year.
We were assigned 12 blocks. Two of them were applique, and I decided that I didn't want applique in my quilt. So I didn't do the bee block, and I switched up the hemp block to make one maple leaf that I'll use for the label.
We'll be getting another 12 blocks assigned this coming year, all of which I'll have to resize. I only need another 7 blocks for the layout that I have in mind, but I'll make them all, and then I'll see - I might change the layout - depends on how the blocks look.
I love it -- they look awesome, and I'm thrilled with my decision to make them smaller and make the color more cohesive.
Speaking of color, now that things are a bit more organized in the office, I have a stack of reading material, and I grab something from that pile when I'm eating my lunch. Some of it's older, but I don't care -- I often look for inspiration. I happened upon this ad yesterday from a publication in 2014.

I know these photos and colors are not close, but this is how our brain works from one image to another. As I flipped through and saw that splash of color, it reminded me of this fabric that I had seen in the most recent Lookbook by Figo Fabrics. This is a new collection by Kathy Doughty called Kindred Sketches. 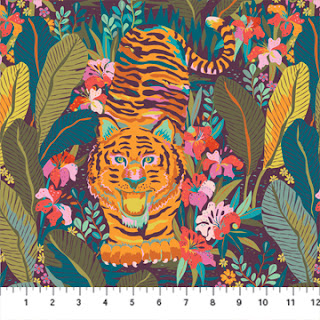 I can't say that I'm fond of the collection, but that's OK. Some of the prints look like wallpaper! But what's old is new, and I'm sure there'll be loads of people going gaga over the giant tiger.
It's amazing how designers seem to use the SAME colors over and over again. If you go back into the Lookbooks and check out a specific fabric designer, the base colors are the same, the little motifs have changed. I'm not into that at all. What's the point? And especially if I haven't had a chance to use up what I bought before, why would I add more of the same color?
I just realized something. I USED to buy based on the motif. Cutesy prints or gorgeous flowers. Now I buy the fabric because of the COLOR, not the print. Weird -- I never thought about that before.
OH -- back to my magazine quilt. After the barn block was completed and send, I went back to the magazine quilt. I hadn't started to cut the fabric for the third component to this block. So I cut and sewed and cut and sewed. I had TWO little blocks left to sew and had to stop for a meeting. During the meeting, I got a notification that my package had arrived, and sure enough, when I turned off the computer, the box was on the front step.
So I finished all the blocks and started to sew the rows together. By this time, it was 8 PM and well -- I had sewed all day, and I was done. I will say that I used Marti Michell templates for cutting out the entire quilt. What a HUGE time saver. Perhaps it took a wee bit longer to cut, but sewing it together was a dream. If you have NOT tried those templates before, they are convenient to have around!!!
I finished off the little pinwheel blocks, and I counted them.
I now have a total of seventy-seven blocks and two half-square triangles leftover. Hmm -- what could I do with those? Now that this much is done, I can put it in my subconscious and hope that something comes up! I think I'll put sashing between them. It'll make a bright, cheery wall hanging, or could they be used for a border on a quilt?
I had to laugh when I saw this in the backyard. Murphy has indoor toys, and well, some of those indoor toys became outdoor toys as she loves to take stuff outside. This bear is definitely an OUTDOOR toy. She runs around with it, and we never know where we are going to find it. It was propped up on the steps like this as if waiting for something. Pool little bear is missing his eyes, but Murphy doesn't care. We call this bear her stress bear. She sometimes grabs it when she's in trouble.

I have to say that the weather is glorious. The nights are cooler, the days are warm but not humid. I love it!!!!
Well, I'm off to spin class and then back for an intense day of sewing. I don't think I can finish the quilt and quilt it today, but I'm going to see what happens. At the very least, it needs to be on the long arm by tonight, and I'll quilt it tomorrow morning. And then onto the next urgent thing.
Have a super day!!!!
Ciao!!!