What a GREAT day yesterday was! I did spend quite a bit of time (hours!) on the phone chatting to several people, but sometimes that's a necessity! I felt better; hopefully, they did as well. And one call was extremely motivating, and well, I'm just like my Dad -- I LOVE to talk. I think that's why Zoom works so well for me -- I get to talk! I don't need hugs - I just need to talk. But I listen also!

OK -- so I tried sleeping with the tape on my lips. It wasn't really a big deal. However, I did wake up at one point and realized that it was no longer on my lips. Oh - I had visions of it stuck in my hair, but no, when I checked, it was neatly attached to the side of the night table. At some point, I must have said,  "Enough of this nose breathing - let's OPEN that mouth wide and breath deep! I'll try again tonight.

I must say that I didn't wake up or if I did, I don't remember waking up. I feel full of energy. My nose is a bit dry, but not bad - I think there's a bit of an allergy thing going on. Technically, I'm allergic to dogs - or I was when I was a kid. But since having FIVE dogs in the house over the years, I've probably gotten over that little issue.

The day started off with my class for All in a Row. I'll post more later this week, but I just LOVE the way my quilt is turning out, and I have to share it with you.

One more row needs to be added above the owls or between the top two rows. I'll have to see when the row is together. That row is all cut out, and I hope to work on it today at Monday sewing.
I started the applique on the inner border. I've decided to make all or part of almost all the rows in the book. Hence -- there will be three quilts! I think there are 23 main rows and 11 filler rows or something like that! Good grief!! This one is the row quilt! I'll be using TEN of the rows in this quilt.
What I have learned over time is that I LOVE brights. Yep  - rich, saturated color is the way I go for most quilts. There isn't as much contrast in some of these rows as I could have used, but sometimes, the value of the colors pulls it through. And that's OK. It's all in the eye of the beholder, and if you like it that way, then that's the way it should be made!
I'm doing the appliqued border by machine. Hey - if you've got a machine, then do it -- it's so much faster. The thread that I used happened to be the EXACT color of the fabric, so if you look REALLY close, you'll be able to see the elongated zig-zag stitch that I use to do my invisible machine applique.
This is the back of the project.

Hey -- do you want to learn to applique like that? I'll be running an applique class starting in January. It's a quilt by Jen Kingwell called Sweet Tea and Green Beans. There are LOADS of applique blocks in that quilt, and we'll be using a variety of prep techniques and hand or machine techniques depending on which method suits which block. It's a sew-along that'll run most of 2022, so we have lots of time to get it done. Here's a picture of the book. If you want to join in January and do NOT have the book, I'd suggest that you get yourself a copy of the book. It comes from Australia, and it may take a while to get here. You can order it from Thimbles and Things, or you can find it on the internet somewhere. 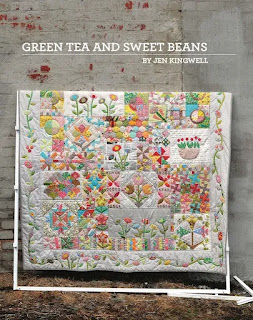 I'm not really a fan of the quilt on the cover. I need more contrast than that, and I've realized that this jumble of prints is not me. I've been working on some samples, and OH MY   - -they look awesome. No need to rush to sign-up. I'm not ready. I've been working on getting the presentations together for BOHO Heart and Wanderer's Wife (also by Jen Kingwell). That class starts this weekend, and I can't wait to share my thoughts on colors with them. I've been scouring the internet for examples, and OH MY   --- we have LOTS to talk about. That class is FULL.

I'll let you know when you can sign up for the Green Tea and Sweet Beans class. I have another class that I'm running -- Oh yes -- The Butterfly Quilt by Tula Pink. More on that another day -- I'm waiting for Tula to rerelease that pattern. It should be soon.

Then we had our embroidery club. Oh my --- what excitement! I can hardly wait to get started on my assigned project. Well, I assigned it to myself! And there is no deadline, but I want to get working on it.

Step One in the process was to make a list of my personal goals for the embroidery club.

Now I know that SMART goals have a timeline attached to them. And only one of these has a timeline. I want to get that Halloween quilt quilted before Halloween! I'll work on the remainder of the timelines later. I need a place to hang this timeline, so I don't forget the techniques I want to learn and the projects I want to work on.

The first step was to put together all my Kimberbell patterns and accessory kits and whatever else I could find that was Kimberbell.

I think a few accessories or trims are missing from this, which I'll add in a day or two.

I chose the project that I'm going to work on. There is a series of Bench Buddies by Kimberbell. There are two little pillows for each month. The January ones are DONE, and they are so adorable that you just want to hug them even though they are tiny. The square pillow is about 8" square. There are two options -- do them with Machine Embroidery or do them with traditional sewing and applique.

As I was running through the collecting of Kimberbell stuff, I found that I have started the pillows for March and April, so my goal is to finish those for next month. Remember that scrap box of red fabric that I found the other day? That was to find the reds required for the February pillow. Well, I can easily get the reds out when I get to that point.
Let's just say that it was a super exciting day, and all I need is a wee bit more time! But I'm OK with doing a little bit every day. If I got everything done -- what would I do with myself? Oh no -- I like the anticipation of working on the next project, but I also like the puttering of working on what I currently have to do.
And I get joy out of the smallest things. I love the look of my heaped scrap pile! I do think it's time to empty it, but doesn't that look fun? 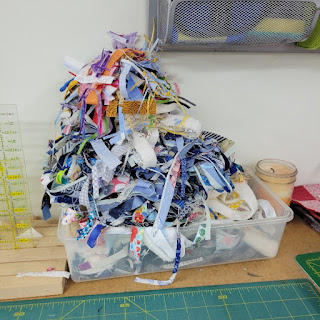 And I'm a sucker for punishment. I'm off to spin class this morning. Yes -- it's only Monday, but my favorite instructor, Joseph, has added a second early morning class on Monday. So I'll be off in a bit for that morning's excitement. I'll be getting my vaccination papers put onto my account, so I don't have to worry about that going forward.

Then back for Monday sewing, and then I need to buckle down and get some writing done. It will be an intense week with major writing to do, machine embroidery, FIVE presentations, including two of them in French, and prep for the FOUR quilts that we'll be discussing before the end of the week, as well as my presentation on borders.

Yep -- no end of excitement at my house. Oh -- did I mention that I need to get a couple of quilts quilted? And you wonder why I have no time for paperwork or cleaning up the office! But I am getting the paperwork done - just not as fast as I would like, but I'm trying to stay on top of it, or it'll just get out of hand!!

I don't normally mention stuff like this, but I can't help myself this morning. Some of the Emmy awards were awarded last night, and a certain interview was nominated in one of the categories. I checked the list of winners with great trepidation, and to my great relief, it did NOT win. I know that might be perceived as mean, but seriously - for people who say they want privacy, they do not know the meaning of the word. Oh -- they want privacy, on their terms!

Did I mention that I wrote a polite note to one of the owners of the Emmy Awards a while back to express my utter and complete dismay that this kind of show would even get nominated? As I said, I was polite, but I was clear on my thoughts. Hopefully, others did as well. Our society has gone to chaos when people deem this is worthy of an Emmy nomination. Sigh..................

Email ThisBlogThis!Share to TwitterShare to FacebookShare to Pinterest
Labels: All in a Row, Kimberbell, machine applique