WOW -- more great advice in the comments. I used the humidifier last night. My nose is still dry, but not as bad as the night before. Gels? Sprays? Oh boy -- I guess I need to go to the drugstore. I don't pay much attention to all that stuff; hence - I have a dry nose! But I'm trying to be much more conscientious of whether I'm breathing through my nose or mouth. I'm definitely a nose breather.

OK -- so yesterday was a bit of a humbling day. Besides doing one presentation, I didn't get much else done. I had to take my MIL to the hospital for her mammogram. She goes to the Cancer Center. After parking the car, I waited outside. The number of people who went in and out of that door was unbelievable. Young, old, male, female, ethnic background, etc. And so many of them were frail, needed wheelchairs, canes, walkers, etc.

I need to thank my lucky stars for my health! I'm feeling in excellent shape these days. Ever since I complained about my leg, it has behaved just like nothing is wrong with it! I know it's all about stretching, so I must keep on my toes about that.

I had to wait outside for 45 minutes (they were running late), and well, it was humbling. I had to stand as I left the benches for those that needed them. Wow --- I really am lucky, and I have no reason to be complaining about anything!

Now here are some wise words from my MIL. She is used to doing something every day. She is probably the neatest and cleanest person I know, and if she's not cleaning, she's sewing. But I learned that without having something to sew, she loses her motivation to get anything done! Who knew? So she has been begging for stuff to sew.

I gave her a small quilt to bind yesterday.

And today -- well, I've got more stuff to give her. This is what happened. I got all the string piece blocks trimmed! I think there are 80 blocks in this stack - all ready to be turned into a quilt.

Yes -- that means it's time to empty the scrap box again!

And I trimmed the Quits of Valour quilt that I quilted a whole back. So she can have that as well.

That will keep her busy for a day or two. I'm also going to give her some of the flannel scraps. I need to cut them to the correct length, and she can sew them together to get blocks, which I'll trim down, and then they can be used for more quilts. I'll share that process with you tomorrow.

It's amazing how the brain works. There are days when I give her something, and I wonder how she actually gets it done. While we were in the car, I explained what I had for her -- the quilt to bind. She was confused and had no idea what I was talking about. Then I showed her. Oh - a blanket! Yes -- as soon as she saw what I had, she knew what to do. She knows her sewing, but her mind is not all there.

And she's getting a new knee in a couple of weeks. So that'll slow her down a wee bit. Anyway, it's a challenge to keep her busy, but I really need to take advantage of her. I mean that in a good way -- make use of her skills, not take advantage.

I finished the little project that I need to get done NOW. It's loaded on the long arm, and I'll quilt it this morning, and I hope to bind and get into the mail by the end of the day.

There's more stuff to do -- there just doesn't seem to be enough time. But as per my MIL, if you don't seem to have a deadline or you don't have specific things to do, you tend to not get anything done! I know that feeling. That's why I'm not ready to retire yet. I need to get all my UFOs under control first! And more work got piled on yesterday as we prepare for a brand new series of presentations -- this time for the serger!

I had to "fix" two things yesterday. One was my latest quilt I sent to the US. It got stuck along the way and needed some TLC (lack of paperwork). I was a bit miffed at UPS. The tracking information said that they tried to contact me TWICE, and well, they did not. And it sat in some warehouse for FOUR days before this issue came up. Good grief!!! It was scanned last night at 3:05 and is marked "on the way," but no set delivery date yet. I'll monitor it today to see what happens.

Now here's an issue about privacy laws. I recently booked two airline tickets - not for me, but I paid for them. I needed to add Mr. Bear to the confirmation number. Before I could do anything, I needed to confirm the names of both people exactly how they appeared on the ticket. I couldn't remember the last name of my daughter's boyfriend. And they would NOT let me add the dog to the tickets. I was the one who BOUGHT the original tickets - nope, not good enough. The agent was also pretty adamant that I have the EXACT size of his kennel. I didn't have it and was going to fudge the numbers according to their requirements.

The call got disconnected. That was after I had waited almost two hours to talk to someone. Fortunately, they have the call-back option, so it's not like you are waiting on the phone. I had to get the information and then initiate another call, which also took almost two hours to get a call-back. No big deal. I gave them the information and booked his ticket, but that agent couldn't have cared what size his kennel was. He's a teeny dog -- she said, "I'm sure the case is soft-sided - they all fit under the seat!" I love her!!!

But those two items took up a lot of mental capacity in the afternoon, and not a whole lot more got done.

I decided that I needed to do a bit of tidying. It's getting rather cluttered in Studio B. So this morning, I emptied this container. It was filled with fabric from the same lady who started the double wedding ring quilt. I found a home for all the fabrics that were in there. Some will go to Diane to help with making quilts for our community projects. And the larger pieces will be used for quilt backings. There was also a HUGE piece of canvas - not sure why she had that. I kept that piece. Actually, there were multiple pieces, and I kept one piece, and I know someone who might use the rest.

Now what to do with the empty container? Well, I have a box of quilt tops that need backings and bindings, so I emptied that box into the plastic tub.
OK --  I lied - I actually have TWO boxes of quilt tops that need backing and binding. Oh - some of them need borders as well. So I put as much as possible into the plastic tub, and there's still some in the box.
Both are now tucked under the long arm until they get done eventually! I could make that a UFO goal one month -- clear up that!

Since those silly girls are such a big part of my day, I have to share this with you. I tried to keep them out of this blog and only on Lexi's blog, but she's so lazy - she says "she doesn't have time."

Lexi sure loves to stop in at the church in the morning. We don't wake that way every day, but now she wants to stop when we do. I did say "yes" only because there were a lot of flowers.

The minute we got home, she went out into the backyard and sat in the shade. It wasn't that hot, but I guess it was for her. Normally, she loves to stretch out in the sun! Amazing how dogs know that the shade is cooler to sit in than the sun!
And someone was talking about how much a dog sleeps during the day. That would NOT be Murphy. This is her for most of the day. Standing on guard in the backyard to make sure no rabbits or squirrels enter her territory. And see that little rock in front of her? Yes -- she stole another rock from the neighbor's yard. Little monkey!!!
And where's Lexi? Oh -- the princess is sleeping. Shhh!!!!! She loves to sleep in that kennel. Murphy knows that it's off bounds for her, and Lexi will often run in there when she wants to get away from Murphy. Murphy has poked her head in, but I've advised her not to go further. It may not be pretty! 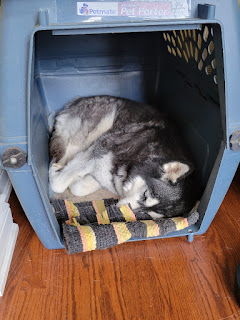 Oh my -- it's late! I've got to run. It will be a super busy day with NO commitments to anyone and hopefully, NO phone calls to make; it should be just me!! Wait - a couple of people are dropping by to pick up stuff, but that's OK. I can deal with that.