The walk with the girls was a little different yesterday. It was the first day of school, and there were lots of extra people around! ACK! Although I think there must still be loads of people keeping their kids at home, or they staggered the start times yesterday. The amount of traffic was not nearly as crazy as a normal first day of school. While I did see loads of people walking their kids, there were still many cars!!  I haven't spotted the speed cameras yet.

I guess we'll be making 'new" friends as we start to see the same people every day.

Miss Lexi likes taking that little detour into the churchyard to sit on the bench. Wait -- she goes in to sniff the flowers! It must be that she can smell the people who handled the flowers. Anyway, I was sitting there contemplating life yesterday. When we got up, I noticed a man was patiently waiting for his turn on the bench. When we left, he went and sat there.

However, I think he went to sit and stretch. I see him almost every day. He's a large gentleman and walks with a very pronounced limp. But we wave or say hello every time we see each other. The other day, I had just passed him and then I heard something behind me. He had stopped to sit on a small post. OH! I shouted if he was ok? Yep--- just stretching his back, so I suspect he stopped on the bench at the church to do the same thing.

He must think I stopped at the bench for religious reasons when it was just that Lexi wanted to smell the flowers! 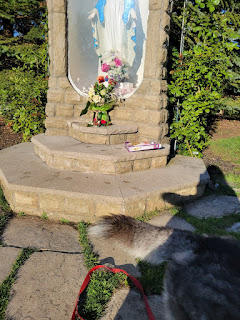 The sad thing is that twice now, I've spotted food containers at this spot. There is a community cupboard at the front of the church. Leave what you can, take what you need. And it appears that someone is taking stuff, zipping to the bench, and eating it. Well, if they need it, I guess that's OK. I hope the packages are empty - I haven't checked.

I was almost home with Muprhy when I spotted my neighbor coming towards me. I must say that my gut clenched a wee bit. We moved over to give her room - we do that with everyone since Murphy is overly friendly. She said "good morning" and SMILED. I responded likewise. Baby Steps!!!!  And you know what? It made me feel good! It means there is good in everyone. Sometimes, it just takes longer for it to surface.

I had to laugh when I went for the afternoon walk. I have finally got my wireless earbuds to pair with my phone. So I put them in, and I went for a walk. OK -- so I don't miss my wired earbuds anymore. But change is hard to deal with! I had a few phone calls to make. Well, over 5 KM later, I made it home! Ooops  -- I wasn't even paying attention to what I was doing!

But I had to laugh when I got home and was looking at my Fitbit stats. Notice the amount of KM  - yes -- that says over 16 KM. And then look at the message in red. Hmmm --- obviously, that's a generic message. I think I surpassed the 30 minutes of physical exercise. But did you note what it says? Repetitive physical activities can help you relax? That must be why I'm so lowkey on most things! That or I'm just too tired to care!

My presentation went beautifully yesterday. I added in my little samples, which worked out amazingly well. I love making technical samples. You know - trying different thread weights, etc. I much prefer doing that kind of thing to doing projects. OK -- I like doing both!!

Now I get to do the same presentation tonight but in French! I've got to switch the computer, and the phone to French before that happens.

And it was so nice to know how to connect my new phone t the computer. I just had to Google where the new command was, and I was good to go! I get smarter every day, but still so much to learn! Just as long as it keeps working, I'll be happy!

I did NOT get any sewing done yesterday, but here's the picture of the flannel quilt. The bottom two rows need to be stitched together. I hope to get it on the long arm this weekend. That shouldn't be a problem.

After spending the morning running around and getting that presentation in shape, I spent the afternoon quilting this quilt. As you can see - it's a T-shirt quilt.

I was a bit worried about it - there were a few little issues with it. But it worked out OK. However, I had to babysit it the entire time, just in case. Now to trim some quilts today so they can be picked up.
Speaking of the girls, this was where they were when I got up from the computer yesterday morning. Shoot, that light from the door makes them look dark!
Hmm -- they look guilty! "Mom! We're not guilty, just waiting patiently for you to take us for a walk."
Well, it's my crazy morning, and I'm off to spin class. I'm trying a new food arrangement this morning, so I don't run out of gas. There's nothing worse than trying to run on empty, which makes me wonder how people can skip breakfast or any other meal for that matter. My body screams "feed me" almost all the time. But I guess it's what we get used to! I've NEVER skipped breakfast.
Remember to smile and say hello to someone today! I have to tell you this totally embarrassing story. But when I was younger, I was so shy, it hurt. I used to work at the headquarters of a major bank in Montreal, and we had a cafeteria there. I didn't have a lot of friends, so I usually sat by myself. There was another young girl, and we often gravitated to the same table. We were both so shy that we couldn't say hello or talk to each other for months. Then we did break the ice. Seriously??? What was I so afraid of?
Now I say hello to perfect strangers! It makes me feel good to do that!
Have a super day!
Ciao!!!!