I told you yesterday was a great day! And today is going to be just as great!! The temperature has dropped significantly, and the humidity is gone. One little trick that doesn't make the heat so unbearable is that since we don't use the AC, we are more acclimatized to the high temperatures. That way, the backdoor is open for the girls to come and go, we don't suffer as we go inside and outside, and we can enjoy our backyard as if it's part of our house, which we do!

Having said that, if the temperature would stay like this all year - I'd be happy! I spent a fair amount of time in the backyard, which gives Murphy an invitation to play ball. That's all that dog ever wants to do - play ball! She's a dog gone mad! Don't worry -- she tries to play ball in the house as well!

She's a very SMART dog. She knows she is not allowed in the pond, but she has no issues dropping her ball into the pond and then asking me to get it for her. Sometimes, she gently dips her paws in so she can bob for the ball. However, if the ball gets pulled into the skimmer, she goes and sits right there.

Or then she intentionally drops it in a small opening at the side of the deck. It's too narrow for her to get her nose in there.

Does she do this on purpose? Oh yes, she does!!! You see, I've told her that I'm not playing fetch if I have to pry the ball out of her mouth, so she's good at dropping it at my feet. I suppose she thinks I'm getting lazy, so I have to get out of my chair when she drops the ball in the pond or in the deck! What a dog!!!!

It's like she's a trained dog - like those cadaver dogs -- when they think they've found something, they are often trained to sit and wait! They don't go crazy and bark! Neither does she! She knows I'll spot her! What a big goof!!!! And she NEVER gives up!

Oh, before I get to the other stuff, here's one more picture from the Celebrity Quilts. This is another one that I did - a Tribute to Kalen Porter.

Here's the information in the booklet:
A Tribute to Kalan Porter
An 18-years-old college student from Medicine Hat, Alberta, Kalan Porter, won the Canadian Idol competition in September 2004 and immediately signed a recording contract with Sony/BMG Music Canada. Classically trained on violin, viola, piano, and guitar, his first single, "Awake in a Dream," is the biggest-selling single debut ever for a Canadian artist. His debut album, "219 Days", has reached amazing triple platinum status. He has toured right across the country to sold-out venues and was voted "Favorite Canadian Artist of the Year" at the 2005 Much Music Video Awards.
Size: 65" by 73"
Let's say that I suffered a lot with this quilt. You see, there were two women -- two GROWN women who were friends with the person who founded The Quilt project. They were interested in Kalan Porter -that's an understatement - they were infatuated with the guy. Anyway, they gave me one of his concert T-shirts and were quite pushy in how I made the quilt. They enquired from time to time - I know that they wanted to buy the quilt. When I finally sent them a picture, I got back the MOST SCATHING e-mail I have ever received. The insults went on and on -- How could I call myself an artist? - I had ruined everything - blah, blah, blah.
I was totally taken aback, and I was in shock. Should I tell Carol, the founder? These were her friends. I was NOT making the quilt for these two women (and I use that term generously!) I ended up not saying anything publicly until now! I'm over it, but it cut right to the bone when I read it. These were PROFESSIONAL women. I wish I had spoken out and embarrassed them for the unprofessional, infatuated people they were, but I did not.
What helped the situation is that the quilt sold for $2,800 at the auction, which was the highest price paid for any of the Celebrity Quilts, and they did NOT buy it. They couldn't afford it. Just goes to show - there are all kinds of people in this world, and while I was totally stricken at that time, I got over it - years ago!
But people --- unless you are PAYING for a commission, you have NO RIGHT to criticize someone else's work!!!
When I was sorting through some paper the other day, I also found this document. It was the WRITTEN conference catalog for Quilt Canada 2000. This was my first CQA conference, and it was a big deal to me. I went through that catalog like it was GOLD. Lots of good memories  - I haven't parted with this yet -- there is a bit of information I want to look at, and then it will go.

It was such a nice day that I decided to zip out for a walk - well, I do that every day regardless of the temperature. However, I went geocaching. The cache title was called Stuffed Pork - now, how could that relate to a walk in the woods?

I get it that this looks gross, but there is a pig in there!! A toy that was made very dirty, so it blends in perfectly. It was all the empty shells that caught my eye. 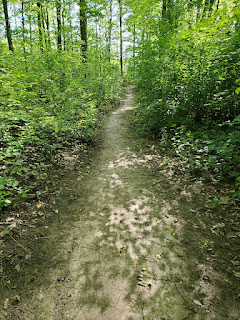 Leads to this major street in the city!!!! 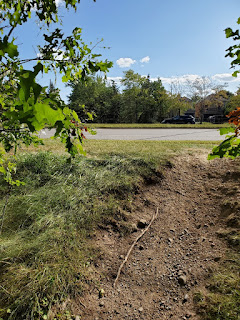 There are LOADS of little pockets of green space in this city. The trick is to get out there and look for them!!!

I got some quilting done, but this is all I can share with you at the moment. I'll share the quilt tomorrow. All I can say is that I emptied another spool of thread!

And Miss Lexi has her moments - she's not a slacker in the entertainment department. She has her issues as well. It was such a nice evening, and I remembered that I have a bunch of handwork things that I shoved into a cupboard in Studio U., so I grabbed the first thing I saw - a crocheted rug that is ALMOST done. There are two balls of "string". I used up the first one and need to join the second one. I'll do that today, so I can finish the rug this evening.

But I think someone was trying to tell me something. Like, "MOM - I love this, can I have it?"
"Mom, I REALLY love this - I NEED it."
"Ok, Lexi, you can have it."
I do have to repair the one that was in her kennel from before. And then she can have two!!! 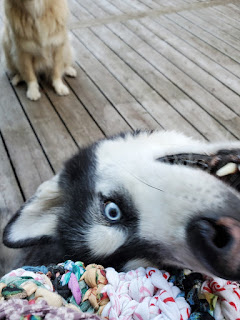 And as if that wasn't enough evidence that she wanted it, she got herself all twisted in the string when she and Murphy tried to play RIGHT BESIDE ME. There is an entire backyard to play in, but NO, we have to be as close to Mom as we can!!!!

Well, it's UFO Club today. I have to say that it's exciting to NOT be rushing this morning to get my commitment done. Yeah!!!!  That's my new goal -- try to get things done BEFORE they are actually due!

I also had a look at my Task Master list of UFOs from previous years. OH BOY -- it's time to get back on track with those. I am plugging away, so it's not like I'm not getting anything done. Turtle pace -- that's all that counts!!!

Even though it's going to be a nice day, I want to get some sewing done as well. Thank goodness, I'm not a gardener or have family commitments. I can literally do whatever I want all day, almost every day! Am I selfish? You bet - and I LOVE IT!!!!  There will be few regrets for me!