A night on the town

OK -- this is late. Nothing I can do about it and I also didn't go to spin class. That's what happens when you go out and don't get back until late. I was awake at the usual time, and then I said "are you kidding me?" and went back to sleep. I ignored my second alarm - that still wasn't enough sleep and so the blog is going to be late.

I sewed the last binding on. This was very fussy to do and I had to redo the join several times, before the binding actually fit properly. That's why it got left in the first place. And I did notice AFTER I had hand stitched the binding in place, there's one tiny spot where the binding isn't quite right, but I'm NOT fixing it. It's deep inside the long yoga bag. It's staying that way and NO ONE will know the difference.

And there's the hand stitching on the second end.
There's the yoga bag and it's done and I've marked it off the UFO list. I checked and this one is on the 2020 list. The full recap will come later this week. Oh yes -- this project is COMPLETELY done.
I have to laugh at my scrap bucket on the cutting table. It's getting a bit full and I have to make some bags to be used as pet mats. There's no time for that!
And this is why it takes me so long to finish a project. I put the next UFO project on the wall. It's a very srappy 60 degree triangle pattern. All the blocks are done, but when I put it on the wall, it loses a bit of its effect.
Hmm -- and I had nothing prepped to fill in the sides. Can you see that I've arranged the triangles into rows of hexagons, with a row of diamonds between? Nope -- neither can I. So that means, I have a bit more work to do. I really like the idea of the hexagons, but I want them to show. I could fill it in with a monochromatic fabric, or I could make more scrappy 60-degree triangles but in a different color? I like that idea and I think that's what I'm going to do.
You know what that means -- this one will NOT get done before the end of the year. But I'm going to pick another color -- I'm thinking yellow or blue. That would be very striking and then I can use the leftover green blocks to do something else -- I have something in mind and I seriously need to start tackling some of those scrap boxes. OR -- I could eliminate the diamonds and just offset the hexagons. I need to play.
Do you think it's a bad thing when your furniture is in exactly the same place it got moved to when the window installers were here? Normally, I wouldn't give it a thought, but the cleaning lady is coming again and GASP -- nothing got moved back in place. I've been too busy sewing. Hmmm -- I could move a couple of things just to make it look like I did something. No pictures got hung up, no blinds got put on the windows and knowing me, this place will probably still look the same in a month.
That's also why we still have contractor beige on the walls after living here for almost 20 years. It's NOT a priority in my life and you can see why I'm anxious to get rid of stuff. We don't need or want it and would likely not miss it!
On Monday afternoon, DH got asked if he wanted some tickets to the Raptors basketball game. Hmm -- he asked me to go with him. I'm not a big basketball fan, but these were season tickets in a good spot and I'd likely never get another chance so I said yes.
We decided at the last minute (we were in the car driving) whether we would take the train or drive. We voted for driving - not because we were afraid to take the train, it was all a matter of timing since we decided to eat there as well.
Yikes -- when they make these parking garages, those ceilings are LOW and there is NOT a lot of room to maneuver around the ramps.
I haven't been downtown in a long time and the number of condos would blow your mind! And the office buildings are all interconnected  - well that is nothing new. Here's one of the doors to the Scotiabank Arena. But NO -- that is NOT the entrance we would take. Nope -- we went around the corner to the club entrance, which are basically fancy restaurants and lounges where you can eat and drink and access the arena from them.
Let's just say that we almost didn't get in. Why? Because the Adobe app on my phone crashed and that is where my vaccine certificate is. ACK!!!!  It literally would not open. So I had to reboot my phone and then it worked. There were ZERO lines so it wasn't a big deal.
It's quite a labyrinth under the stands, but we eventually found the club that was associated with the tickets we had.
We decided to eat dinner down there and I will NOT tell you how much the meal was. Way overp-priced, but it was good. I think we went to the movies for the same price as my plate of chicken!!
But the tickets were in a good spot, almost center court, six rows back (not counting the rows on the floor). So it was all worth it.
And the first half was OK, but the second half was exciting and it was a close game. So many fouls! They ended up losing by 5 points.
There were NOT a lot of people and yes the players were mostly the secondary players -- I didn't recognize a single name, but then, it's not my game! But they were VERY serious about wearing masks. They had people with LARGE RED STOP SIGNS and they weren't afraid to talk to people about wearing their masks properly. No one got kicked out that I saw, but you got a warning and the second time, you got expelled! That's harsh, but necessary.
It was a bit of a hassle to get out that tiny parking lot, but we were home in less than one hour so that was OK.
As we drove past the CN Tower, I snapped this photo which was pretty cool.
And on our way through the maze of buildings, we passed by this giant light sculpture.  I LOVE the colors.

On the way out, I snapped this photo.  WOW  -- that's amazing and you could make a quilt out of those colors/patterns. Do you see the secondary patterns in there? 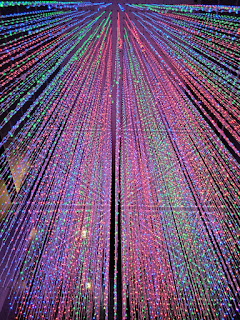 Well, that's a wrap for today. I'm not sure if I'll get to the sewing machine today. I need to get out and do some geocaching. I have until Monday to meet my monthly quota and I haven't started. So that's a priority. And perhaps I'll put some furniture back in place.
Have a super day!!!!
Ciao!!!