AH -- thanks to Maryke; I know that if you subscribe to my blog on the little widget on the top, that you'll get an e-mail each day without having to go to Bloglovin'. Thanks for letting me know that. It's always a challenge to know if something works the way it's supposed to when you are the owner/maker because you are logged into your account, and it works, but what happens if you're not logged in?

We had a fantastic show and tell in our machine embroidery club. WOW -- everyone is working on some super creative stuff, and I'll share that with you tomorrow. Then I spent the afternoon struggling to figure out the pattern for one of the sew-alongs.

It's one thing to breeze through the pattern and explain what is written; it's quite another (in this instance) to actually follow their instructions, so the block is the right size. This particular unit was a FAIL, and I didn't catch it. However, I think I got it all resolved, but not until I had marked up my pattern (which I never do) and sent out pages of notes to the group - only to realize this morning that I forgot to include a couple of pictures. I still need to finish the second part of that homework, and I'll get it done today.

Lesson learned -- it's one thing to be prepared, but I wasn't entirely as prepared as I should have been. GRRR  - totally my own fault.

ACK -- and someone sent me an e-mail asking if I had sent the homework, and then I panicked and sent it out partially completed, which I shouldn't have done.

The final copy will go out this afternoon with all my notes, but they got the homework assignment, which they should have gotten on Saturday in the class. Take a picture with your camera of the homework page!!! It's easy - the notes will follow as they can take hours to put together. Anyway --- I'm not going to worry bout it.

I hate that the pattern is NOT well written or presented, which irks me since we pay a LOT of money for those patterns, and they should be proofed and tested.

At one point, I'm riffling through my yellow scrap box to find fabrics to make the unit in question, and this is NOT working. So I grabbed a larger bin.

And I dumped the scraps into the larger bin to find what I wanted better. I need to sort through those scrap bins and separate them into the more solid fabrics I'm likely to use and the multi-colored ones to make string quilts.

And the cutting table looked like this. A huge mess of scraps, and I ended up recreating the unit in EQ8 to get the correct dimensions.

I was looking around Studio B yesterday, and oh my --- it's going to be time to replace some light bulbs! One bulb is completely gone in this bank, and one of the center two looks sick.

All three fixtures in the center bank look in good shape.

And there are two dead bulbs in the third bank of lights. There was NO time to replace them before, and there is still a lot of light, but I think the time is coming when I need to get busy. I hope I have four bulbs left in the box.

I had several items returned that people had sewed for me. My MIL is back sewing after her knee replacement, and here's one more quilt top.

And the binding is finally on this Quilts of Valor quilt, so I can get that to them later this week.

And Rose dropped off a bunch more placemats for Meals on Wheels.
Hmm -- out of their houses into mine, and I was really trying to get my "staging" area completely empty!! It's so close, and now I have more stuff to get rid of. I'll see what I can do to make that happen.

I looked at the desktop beside me and decided to grab a couple of things and start sorting now.

I got so far as removing the two containers that I'm going to start with, and then I got caught up in rewriting that pattern, so the containers are still sitting on the floor. Sigh...............

Technically, it's not decluttered since I did NOT deal with what I removed. Yet!

I know it won't be easy as many little things don't have homes, and to be honest, I must just suck it up and THROW those little things out! Or find a home or whatever, but NO MORE PROCRASTINATING with that stuff.

As I walked with the girls in the morning, we noticed that most of the wind damage from the day before was fences.

Some sections had collapsed entirely.

Some just leaned over, probably because there was something behind that fence. All that fencing is in pretty much the same area and is likely the same age. You can see in some spots where there have been repairs recently, so it's time to fix those rotted posts!!! 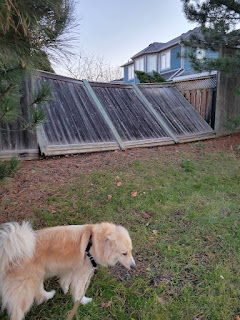 And we saw one tree that fell over and some debris in the forest, but nothing significant.

Then I noticed that some houses were missing shingles.

Thankfully, that wasn't a big issue in our neighborhood, BUT I had discovered in the morning that our roof was missing a couple of shingles. I'm now waiting for a roofing company to call me back to get it fixed. We also have a leak in the garage that I've been meaning to get repaired, so hopefully, they can do both simultaneously.

I see our decorative white fence is leaning, so I'll find a cord to attach it to my neighbor's fence as it will likely be dismantled sometime next year, so I'm not paying to have it fixed.

And here's the most significant damage of all.

Yes -- that is Murphy, and yes, she was likely digging under the gazebo. She thinks this is just great fun, but she's a total mess. There is ZERO point in giving her a bath because she'll just go and do it again. The mud dried and can then be swept up. For this reason and others, we have zero carpeting in our house!

So while my schedule is pretty wide open this week, it's going to be totally insane at our house all week. You'll see why tomorrow. But it means that I have some prep work to do this morning, so the girls will go for a walk a bit later today. Don't tell them -- they are NOT going to be happy.

And on that note, it's time to get moving!!!