ACK --- I feel like I'm missing out on something. The more I talk about the Bruce Trail, the more I hear stories of people who have hiked the trail or are currently hiking it. I need new friends -- ones that are hikers! And we need a support person to ferry us to and from sleeping accommodations each day!

I may never walk the entire thing, but I will walk part of it. The trail goes close to where I live, so YES -- I have walked part of it already. But a short section.

So this happened yesterday. I had gotten up early and was ready to sew, and I had a mission. I was a few seams away from finishing my bed runner, and I ran out of thread on the top, never mind the bobbin! I was sewing with the lid shut and knew that I was close to the end of the spool, but I didn't realize I was that close until BOOM - I ran out of thread. Luckily, I had a spare spool in the toolbox, and I was good to go.

Paula made a jelly roll rug while we were at the retreat. She made the rope on the second day and then decided to get the rug together yesterday. It looks fantastic, and it's pretty darn flat!
Laura got one-third of her Postcards from Sweden quilt done. Yep -- I really think that thing could be randomly sewn together. The only thing, and I'm not sure if I've ever noticed this on pictures of the original one, but there are squares created by the values. Again -- that would be easy to achieve by randomly putting it together. 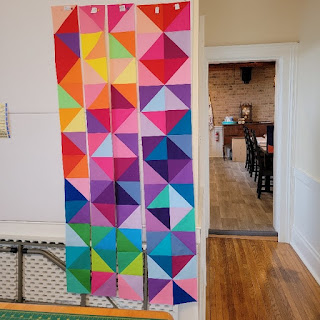 Now I'm intrigued to see the difference between the original and a randomly positioned setting. I should dig out the squares I cut to make this quilt and get it together! Maybe the next retreat.
Ronda was working on a Laura Heine collage quilt. She had some of the tracing done before the retreat but made excellent progress. It's a giant snowglobe, and there are bits around the edges to define it.
And here are three of the 24 kitchen towels that were made. They had a neat little handle that fits over the handle of the stove. Cute!  We got the link from Katheleen's sister on how to make them. I don't have the link handy, but I'll go back in my e-mails to find it.
And here's the gang of rowdy sewists just before we packed up to leave. It only took three tries to get a photo where I wasn't moving!
And here it is!!! By 9 AM, the top was together in one piece!! I was so excited that I went for a walk, which I don't usually do on the last day. A shorter walk of almost 6 K.
I binge-watched some baking shows and got some of the paper out when I got home. I've got about a quarter of the paper out.
I still had some time before going home, so I had a hand project to work on. This is Lexi's favorite mat that usually resides in her kennel. However, someone chewed one corner, and I had ripped out the last couple of rows and rejoined the strips of fabric. Now it's back together again. The only thing that remains is to secure the final stitch with the sewing machine, so it doesn't unravel.
I made strips of fabric and folded them, so the cut edges were inside - pretty similar to what happens with the jelly roll rug, but no batting inside. Then I crocheted the rug. It's VERY HEAVY!! And if Murphy so much as sniffs at it -- well, she's going to be in the dog house if she touches it!
Speaking of the girls, they were happy to see me. But since DH had left for the airport couple of hours before I arrived home, I suspect they were more excited that someone would let them into the backyard.
But they had to entertain me while I was ripping out the paper from my project. Murphy just looks like she's having a bad hair day!
And I swear, they are just crazy. I was lying on the couch to watch more of the baking show, and Lexi slept quietly in the big dog bed. Technically, we bought it for Murphy, and their quilt was hanging out of it, but Murphy wanted to sleep in the bed, so she ousted Lexi and climbed in herself, and Lexi had to sleep on the floor.
Technically, it's big enough for both of them, but that would never do.
So when I arrived home, I quickly emptied the car and took things upstairs or downstairs as needed. I didn't get everything unpacked, and I didn't touch any sewing last night or this morning. I didn't even go to spin class this morning. I was wiped from all the excitement of the weekend. I'm OK with that.
I did clean out my purse, though, which had become a dumping ground for a lot of crap. Now it's all clean again.

When we first started going to retreats, the number of sweets that came was obscene. After much "lecturing," the numbers decreased. Well, it's time to start nagging again. The number of sweets that came was obscene. I tried very hard to resist everything, although I did succumb to a few more pieces than I would eat if I were at home. But when you are only seven people and each person brings enough for 15 people, that's a lot of sweets. I didn't buy any sweets for the last meal, as there was already so much.
I'll be making a new rule. Bring enough for one meal -- one sweet per person (I know -- I'm mean!) and NO MORE. If people want more snacks, then bring your own! It's amazing how we use food as a comfort thing or a way to bring joy to others, or a feeling of sharing or comradery. But -- if you're not careful, those sweets quickly add up, and they are a killer to take off the waistline. I have no problem eating them, but MODERATION.
I know they had a quick exchange of sweets when everyone was packing up. I brought NOTHING home.
I now have a couple of pounds to get rid of because of it, and I walked every day!!! Anyway -- enough of that.
It's Monday sewing, and I have a ton of stuff to do - mostly tidying up and regrouping, but I hope to get some sewing done as well. And I need to look at the inbox at some point and the long arm.
I've only got five presentations this week - the last week for a while. One per day!
Have a super day!!!
Ciao!!!