In all the years I've been posting to this blog, I've never had an issue with writer's block. How could I when my life is crazy? And it sure helps to look on the bright side of everything. I have behind-the-scenes issues and concerns just like everyone else, but I choose to keep them behind the scenes and keep their impact on my life small.

I've so much to share today! First -- to catch up on those couple of photos I've been promising. Here's the first one - the keyboard situation.

Here's a picture of my keyboard. See how few letters are still visible on it? I have literally worn the markings off the keyboard! Notice that it's a curved keyboard and I must say that I was hesitant when I bought it, but I really like it. Someone mentioned that you can buy skins for keyboards, but I'm not sure if they offer one for this keyboard.
So do we rack this up to poor quality or overuse??

It could be a bit of both as I've never had this happen before. I must send a picture of this to Microsoft to see what they wish to do about it. Probably nothing, but they should make better sticking printing!
Here's the number of words that I've typed (or at least that Grammarly has checked) in the last five years or so. That's a lot of words. 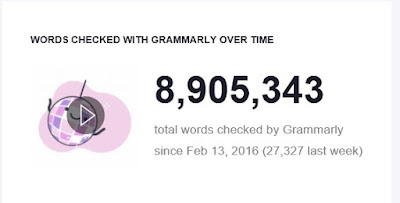 Thank goodness I'm a touch typist, or this keyboard would be totally useless to me. But then, I probably wouldn't have typed that many words either!!!
Here's the other picture I've been meaning to share. This is my take on the world and how we were raised. My Dad often quoted this to us kids.

I don't remember where it used to hang in the house I grew up in, and I DARE NOT ask my Mom, or she will want the darn thing. But I knew where it was hanging in the second house they lived in on the farm. And after they moved into their apartment, I took this - with my Dad's blessing. I remember that we were almost at the end of the long country driveway, and I made him go back so I could get this as I had forgotten it. It's the one thing that I treasure from the house. Weird how we focus on different items of value. Some would want the china or crystal, which have zero interest for me (and we didn't have anyway), but this trivet is precious to me, and it sits in my kitchen window, where I'm reminded every day of its value.
It had to be moved when the window got replaced, and it'll go back in its place soon enough.
The family room is somewhat back in order. I wiped most of the walls down and washed the floor to move the couch back in place. The couch got vacuumed -- that's a story for another day.
Two pictures on the wall will be given away, and I'm moving something "new" in to replace one of the pictures. DH is so stuck on keeping things the same and more on that later this week. Oh boy -- he isn't going to like it when I start throwing things away, but I whisk them to the car, and they are gone!
I made notes of EVERYTHING that needed to be done in that room. Plugs to be changed or removed, painting, lights, etc. It's a LONG list.
So I achieved a milestone yesterday. I do these Virtual Challenges, which is a bit of a misnomer because to say you completed the virtual challenge, you actually have to WALK the distances involved; the virtual part is where you walk.
Each year, the Conquerer website allows you to buy a yearly challenge, and this is my second year. You set a goal, and you have 365 days to complete it. I'm a bit obsessive and crazy, and I LOVE to push myself. My goal this year was to walk 4,200 KM. Guess what? I reached my goal yesterday. And if you want to do the math, it's slightly under 12 KM per day, every day, for 354 days. 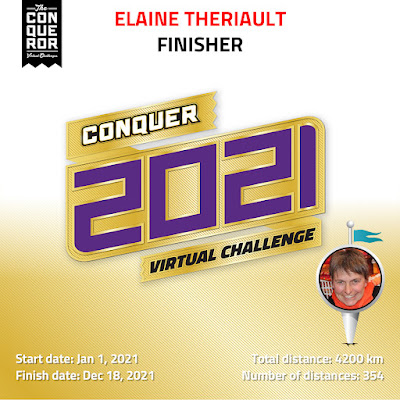 Who would have thought that possible? A couple of years ago, I would have thought you were crazy to even suggest such a thing was possible. I took my car everywhere - to the grocery store, to the Tim's that is 1 KM away, to the mall, to do ANYTHING. Now, I use the car for trips greater than 3 KM one way or when I need something too heavy to carry, which isn't very often. Since I'm an urban dweller and in an excellent location, almost all my errands can be done by walking.
Here's what my walk looked like yesterday.
Even though I was wearing a bright orange jacket and was walking in a crosswalk with the light, someone almost ran me down. This driver was stopped at the light and FOCUSING ONLY on the traffic coming from the left. They NEVER check right -- this is a HUGE issue. I was watching her as I knew she did not see me. And when she started, I YELLED. She looked like a deer in the headlights. And then I said a few bad words to her, I did NOT touch her car.
Then she dared to roll down her window and yell at me. I've no idea what she said - I think it was something like -- it was my fault TOO that she almost hit me. Dream on, lady -- she was totally at fault. But if I'm the one lying in a hospital bed with a broken leg, it doesn't matter who is at fault -- I'm the one that loses! I swear that EVERY driver needs to be made to walk in an urban area as part of their driving test so they can experience the dangers their car presents!
I ask all of you for a favor -- if you are in a car and turning right -- to be mindful of the traffic coming on the left, please look right before proceeding. It could be an adult with the sense to pull back or yell, but it could be a child who doesn't know how to react! Or a handicapped person or an older person. PLEASE look right before you start!
I continued on the work from the playdate, and I don't have time to share it again this morning. For sure I'll do it tomorrow.
I must say that with stirring up all the dust in my cleaning efforts, I struggled with terrible sinus issues for most of the day. I'm OK with dust, but that much dust? My sinus wasn't happy. And I get to do it again all week! Yeah!  Even an allergy pill didn't help a bit. I must remember to take it BEFORE I start my cleaning. And I decided against hiring someone to do that work. It'll be an excellent opportunity to clean and purge, and there is some satisfaction in that.
Maybe, I'll even take up cleaning the house! GASP -- I doubt that. But it does open your eyes to how friendly your house is to be cleaned. DH and I had a little discussion about his office as I washed that floor, my office, and the living room. At least half of each room. Then I get to move the furniture and do the other half.
So last night was our Virtual Retreat, and I managed to finish this block.
This is for my Enchanted Autumn quilt. I think there are 9 blocks to go, so I had some time before I needed to leave the call last night, and I got the red berries done on this block.

Be sure to pop into the Virtual Retreat today -- the link is at the bottom of the post. I'll be working on these blocks all day. I might as well just keep on stitching as I'd like to have the quilt top completed by the end of the year, which isn't far away. ACK!!!
This is Lexi when it's her turn for the walk. The poor thing -- she wants to go so bad when Murphy goes, but it's impossible to walk them together. OK -- so they both give me the sad face if they are the one left behind. But she won't budge from that spot --- you are NOT leaving without me. She sometimes gets super hysterical and tries to paw at the door, but then she doesn't go for a walk immediately. She quickly learned not to do that!
And should I need to make a pitstop between each dog, she whines at the door the entire time. That's worse than a child needing you when you are in the bathroom!!!
And then there's Murphy, who watches out the window the entire time that I'm on the walk with Lexi. She dare not miss a thing!
The day was so pretty yesterday with all the snow, and Lexi is doing what Huskies do best - enjoying the snow. She could have come in if she wanted, but she was happy as a clam out there in the snow.

Oh -- these girls are the silliest, to say the least.
Tomorrow, you'll get the story of the playdate and everything we learned.
I still owe a few confirmation e-mails to people for various classes, and I'm not touching that today. I'll be back at "work" on Monday and will try to get everything completed by Tuesday evening.
Here's the link for the Virtual Retreat today. Remember it starts at NOON EST today as we have our UFO club first thing this morning. The holiday falls on a weekend, which messed up the schedule a bit.
Join Zoom Meeting https://us02web.zoom.us/j/87246635892?pwd=VGY1cUUyLzRaRi9VUVV2ZWFINXc2dz09 Meeting ID: 872 4663 5892 Passcode: 440473
And on that note, it's time to get the day rolling.
Have a wonderful day!!!
Ciao!!!!