I`ve been meaning to write about this quilt for a while - today`s the day.  If you went to Quilt Canada, you would have seen this quilt. It`s called Crackin`the Code by Tannis Fahlman.  I spoke to Tannis in person and she has allowed me to discuss her quilt on my blog.

What type of quilt comes to mind when you look at this quilt?  Is it traditional? Is it modern?  There was a lot of discussion about this quilt. The quilt was entered into the Traditional Wall and Bed Quilts and it won FIRST PLACE. 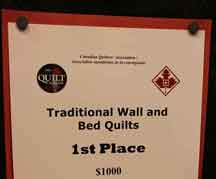 I must confess that I was a bit dismayed when I first saw that this quilt had been awarded the first place ribbon for Traditional Wall and Bed Quilts.  I was concerned of the message that was being sent to the quilting world. Is the traditional quilt on the way out? I know there were a few comments about how few quilts were hand quilted.  Let's face reality folks - not many people are hand quilting. If we want this industry to move forward, we have to accept that machine quilting HAS taken over - years ago.  If people still hand quilted their quilts, nothing would get finished.

The blocks were rotated in a "random" pattern until the quilt deesign was pleasing to her eye. Then she sewed it together.

The other thing about this quilt is there are TWELVE borders. Yes TWELVE.  That is also very traditional (to have borders) and very NOT modern.


The quilting would also qualify as non-traditional, but seriously - with machine quilting - what is tradtitional and what is not?


I wish they could have put a sign on the quilt to tell people why this quilt was traditional, not modern because it has a very modern feel to it.  I think the colours also add to the modern look, yet the way it is assembled (30 blocks and 12 borders), is very traditional.  Maybe that is what they call Traditional Modern quilts. If you look on Google Images for Traditional Modern, you get traditional blocks in modern coloring.

There is a category at QuiltCon called Modern Traditionalism – Quilt design incorporates the use of an identifiable traditional block pattern and modernizes it by applying design elements such as alternate grid work, asymmetry, color, scale, etc.

So technically Tannis' quilt wouldn't fit that category because her block is NOT traditional.  Interesting.......

Anyway, I thought you would be interested in that story.  I think this quilt is pivotal and we're going to see more modern traditional quilts in this category in the future.

PS - just a quick note about the judging process for Canadian Quilter's Association (and Quilt Canada). All THREE certified judges have gone through a very rigorous training session over the course of several years. The certification is taken very seriously. All the quilts entered go through a very strigent jury process as well and the quilt maker is contacted if the jury feels the quilt is in the incorrect category. Tannis said she was contacted by the jury and she gave them her rationale (outlined above) why she wanted the quilt to remain in the traditional category.

There is no right or wrong to this debate.  It just goes to show that quilting is constantly evolving and it becomes harder and harder to categorize some of the quilts. I think that is a good thing - it's means we, as quilters, are growing and pushing the envelope.