Thinking out of the box


It was a day for thinking outside the box. In case you don't know, there's a big event this week at Black Creek Pioneer Village.  It's called Quilts at the Creek.  I want to say this is the fifth or sixth? year for the event. There are a series of workshops in the days prior to the main event on the weekend, which is an outdoor quilt show.

Don't forget that there are several trunk shows on the weekend and I'll be doing a walking tour and talking about the challenge quilts.  Yes - it's going to be hot, wear a hat (I look hideous in hats!), slather on the sunscreen and bring a bottle (or two) of water. I promise we'll stand in the shade!   My walking tour is at 2:30 on both Saturday and Sunday.  It's going to be loads of fun!

I went to the workshop last year with Amy Garro on free motion quilting. Did I take a sewing machine?  Nope.  That was intentional. I have a very hard time adjusting in class.  Maybe there's too much pressure on myself to "perform" in front of a lot of people I know? Maybe the pressure is from them?  Or most likely, I'm just too lazy to prep for the class.

This year, the instructor is Kathy Doughty from Australia. 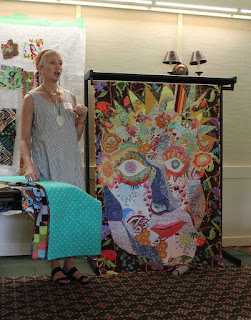 I was introduced to her work by Nancy several years ago. I do believe Nancy took a class from her somewhere.  Ah Nancy - is that quilt finished?  Not quite!   She owns a shop in Australia (Material Obsession) and has written five books.  A very wonderful lady. I thoroughly enjoyed her class and I think there is still room in Sunday's class on wedges!!!  I really should have taken that class, but I was too lazy to change and I had already committed to do the walk about tour.

Anyway - the class yesterday was called Out of Line. It's essentially a free form landscape type class.


I was enthusiastic when I signed up but as the date got closer, I just didn't have the same excitement to prep. I decided to go anyway (and listen and observe) and I took a binding to hand stitch down.  Am I an idiot?  Not really - I'm a great observer and I learned a TON by watching what the other students did and what they didn't do.  Was it fair to the others?   the teacher?   Maybe not, but I didn't take any time away from the instructor or the students and I offered up some advice from time to time and helped out a lady that was having tension issues on her sewing machine.

What I found very interesting was that despite the fact that everyone saw the picture above BEFORE the class and got a list of the type of fabrics to bring, that almost 100% of the class brought monochromatic colors. Greens for the grass, blues for the sky, etc.  Only ONE person really went to town and brought the type of fabrics that Kathy was suggesting. And who would that be???   None other than NANCY!!!!


Don't get me wrong, many people had a wide variety of fabrics and from what I saw, their pieces were looking awesome.  Just a tad more realistic than was the intention of the class. But we're all our own artists, so what we create is PERFECT every time. And Kathy basically said that!

I could see that many people were struggling with the concept as they brought photos that they were emotionally attached to.  A beautiful holiday photo from England, or Greece or their cottage.  Many were very detailed and people were struggling to let the fabric do the work of the texture rather than account for each realistic detail.  That's what I wasn't prepared for and I wasn't in the frame of mind to let loose.  In other words, don't go down to the nitty gritty detail - use stripes for roofs, etc.

One lady who sat close to me, had a shot of three boys on a water feature. Lots of cubes, lots of angles. Very hard to figure out. Just before lunch, she starts up the sewing machine. And what I saw at the end of the day was spectacular.  She tossed making it realistic out the window and then she was racing through the piecing.  I didn't see the finished piece, but I think it'll be spectacular. Very abstract and she should be very proud of what she did.  I think a number of the others got going with the more abstract approach as well.

Did I learn something?  Yes - I learned the type of photo to look for, I learned the fabrics to look for, I learned her technique.   Now the big thing will be to put it into practice.  Oh yes - you see there is a hitch to all this.  When I went to say good-bye and thank you to Kathy, she asked me if I was coming to Market (I had told her where I worked).  YES - AH - then you can bring your quilt to show me as she will also be at Market!   OH MY!!!!   Well - I guess I had better get that photo out and start cutting!!   The finished projects don't have to be big so that is great and I do like the technique.

Here is another one of her quilts that follows this same style.

I love going to workshops and seeing what sewing machines people bring. Some only have one machine and that's what comes to class.  Some have smaller machines.  There were two friends and this is the sewing machine that they each had.  It was the cutest little thing!

I found someone's blog that talks about this little machine. It's very cute!!!!


The class went until four, but I managed to finish my hand stitching, despite the fact that I yakked to many people in the class - hey - quilting is a small world!   It's the veggie quilt - I'll take a picture of it tomorrow. Just needs a label and it's ready to go!   I decided to leave around 3 - might as well - I was just going to goof the next hour off.

I had seen something in the class that belonged to someone - OK it belonged to Nancy - that darn Nancy!  And I was going to buy it on my way home.  Ooops - got on the highway and there's no exit to that place.  Oh well, it's close to work, I'll go today. Then I decided to stop at Chapter's to see if they had Kathy's latest book - NOPE - and no new magazines. It was not in the cards for me to buy anything yesterday!


So got home earlier than usual and worked on that quilt repair.  I was going to show you my progress today, but I've already babbled on enough.  All the pictuers are edited - you'll see them tomorrow.