So I would never be able to run a marathon - running just isn't in my genes or in my head. But I could ride my bicycle all day and be happy. But when you're in the long haul for something, like having to ride 100 miles in a day, you need milestones to get you there. You start to pay attention to the mile markers on the roadside. You watch the mileage signs as you approach the next town, you play games in your head, and so on.

Sometimes, it can seem that the miles go on forever! However, when you get close to your destination, well, things seem to move a bit faster, even though you're not pedaling any faster!

That's what's happening with my Long Time Gone project. The end is close, and if I would have kept up with the blocks each month, I could be done! However, I am a wee bit behind, but CLOSE.

Before I share that with you, I have to tell you about the Virtual Retreat. If you did NOT get a chance to stop in, you missed the BEST retreat ever. The conversations were flying all day, and it was extremely entertaining. We talked about everything and anything. We solved the world's problems, and it was so much fun.

I have to say that I sat there in the afternoon, torn about what to do. I had only walked 6 KM so far in the day, and that's not nearly enough to feed the number side of my brain (I have a daily goal of 11.5 KM) each day. But there was so much interesting stuff going on in the retreat that I didn't want to miss anything. I bailed on the retreat and went for a walk! I did feel better, but it was nippy outside. I didn't even check how much I walked - I just needed more than 6 KM. OK - just checked - I walked 10.7 KM - close enough to my daily goal.

We have people from all over Ontario, Alberta, and New York! Thanks to everyone who signed in - it was a fabulous day, and I had loads of fun, and I did get a lot of sewing done! We were scheduled to shut down at 8 PM, but everyone was still on a roll. However, by 9 PM, I was done. I passed the job of the host to Carol, and I left. I don't even remember how many people were still on the call and who knows how late they went!

So a HUGE thanks to everyone for the best retreat ever! And you know what that means? It's only going to get better next time! The dates are Saturday, May 22 from 6 PM - 9 PM (or whatever!), and Sunday, May 23 from 10 AM - 8 PM (or whatever!). Between all of us, we have an amazing pool of talent and information!

And now onto what I accomplished.

I managed to get four more of the pineapple blocks done. Those darn things take a bit of time to assemble than you think they will, and I did have to rip a seam here and there as I wasn't paying total attention to what I was sewing! It doesn't matter - that's four more done and makes a total of 9. There are 7 left to sew, and all of them are partially completed.

After the blocks were done, I decided to sew Section 6 together. All the pieces got put on the design wall, and I started to add the sashing. I didn't quite get this section completed last night before I had to throw in the towel., but I finished it bright and early this morning when those party-goers are probably still in bed!!! And it was such a relief when things EXACTLY matched.

That leaves TWO sections left to go. I can see why some of the class just couldn't wait. When you're this close, you want to get it all together. This is the mess of blocks for the last two sections.

After putting Section Five on the design wall, this is what's left for Section Four. Oh yes -- I CAN do this and get it done by our June class. Who knew that I could do that?
Here's my Section Five on the design wall. YES -- there are a few gaps. I still need to make four more pineapple blocks. That's on the list of things to do today at Monday sewing. And that large churn dash block is also missing. It's been cut out for months, and I ignored it. So that's the job for this week - get Section Five together. Well, one of the jobs as I have other things that need to be worked on.
And while I put Section Six together, I got a couple more Snail's Trails blocks together. That makes a total of 35. Only 13 left!! Yahoo!!!!!  See how those milestones are getting reached, and I'm a counter - I love to count down the number of blocks or sections that need to be done. I can't help it - it's the analytic side of my brain that kicks in! 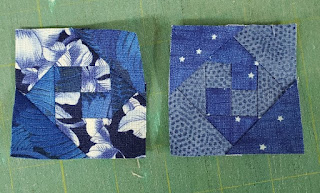 Speaking of snails - look at these little guys that I saw in the garden yesterday morning. Oh shoot -- I saw some snails in the front garden, but when I took the picture, I really didn't take a picture. And it's too cold for them today. I'll get one before I finish those blocks.
And here's my mini design board. It's all coming together, and I might just get all these blocks done by Sunday when we have our next class. Then it'll be time to work on the next set of blocks.
Here's my mess of strips that I'm using for the pineapple blocks. I'll be happy to put this away.
I worked on one other project yesterday. So you remember my Winter Wonderland quilt. It's upside down in the picture, but that's OK.
I didn't like the heaviness of the two blocks in the bottom left. (actually, top right). So I decided to switch them up.
Oh great - not until it had been approved by Murphy. I swear - a quilt on the floor - that's an open invitation.
And this is what it looks like now.
It's still a bit heavy in the bottom corner, and that darn small block almost needs to be redone. Not happening! That's the way it stays.
The cutting table is not in too bad shape, but didn't I say that it would take all week to get this cleaned up? Oh yes --- lots to do and nothing urgent, so I'm in good shape all week.
So what's this in the forest? Why that's Miss Lexi shedding! She stopped to sniff - OK - she stops every two feet to sniff, and I started to pluck her - just like a chicken. She loves to be outside - she slept outside last night - right out in the open (not under the little shed), and the temperature dropped to zero! Silly girl!!!
So houses going up for sale on our street are rare. And when one goes up - it's a big deal. On April 20, I saw a COMING SOON sign on the house several doors down. April 21, the staging truck was in the driveway. April 23 (Friday), the house went live on the listing. And by Sunday afternoon (April 25), the SOLD sign was on the house. When it sells that quickly, you know that they must have gotten an amazing offer since I think they were withholding offers - which means there was a deadline.

That's totally insane! I've heard stories of houses going for more than $650,000 OVER the asking price. Like that's insane. My first house was $42,000 (that was years ago!) It's a totally crazy market, and I bet the neighbors are going to be laughing all the way to the bank since they are original owners and have lived there for over twenty years!!
Well, that's it for today. WOW --- It's Monday sewing, and that means four more hours of sewing with my peeps. I LOVE YOU all, and the Zoom calls are great fun. There is NOWHERE or NO other way to have a variety of people attend. I love it!!!!
OH -- what should we clean today? How about your ruler collection? Jane?? How many rulers do you have that you didn't remember having? And will you use them all? If not - perhaps a ruler exchange would be in order.
Have a super day!!!!
Ciao!!!!