My walk in the woods

Another brain fart yesterday! Ronda was chatting about a recent Netflix show she watched on the US's justice (or lack thereof) system. Oh yes --- I know the story -- I just read the book. Then I proceeded to mix up TWO stories that I had recently read! Good grief! At least I remembered both stories! Oh well - we all have days like that. It doesn't change the fact that there are horrific stories about injustice and not just in one geographic location and not just against one cultural group. It's quite sad that someone's position or political view takes precedence over justice! Whatever happened to innocent until proven guilty?

In case you want to read or watch the documentaries, the first is about Steven Avery, who is still alive and in jail. The Netflix documentary is called "Making a Murderer," and the book is called, Illusion of Justice by Jerome F. Buting. The other story is about Ron Williamson, who was exonerated and died five years after being released from prison. The book is called The Innocent Man by John Grisham (his first non-fiction), and there's a Netflix documentary by the same name.

Now that I've written it down, I might be able to remember that. I also read them very close together, so that didn't help matters!

Well, off to do something a bit different yesterday. I went for a HIKE - a real hike in the woods, not the gentle forest behind the house. I think for most of it, we were on the Bruce Trail. You would know those white markers on the trees anywhere - well, I would - I've hiked parts of the trail in other areas near my house. It was a glorious morning - the sun was out, the temperature was just right - the perfect day to get out. And I'm happy to report that my boots worked like a charm. I do find them a bit clunky compared to running shoes, but they didn't hurt!

The moss was out in full force and was everywhere! The colors were gorgeous!!
We passed by two beautiful waterfalls. It's crazy because the rock beneath the waterfall looks very porous, and I swear the water was coming through holes in the rock rather than over the rock (on one of the edges - not the entire waterfall!)
Here's the second one. We got out early, so there weren't many people, but as the morning wore on, it became a bit more populated. Not that we couldn't keep our social distance, but you had to be careful!
Of course, I saw lots of cool things to take pictures of. I love the pattern on the inside of this tree!!!
But soon, it was time to get home and get back to work. However, there's just one problem - the weather. It was too nice to be inside, yet I have a deadline. So I took the indoors - outdoors! I grabbed one of my plastic folding tables (Not my favorite for sewing, but it works for an afternoon). I grabbed a smaller sewing machine than I normally work on, something to sit on. I had the computer out there to watch The Quilt Show (addicted!!) and, of course, my project. I didn't need an iron for what I was sewing.
Of course, the entertainment had to come along! She just HAS to be close! She's so needy, but she's cute, so she can get away with it!
And she is fascinated by water! I caught her looking in the pond - at her reflection? Not sure, but I missed that picture, but this was cute!!!
She must have been having a moment yesterday. I was having a veggie snack while sewing, and the two of them were waiting for a little nibble. Miss Lexi just bustled her way to the front of the line, and Murphy allowed it. HUH???? What just happened here? Murphy - patient? The world is ending!
I'm happy to report that I made good progress on the deadline quilt. The blocks are all together and trimmed. Doesn't this scrap box look amazing? I've started to sew the blocks together. Hey - it's raining today, and I'm not sad at all! It means I will get the top done this morning and get it quilted this afternoon. I'll put the binding on during Monday sewing and walk it to the Post Office in the afternoon!!
I managed to get two more Snail's Trail blocks done. I would be so bored to sew just these, but I would do it if I needed to. These are my enders and leaders, and I suspect that after getting the quilt top together, that there'll be a few more of these!
Here are my boards - still a few more to sew together, but progress, and that is all I ask - let's make progress!!! 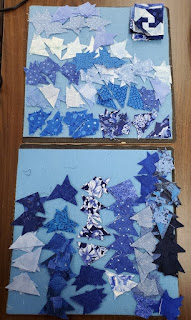 It'll be a less exciting day today, but that's OK - I've got Ricky and Alex to keep me entertained, and when I need a break, I'm sure I'll find a podcast or two to break it up!  I do love watching the videos on my laptop. When I need to go somewhere else, I grab the laptop and take it with me. Not the most productive, but so far - it hasn't really slowed me down!
It's my last day of my mini-vacation, and while the sewing retreat would have been more fun, it's been great to have some time with no deadlines!! Well - you know what I mean - daily deadlines!
Here's something to think about in the organizing world. What the heck are you going to do with all your movies? VHS or DVD???  Do you still have a working VHS??? Well --- think about it - what are you going to do with them?
On that note, I'm out of here!!!
Have a great day!!!
Ciao!!!

Email ThisBlogThis!Share to TwitterShare to FacebookShare to Pinterest
Labels: All in a Row, Backyard, hiking, Lexi, Murphy