Here's the update on the UPS saga. 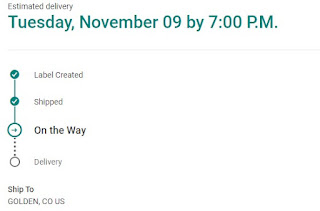 Yeah!!!!!  I'll still be on alert until the thing actually arrives, but I have seen that it's left the initial depot! Now here's the thing -- can you tell me why this issue was resolved quickly, and last time, it took weeks? There was no reason for that massive delay the last time. Why drives me crazy is when I can't get an explanation for what happened. I can easily understand if they said a truck blew up or there was a fire or whatever. But to have no valid answer why someone kept dropping the ball? My brain doesn't like that!

It's the same thing when I'm told to do something. Tell me what to do, tell me why I need to do that task. And if there is a valid reason why that task needs to be done that way, then I'm good. But if you say we need to do it a certain way because that is the way we've always done it! OH -- never tell me that.

That was an issue with guilds and myself. I heard over and over again -- we've always done it that way. OK -- I get that, but let's try something different. The resistance that I met time and again was enough to drive me to drink. Well - I didn't actually start to drink, but I was very frustrated!

That is why, when I'm teaching that I try to never tell people that there's only one way to do something. I give them my rationale for doing that task a certain way, and they can adopt that method or modify it to work for them. I've heard of teachers and attended some classes, where if you didn't do things the EXACT way the teacher wanted, there was hell to pay. There was an instance where a student hadn't put her binding on correctly, and the teacher proceeded to rip it off in front of the entire class. Which was highly unprofessional of the teacher and very degrading (unfortunately) for the student! Seriously???

I don't think that person is teaching any longer. Thank goodness for that! How many students have been traumatized!

I spent a lot of time with the serger yesterday, and I have a bunch of photos to upload into my presentation, and then I'll be ready for the first part of my serger series, which starts today!

Do you need a serger?

That's like asking your husband - does he need a table saw, a chop saw, and a scroll saw for woodworking. There are probably workarounds, but having the right tool for the job makes life so much easier!!!

I currently have three sergers in the house! I love them all! But seriously - do you need one? It really depends on what you are sewing, but I wouldn't be without one. I've had one for years, and I use it for way more than garment sewing!

There's another serger series starting on November 10 and if you want to get signed up for that class, let me know, and I'll let you know the store. It's all on Zoom.

I was on driving duty to get my MIL to physio yesterday. Hmm -- I'd already been for my walk, and I had some time to kill. There are geocaches in that6area -- let's go for it. I had to drive; otherwise, I wouldn't have had time.

I have to laugh because I had to zip into the bush to get one, and ZAP - I was like a magnet to these burrs. They just grabbed my legs in CLUMPS. At least I didn't get wet, and I could easily pull the burrs off my pants. If Murphy had been there - well, that would have been a mess.

But both caches were easy to find, and I like easy!!!

I noticed in the photo above that I got one of the couch cushions in the shot. There were three cushions, so I suspect that they were moved there by people. But amazing how these little hidden spots exist around the city, and no one is really aware of them. You never know what you're going to find in some of these spots.
It's not that you would happen upon this unless you walked into the bush, but people tend to NOT see these little bushy areas!
The second one was close enough by that I could walk to it. It was much smaller, but the container was BRIGHT RED, so that one was easy to find.
So I've started collecting my points for this month. I need to get 5,895 points. If I only found regular caches, I would need to find 17 more. I'll try to do a combination of traditional and other, and I won't leave it all until the last weekend!

I want to do a couple more earth caches in the city. Although the one where I need to wade across the Credit River? I think I'll leave that one - it might be a tad cold. I had to stick my hand into the pond last week (before it was closed up) to remove pine needles from the pump. My hand was NOT in the water for long, and it was numb from the cold!

I belong to a small group that messes with mixed media stuff. I'm not good at drabbling in that area, although I'd love to spend more time doing that. We had a super inspirational meeting yesterday, and I have some assignments to do! They won't take long, but I wish I had more time to really play. We don't meet until December when things will have quieted down, so I should be good to play for a couple of hours to develop some very cool projects.

Yep -- that's the one thing that people do NOT spend enough time doing. Just OPEN playtime with crafts and sewing and quilting or anything! Try new techniques, threads, fabric, or whatever. I don't get a lot of time to do that with the crafts, but I seem to spend hours each week trying something different. Why would I "waste" my time playing with fabric? Because that's how I learn. I learn by making mistakes, by seeing how different combinations, changing up the original, and I may not like how it's supposed to be done -- I might like the way it looks after I play with it.

We also get a ton of happy mistakes! What will our current generation do when they are NOT allowed to have a lot of free time to play. They are scheduled into so many activities that they don't have time to let their brains learn to be creative!!! I hope things will be different because of the lockdown!

Some people are so paralyzed that they can't start or finish a project. Too afraid of making mistakes. Holy --- I would love to change that. Perhaps I need a workshop where I "force" people to do something out of their comfort zone? Yes - if only there was more time! I'm so glad that's not me, but it used to be me! I needed everything to be perfect, and then somewhere along the line, I lost that feeling, and now I throw caution to the wind! Thankfully!!!

Here's your little assignment of the day -- try something new! Maybe you change the direction of your daily walk. Go left first instead of right - most of us walk in a loop. If you eat the same thing for lunch every day (guilty!!!), try something new. If you're buying fabric and always buy the same style/type -- try doing a project (small) with materials out of your comfort zone! Try a new decorative stitch on your sewing machine! Just do something DIFFERENT today. That will help keep your brain on alert, which is good as we age!

Well, it's going to be another crazy day with THREE presentations. Two in French and one in English. And I have to switch a machine out for each one! Thankfully all the software and my phone are already in French, so I don't have to do that! That's all part of the job!