So before I knew that my schedule was going to get super crazy this month, I had booked a couple of days off. It's time to get back to the real world of sewing in person, and that's what we did. We were v16 yesterday, and today we are 15 or something like that.

Where did we disappear to? K&A Quilt Studio in Ingersoll has a giant classroom, and that's where we are! It was loads of fun, and I don't think I managed to get a whole lot done. But there's a reason for that - wait for it!

I've seen most of the people on Zoom over the last couple of years, or I've seen them in some of the clubs, but it's nice to have a one-on-one with some of them rather than talking to the entire group!!

But I swear that I can't leave the house without lots of stuff! I only had one bag of stuff to work on - well, besides my clothes and my portable office. Mind you, a good part of the stuff was to bring to others. I brought quilts that I had quilted for one person, things I was "donating" to others, and a sewing machine that I lent to someone to try out. I'm taking that back home with me.

And with all the chatter that went on yesterday, it took me a while to get started. I'm prepping some raw-edge applique for my UFO this month. I didn't quite get one block done because I'm missing some fabrics for parts of it. I never even thought to check that, but I'm not going to worry about it. This large block is mainly done, and I can quickly finish that up at home. I'm now working on the second block. I don't have all the fabric for that one either, but I'll prep what I can. Every little step is a step in the right direction.

Can you believe that I didn't even take a picture? I was - well, I don't know what I was thinking. I was so excited to be out that my brain wasn't working correctly.

But because of all the bookings that occurred in November and a logistical issue, I had a presentation yesterday. Trust me, I double and triple-checked that the correct presentation was on the computer and a backup on a USB. But with the advantage of Zoom, I zipped to the hotel, logged into the internet, and Zoomed.

It worked like a charm, and I'm glad to know that the internet issue I was having at my house had nothing to do with my laptop. Hopefully, it's all working OK when I get home.
And one has to be resourceful. I do not have a mousepad at home, and I need one. However, I grabbed this issue of Food and Drink from the LCBO, and it worked like a charm! I didn't have my room, yet so I borrowed from a friend. Hmm -- I sit right beside a shelf of magazines - I might have to pull one out and use it. The table just doesn't cut it. That darn mouse can be very temperamental at times!
I was going to eat my lunch while I waited for the call to start. I had brought a salad. Only to realize that I did NOT have my utensils. I swear I brought them, but maybe they got left in the car? Nope -- it turns out I left them at the store! Sigh........
This hotel is a mess right now! Well, part of it is under construction. There are nine of us staying here, and when I went to get my luggage from one of the other rooms, I took the stairs. And walked right through this.
So that doesn't look so bad.
But how about this?? They are gutting the rooms and redoing them. And yes - it is needed. Our room is clean but tired.
And down one of the halls, there's drywall all over the place. And I guess they didn't expect anyone to take the stairs! Yep -- it's a total mess. 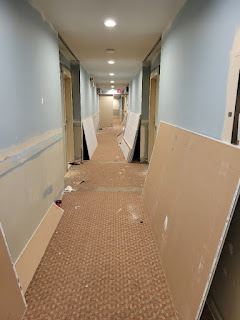 Obviously, one should be wearing protective gear - I was not! But I did at least have my running shoes on! 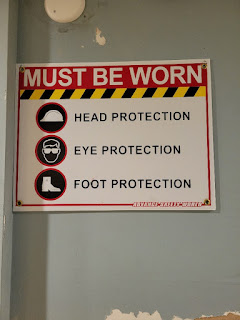 Our little group of four is making good time walking across Canada. We are at 49%, which means we are ahead of the game and should be at 50% two weeks ahead of my planned schedule. Not that I shared that plan with the others, it was just a number in my head.
As I've mentioned before, I LOVE checking out the map. It's one of the best parts of the whole thing, and we get exercise at the same time. I'm glad the walk is virtual because it's minus 12 in this area, and they have snow and ice. Yikes!!! It's only 4 this morning here, but it's dry!
But what I don't understand about the maps is that tiny blip on the map called Baljennie. That is the SMALL village near where I grew up. It used to be a railroad stop, but the trains stopped running years ago, and it's basically deserted and has been for years. Yet, it still shows up on Google maps. Wow!!!! 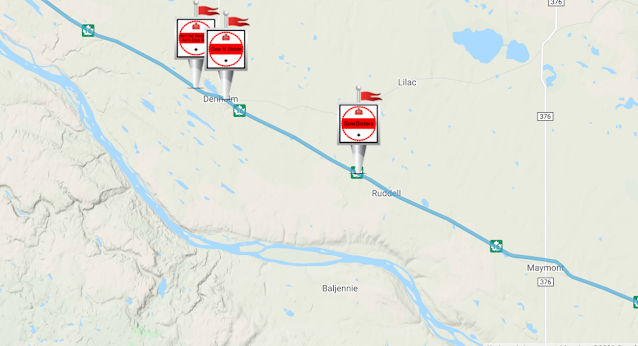 I'm going to get my day started soon. It's still dark outside, but I want to try a couple of geocaches in the area. It will begin to get light soon, so I must get packed up and in the car. Although I need my walk, so there are a couple that I can walk to, and if I don't find them - well, I'm OK with that. I'll get them at home.

OH -- I should mention that the project that I brought to work on is a HUGE one. It's all raw edge applique, and if I had kept up every month like I was supposed to  - it wouldn't be a UFO. But I didn't, and so it's a UFO. But I've really made significant progress thanks to the UFO club.

And I know you're asking if I bought anything at the store. I had two pieces of fabric that I was looking for, and I found the same material for one of them, so I bought two meters of that. It's for my barn quilt. The second one was to finish off Urbanologie, and I found something a bit better suited than what I found at home, so I bought 1.5 meters of that. And I found a roll of Cut-A-Way Light stabilizer that I was hoping they would have. And no pictures of that either. Good grief -- where was my head yesterday?

That was it! Only three things, and I needed them all. I may buy a "treat" today? I'm not sure. There's so much to be tempted by, and we found the most adorable quilt that was done as a block of the month a whole back, and I'm tempted, but I certainly do NOT need it. And I won't buy a kit -- I have so much to choose from at home!

The cuteness is by The Quilting Company, and the quilt we saw was the Camp Sugar Bear.

Well, that's it for today. I'm off to pack up and geocache. Find something to eat and then off to the store to hopefully get a LOT more done today than I did yesterday.