I love Liz's comment from yesterday's post about changing up the route you walk! I have to confess that I mostly keep Murphy to the same walk. And that is done intentionally. If we change up the course, she gets even more excited than she already is, and well - I suspect that some of my knee and low back issues are a result of walking that very excitable dog! I have to keep TWO hands on the leash - not always, but at times, especially when passing a squirrel convention, which happens daily!

Lexi, on the other hand, gets to choose which walk she wants that day. Do we go left or right from the driveway? And then sometimes, we change up the direction that we walk in the forest - she can easily handle change. Murphy? Not so much!

To practice what I preach, I took a slightly different route for my afternoon walk. Still walked the same distance, just on other streets.

I hope everyone had a chance to try a different route in the car or on their walk or just do something different! The same old - gets boring pretty quickly.

Well, that's not true - we all have our days when we struggle to keep up! Yesterday was a tough day. By the afternoon, with one more to go, I needed a nap! I had two presentations in French and one (a new series) on sergers. So I had to "work" for all three in preparing mentally and physically.

There are Youtube videos and websites, but I also love to have a physical book in my hand, and one day, I'm going to be so bright that my brain won't handle all the information! Let's just say that I've learned tons and still learning! My extensive library is definitely helping out with all the research that I need to do.

Here's the new serger that just came out - it's the Husqvarna Viking Amber Air S600. A five-thread machine that is a dream to work with.

Let's just say that you start to look at all your clothing in a whole new way. What kind of seam did they use to sew that garment together? Yep -- it's crazy.

And here's my little waste box. I've been playing with the tension, and it's so easy! GASP!! Easy tension on a serger? Yep -- there are a few little tricks that I've been telling people in those serger series. It's like anything; once you learn and understand, nothing is complicated!! So even if you're not in the market for a new serger, you will probably learn something in this serger series, and you might even get inspired to be serging!

There is a new series on the sergers, which starts November 10 - if you're interested, let me know, and I'll let you know which store is hosting it. It's all on Zoom.
I know you are probably tired of hearing about my package, but I'm so excited that the issue got resolved quickly compared to last time. I noticed this morning that the expected delivery is now Monday!!  Yeah!!!! I know it will get there, but I'm still leery. 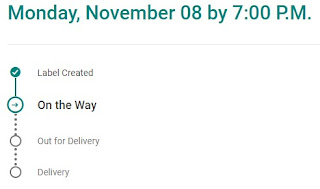 And it's always crazy to actually track all the places that a package goes through on its journey. Here's where my box has been once it entered the US.
I love getting mail, which is why I'm going to do a Christmas card blitz again this year! If you're on my list, you'll get a card. If you're not and would like a card, e-mail me to provide your mailing address.
Well, things are coming and going around here. Even though I have one presentation today - in English and all about quilting -- easy, I have a couple of fun things on the agenda, and you'll have to wait to see what those are! I'm super excited! One of the things is to pick up an order that I recently placed for batting, and there might be some surprises with the batting -- like the patterns for classes next year!!! The other is an outdoor activity, and I haven't even checked the weather. Rain or shine -- I'm going ahead!  Just checked -- sunny and cool! Perfect!
Sometime this weekend, I have another package to pick up, but I need to make arrangements for that to happen first. Then there's a package coming today with long arm upgrades. Yeah!!! Another box is being shipped next week with more fabric for the next project. That one is super exciting - there will be loads of stuff to learn for that project, but HIGH visibility, and that's all I'm going to say!!! December is set aside to work on that!
I received my Trendtex challenge fabric kit yesterday!!! Oh my -- I love the colors!!!  The theme is REFRESH, so I need to get my brain working on that.
Speaking of challenges, I know that some people struggle to get inspiration. Where do I get my inspiration? It can happen in the weirdest of spots. I was huffing and puffing in spin class the other day. Joseph usually plays videos for us to watch - extreme sports or bloopers or Olympic moments - stuff like that. Anyway, sometimes, I can focus on the screen to pass the time; in other moments, I'm focusing on my breathing to stay alive on the bike! Just kidding - it's never quite that bad.
Anyway -- all that to say, as I was on the bike, I had a brilliant thought about the Cherrywood challenge. And see - just like that, I've got an idea. Where did the inspiration come from? My brain, the visual stimulation in the room, and a bit of sweat! I need to start mulling that over, but I think it'll work for the challenge.
The same thing will happen with Refresh. Now that I have that theme and the fabrics in hand, my subconscious will kick in. Sometimes, it's good to start with a Google search, learn the actual definition of the theme, and then think of ways to interpret that theme.
One more piece of mail -- we got our medal for The Big Canada Run. Although our group is at 46% -- GO TEAM GO!!!, they send out all the medals and other stuff. We also got a buff. These will be awesome at this time of the year. You want a little something at your neck, but it's not cold enough for a scarf!!!

I have to say that I'm pretty proud of our little group of four on The Big Canada Run. We are now at 46% and will hit the Alberta/Saskatchewan border in the next day or so. I had planned on completing 10% (1,000 KM) per month to finish at the end of April. At our rate, we are going to finish sooner. Not sure how much sooner, but it doesn't matter. We will have walked the entire 10,0000 K by the end of April at the latest. Go, TEAM GO!!!  We are 82 out of 239, so that's not bad for four experienced ladies, none of which is a runner!
I did get an e-mail out this morning and some other writing. But I still owe a couple of e-mails to people, so you are not forgotten -- I'm just running a bit behind to get things done! I have the entire weekend "free," but there are quilts to quilt, e-mails to write, homework to prep, as well as presentations to get up to snuff, so it will be busy, but no set times! I like that!
Hopefully, you did something a different way yesterday. If not, then you better do that today! I'll think about taking Murphy on a slightly different route, although she gets a variety of paths - on the streets and in the forest, so each day - it's the same but varied. For her - meeting someone new is enough to throw her in a frenzied state! And she knows where the best squirrel conventions are held as she goes on HIGH alert when we enter those areas!
Well, on that note, I'd better get myself organized as there are things to get done!
Have a super day!!!!
Ciao!!!