OK -- I promise that tomorrow, I'll get started on all the homework photos. I have things to share with you from the Virtual Retreat.

What fun we had! We got to meet Barb from Maryland!  Lots of familiar faces that stretched across the country and over to Germany. We discovered MANY things, including there's an imposter amongst us! That's all I'm going to say about it, except that we had a good laugh over it.

We talked about everything and anything, including the FitBit and what it tracks and do they do anything with the data. Sheepherding dogs, quilting, tornados, and how to save the world! You had to be there! Because of the widespread heat (at least in our part of the world), it was a perfect day to be inside and sew.

The next Virtual Retreat is scheduled for July 24 and 25, so be sure to mark that on your calendar.

I'm happy to report that I didn't need the seam ripper, but that doesn't mean I didn't make mistakes. And the mistake happened for a reason! Well, besides the fact that I was yakking and NOT paying attention to what I was supposed to do.

One of the tasks on The Task Master list for the week was finishing off these arrow blocks for the Urbanologie quilt. We need to make five of them.

I had already made an error when trimming the units for the point, so they are not as pointy as they are supposed to be. I decided that I could live with that, so I sewed the points together.

Then I was making the feathers for the ends of the arrows. I sewed the squares on one set of components, trimmed and pressed them. Then I was onto the second set. NOOOOOOOOOOOOO!!!!!!

A miscut!! OK -- so this calls for drastic measures. I've decided to redo the darn components for the ends of the arrows. It shouldn't be that big of a deal. I was avoiding doing that because I have limited fabric resources to finish the quilt. I think these mistakes call for cutting all the focus pieces for the rest of the blocks and see how much I have left or not. Then I found a shop that carries a lot of Tula Pink, not sure if they have Elizabeth or not, and if not, I have a friend who has some of the Elizabeth. I'll make this quilt happen!! As someone pointed out, probably ANY Tula Pink fabric can be substituted. And she's right! Get over it!

After that little fiasco, I decided that I needed to work on simple things, so I got the shaft part of the arrow done. That was easy - two straight seams!

The backing for the redwork quilt (Winter Wonderland) is now done, and this quilt got moved to the "to be quilted" pile.

Then onto the next simple thing - the borders on the Kimberbell, Hello Sunshine. I do LIKE that yellow/green border fabric. So that top is done - well, not quite. I'll explain in a minute. OH - and because the cutting table is pretty clear, it was easy as pie to cut and pin those borders on.
I went through my stash of backing fabrics and found something that was appropriate. It might not have been a perfect choice, but there was JUST enough fabric on this bolt, and now that bolt is gone off the shelf. That was perfect enough in my mind.
These flowers are for the All in a Row quilt. I'm making two different quilts from the rows. The instructions said to cut the background for those flowers' outer and inner parts, but that looks silly. So I cut brown squares, and this new version looks a whole lot better. I managed to get ONE flower done, and all the leaves are done. So that was good.
Wait -- I'm not done! It was a very productive retreat. I finished the applique on the owls. This is also a row for the All in a Row quilt. Yeah!!! All the stabilizer is off the back, and I LOVE the owls. They are adorable.
As I shut things down last night, this is how the cutting table looked. It doesn't look like I got anything done, but this is "new" stuff.
But the sewing table and the ironing board are in good shape!!!
But I tidied up a bunch of stuff on the cutting table this morning, and this is all that's left. These are the items that are going on The Task Master list for this week. I know it doesn't look like I'm making progress, but I am. I am closer to finishing all the prepped stuff, and none of these tasks will take that long. Each one could easily be finished in a day. The largest thing is putting a border on a quilt, making a binding, and the backing. That's easily done in a couple of hours. That might be a good task for Monday sewing this morning.
There's still some prepped stuff, and this will take a while, but I'm using it mostly as enders and leaders.
So back to the Kimberbell quilt. Once the quilt is quilted, there are some embellishments to be added. This is the project box that was filled with tools and supplies for the Hello Sunshine quilt. No wonder I couldn't find my chenille brush in the box of chenille supplies. It's now put away.
Finishing the embellishments is on the list of things to do this week. I have some embroidery to do and some other fiddly stuff. But good grief -- why didn't I finish it before??

No worries - it's getting done now, and that's all that counts.
And once all this stuff is done, there's still plenty waiting on the current projects table to keep me busy for the rest of the year. Isn't that crazy? All that stuff, and it's going to take at least ONE year to clear it all. And there's plenty more where this came from. Now I must admit that a few things did get added to the lists, and they were NOT on this table, but they got finished and put away. That's important. I AM going to make this happen!

Thanks to the support team at The Virtual Mission, I changed my route through Eastern Canada. I'm still walking through Nova Scotia, and it only added 20 extra KM to the total. I'm now going to take the bridge to get to PEI and the ferry off the other side. I won't get to Halifax, but I'm OK with that.

Don't forget to join the Facebook Live event tomorrow for the Spectrum Quilt A Long. There are PRIZES!!!!!   You can check out the rest of the details in yesterday's post. But here's the time and the date. 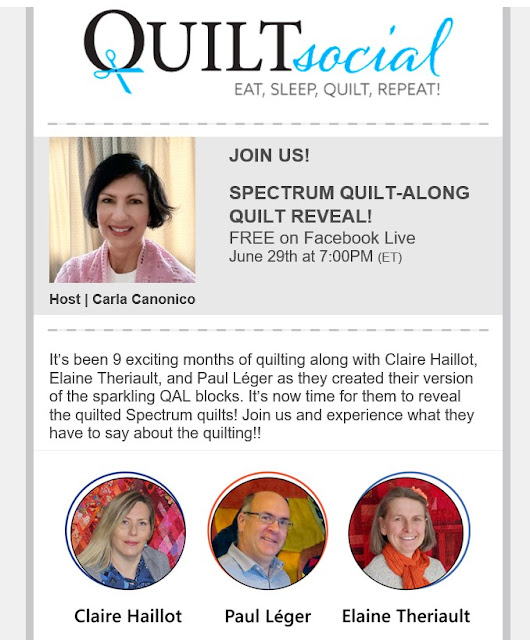 And that's it for today!!!!  It's Monday sewing, and I'm going to tackle some of those projects on The Task Master for this week.