I'm sure we've all had those days when you just want to crawl under the covers and hope that tomorrow will be better. That was pretty much my day yesterday. HOWEVER, all good things came from it, so it was worth the issues.

I started the day with at least a good hour on the phone with VISA. It would appear that some fraudulent charges (from ONLY one source) were appearing on my card. I had tried the day before to "cancel" this account, but there was ZERO information on the website or the phone associated with the charges to make that happen. The day before, VISA had said the only way to stop the charges was to cancel the card if I couldn't get the company to stop charging me. I wasn't ready to do that. But after a good night's sleep, I realized I had no choice.

So, not only was I on the phone, but I had to go back through the statements to find out who I need to contact to let them know the card number is changing. Well, I'll wait until I get the new card, but when it comes - I'm ready! It's actually not quite as bad as I thought it would be. There are 14 ongoing charges on my card - some are annual, and some are monthly. I thought it was way more than that.

And there are one or two of those that I might even cancel, but now I've got a handle on it! And thankfully, VISA is going to reimburse a good part, but not all of these charges. So a GOOD lesson learned, and I'm sure that most of you are on top of this. But one MUST check the statements regularly. Actually, we do, but DH thought the charge was mine, and I thought it was his. I guess that lesson is - we better communicate a bit better on stuff like that. No more assuming!!! Anyway - we got off lucky. So if you don't check your bank statements, you should make it a habit - once a week to check them.

OK -- so that was in the morning. Then I needed to do some paperwork that was LONG overdue and required some searching, and I'm happy to report that all that went very well. So at least one thing had no glitches.

Then back to that darn navigation system in the car. The day before, it had been working, and then it stopped partway through the day. Why? I was determined to figure this out. I kept getting this error message.

Well --- the darn app is ON my phone. But I kept getting the same message. OK -- then I sat down to think about this. OH, the app won't open on my phone, so that's why the car can't read it. Then I had to remember how to delete an app on the phone. I know it's easy, but I couldn't remember, but I figured it out. Then I reinstalled the app, and now it opens on the phone.
Out to the car, where I very quickly managed to get the thing connected.

OK, that was relatively easy once I realized what needed to be done and no high blood pressure occurred to fix the issue. Now I know of another troubleshooting thing to do when this doesn't work. All of my previously entered data was gone, but I'm OK with that.

Well, what else can I tackle? I have had an issue with one version of my embroidery software on my laptop. It stopped working a couple of months ago, and I need to get that working. It's rather inconvenient when I have to unplug the desktop and take it downstairs to do a class.

I started by calling Microsoft. Well, it wasn't a call; it was the online chat - do you know how hard it is to get in touch with them? I really wanted to talk to someone, but that's OK. So I was on the call with them for a LONG time. While they tried, yet again, to delete the bad file, I had nothing to do. I grabbed a bucket of paper crap from the desk and started sorting.

Yes -- I know that most of you would look at the pile I grabbed and say - "that's OLD school papers - just toss the entire thing!"

OK -- I CANNOT do that. I MUST go through each piece of paper. I'm methodical, and that's just the way I am. I rescue the paper that can be recycled for the printer, and I often find a wee treasure or two.

These papers were from M's school days - gosh - I think she was in Grade 6 or something. YES - for some reason, they never got tossed. WAIT -- You laugh!!! My Mom, I know, has all our old school papers! Well, most of them. OK - some of them.

I glanced at a couple of the things and have NO CLUE what they were talking about!! And look what I found!!! A quilt block!!!  This was something related to algebra that meant nothing to me. 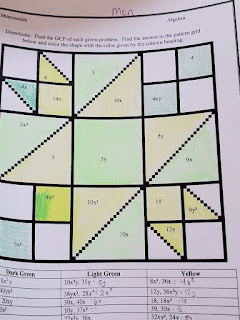 I managed to get through the stack of papers, and now I have a bunch of stuff that I need to finish sorting through. It's mostly junk, but I need to go through it. Don't try to dissuade me - it won't work. This is how I roll, and it's probably why this stuff is still sitting here after so many years. BUT - progress is being made, and that's all we care about.

OH - back to the call. She wasn't able to fix the problem. She ended the share screen session. Then sent me a curt message to contact the support of the embroidery software and literally ended the call. No pleasantries. And then had the gall to send me the survey if I was happy. I THINK NOT!!!!  I was very ticked.

I contacted the embroidery software people as I had the first time I tried to fix this issue to see if they were experiencing issues with this one rogue file. Nope, but he suggested that I do a factory reset. ACK!!!! I didn't want to, but last night, I got brave and checked out how to do it. I moved all my data to the shared drive and hit RESET.

It took a long time to make that happen, and I was asked questions along the way - well, as it started to set it up for me.

And then I got a totally wiped clean laptop with NOTHING on it - except Windows.

I've managed to reload my Microsoft Office. I still have a couple of programs to load, and then I will have to deal with the data that got moved to the shared drive. I rather like having EVERYTHING on that shared drive. Then if I need a file, it's there regardless of what device I'm on. I'll have to continue with that today.

Let's not forget the password thing. Thankfully, the passwords are written down - how the heck else would you ever remember them all! I didn't have one issue with a password - well, one slight issue when logging into the router, but I managed to resolve that one pretty quickly.

Needless to say, all that took a HUGE mental toll on me. I'm getting better with technology, but it drives me crazy. I did not get to the long arm as I had an errand to do. It was a long drive and took several hours. But all the machines are swapped out, and I now have a new one to play with. And there were stormy skies all around and lots of rain. It was a wild day.

So while it was a frustrating day, it was also a productive day, and I hope that everything will work later today. I MUST get to the long arm today.

Here's the troublemaker! Murphy got a new ball from Hobo Kitty the other day. I gave it to her yesterday. She sat outside and merrily chewed it. Ah - that Murphy!!! She's so darn cute, and she knows it!!!

Let's hope that today is a better day. There's more writing and sewing and quilting to be done, and depending on the weather, I might get out for a bike ride. I walked 345 KM last month, which is about my average. I know I struggled on some days to get the regular daily mileage, mostly because of my schedule. This month is looking good - not nearly as much stuff on the calendar! Oh - and nothing got taken off of The Task Master yesterday. That means I don't think I can add anything this coming week. I NEED to get all that stuff done before I add more. He's MEAN!!! A super boss, though, with a gentle reminder to not take on too much until the current stuff is complete. I hate LOGICAL minds like that!

You do know that The Task Master is literally a list! But I'm determined to treat it as more than a list. It's a commitment to myself to get stuff cleared up, especially the crappy little jobs that tend to get set aside day after day. And so far - that list has kept me on track. I just put a bit too much on it. I need to break some of those larger tasks down into smaller ones, which are more likely to get done. I'll be doing that for this coming week.