OK -- so the timing of the road trip was NOT the best. I have a lot of work to do, and I didn't get back until later in the afternoon. However, that day was the only day that worked for Dede, and we were going for her sake, plus we had a sweet ride - I was in!

Dede had to pick up some fabric and a book all the way in Seaforth, so we headed out early in the morning. I waved HI to Shelly as we zipped through her neighborhood.

Let's just say that it's fun to drive with the top down until you're in farm country and the farmer is out fertilizing the field! Thankfully, we were faster than he was, and that didn't last long, but that odor returned from time to time. Hey -- it's farm country - what do you expect.

I didn't get a lot of pictures because I was driving. I know - lucky me! And let's just say that car GPSs are just weird. But between the car GPS and our phones, we didn't get lost, although we ended up on a gravel road at one time.

Since we were headed out that way, we decided to stop at K&A Quilt Studio in Ingersol. OH MY  -- they moved to a new location in January, and it's right off the highway. It's HUGH, and the classroom?  Oh yes -- I could take a class there - it's huge, and the tables are AMAZING. I want those tables. Yep - they are IKEA. They also have loads of Kimberbell stuff if you're into that, including the fabrics. Yes -- I wanted one of everything since Kimberbell stuff is just cute!

I did pick up a few things, but I also left a LOT for the next person! If you're in that neighborhood, it's definitely worth the trip. 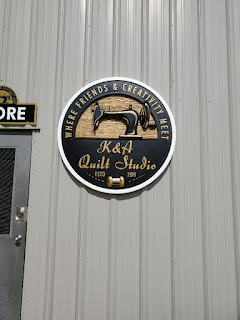 There's loads of room to move around. The only thing - both owners were away on well-deserved breaks. But wouldn't it be fun to have a sew day there? The classroom is on the ground level,  hmmm -- perhaps we could have a two-day retreat, but we have to go home at night? They have a lot of property - I could take my tent! I wonder.........

I know they do have open studio days - OK -- let's ask. Who wants to drive to Ingersoll??

Then we zipped off to Seaforth to visit with Trina at Cotton Harvest Quilt Shop. Amazing how many small communities have their downtown ripped up. I guess it isn't quite downtown, but we had to take a detour. I've never been to this shop before, although I've seen them at quilt shows, and of course, they have hosted the Cherrywood Challenge three times. She remembered me! Yikes --- that's scary as I haven't seen her in a couple of years.

It's a super shop if you want wool, Sue Spargo stuff, and Cherrywood Fabrics. Tons of wool kits and primitive style quilts, hand embroidery, etc. There was one lady in the store when we arrived, and she was like a kid in a candy store! I'm not sure if she had ever been there before, but she was awestruck.

Time for a quick bite - it was getting late in the day by this time, and we needed to be heading home as I did have a bit of work that needed to be done.

The car just happened to drive past E&E Cloth & Creations in Newton. They have loads of fabrics and excellent prices.

Yes - I brought a few things home, but I didn't go too crazy. Almost everything I purchased has a reason. Only one thing I bought that I didn't really need. I'll take a picture for tomorrow. I couldn't resist.

So back home where I had a quick bite to eat, and then I hit the computer. I got everything organized for a couple of the presentations. I'm not done, but I'm as done as I'm going to be. It'll be OK - we're not talking rocket science here. I once taught an entire quilt top and never made one block, so I'm sure I can make this happen. BUT -- I won't let this time management issue happen again. I'll start on the August homework NOW.

After the classes this morning, it's going to be heads-down this afternoon to get that writing finished and off my plate. I'll be trimming quilts during the Virtual Retreat tonight. But that's OK. Then I need to regroup so I can figure out how to get caught up!

Here's something to contemplate today.  I'm looking at my Tula Pink quilt, and I'm in a quandary. 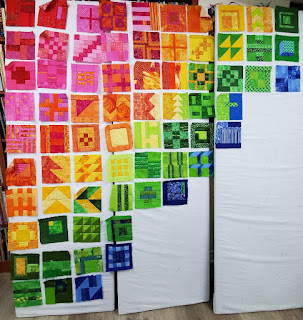 Something is missing. I wasn't sure what to do about it, but now that I see the picture, I think I know what needs to be done. I'll give you a day to contemplate it. Leave me a comment if you see what needs to be changed. Here's a hint -- it does NOT involve switching blocks, so don't suggest that I move A to B, etc.

Here are the Zoom links for the Virtual Retreat. It's TONIGHT and tomorrow. Be sure to stop by and say hello. You don't have to stay and sew - just say HI! Now that things are opening up, it'll be interesting to see if the numbers go up or down. Me -- I'm ready to sew anytime!

Also, let me know if you would be interested in having a sewing retreat at K&A. I haven't even asked them yet, but I don't think it would be a problem. I'm not sure how many could fit in the room and keep social distancing, but it's huge. And maybe a couple of other people could sew in the hallway, which is also huge! I'm thinking two days in August, and we could have a catered lunch. And see - just like that - I'm organizing another event.

But here's the thing -- I was planning on going away in August for a couple of weeks. I've decided NOT to go. Instead, I'm planning day trips to various places, and this would be a perfect two-day outing. I'm thinking of a couple of days in August.

Text me, e-mail, and I'll work out details with the owners IF it's even possible.