Out of sight - out of mind

Wow!!!!   We had so much fun at the Virtual Retreat, and we got to meet someone new. Hello to Kathy from Winnipeg. A lot of the usual suspects were present, and so great to chat with everyone! It's canning season, and I'll leave my friends to make their jam and jellies and other preserves. It doesn't make sense for me to make them since I don't eat them. I was tempted the other day when I saw homemade jams for sale, but then, I don't eat bread (or very little) so that the jam would still be here next year!

And good grief -- those retreaters -- they stay late. I signed off both nights well before the rest of them did. Hey -- I get up at ridiculous o'clock, and I need sleep. Thank goodness, Zoom doesn't need me to be there!

I attempted to sew some of that double wedding ring quilt, but I started off with a mistake, so I didn't continue. I'll deal with that this week.

I'm happy to report that the major writing is DONE. And two of the five homework write-ups are done. The rest of the homework is sewn - I just need to write, which will be my focus for Friday. I'm off for a couple of days. Here's the thing - we need a vacation because of the stress of getting ready to leave for a vacation.

I have run around the last couple of days like crazy, prepping classes, writing, sewing, etc. Because I will be away and it has to be done before I go. Now, why is that? Then you run around like crazy to get things caught up when you get home. Vacations are stressful!

But I have no plans to be away for any length of time for quite a while after this, so as long as I get my time management skills in order, I should be fine!

I'm participating in the barn trail quilt along with Thimbles and Things. The original blocks are 18," but I didn't want blocks that large, so I reduced all of my blocks to 9" finished. Not that great of a challenge, and I have a particular color scheme going on.

Each month, we have a challenge, and I'm usually sliding my pictures in at the last minute. Well - that's not going to happen this month!

My block was cut out, and I had attempted to sew it last week, but I was struggling with one of the components - it just wasn't the correct size. So I thought it would be a good time to do that yesterday while the others were entertaining me.

I had checked my measurements, and well, it still didn't work when I went to sew it together. So I verbalized my issue and well - guess what? It was at that moment that I knew what I was doing wrong.

So look at the square in a square  (medium grey, with two white triangles and two red triangles). For whatever reason, I was trying to make that as a snowball block, NOT as a square in a square. No wonder the darn thing didn't get bigger! I've no idea why I did that, but I did. Some days, your brain just goes in one direction when it should be going in the other.

Since I was on a roll, I made a smaller block as well. The challenge this month was to make the block in a 9-inch size. Since my blocks are already 9", that wasn't a challenge, so I made a 6-inch block, and they both look awesome. I didn't get a chance to lay out all the blocks this month. Maybe next week.

I've got space on my design walls to hang three quilts. One is not that easily accessible at the moment because of the film stuff. One is consumed by the Tula Pink blocks, and the other has Bonnie and Camille. I could move the table situated in the film area since I'm not going to be doing Zoom classes until September, so I could have another quilt in progress on the wall.

But it does feel nice to be done way ahead of the deadline. Now, if I could just keep that in mind going forward!

Speaking of the Tula Pink blocks, I did move the blocks around, and here is where I'm at. I don't want to get too scientific about the entire thing, but I think this is how I will leave it. There are ten open spots, and we make 10 blocks each month, so I should get those made and fill in the gaps for the next class.

I think it'll look better this way, and there won't be so much space to fill with purple in the bottom corner.

While I was sewing yesterday, I had company. She often comes downstairs to keep me company, but she hears me talking, and I guess, wonders who I am talking to. She is a licker and loves to lick my feet. But at some point, I think she felt I wasn't sewing fast enough and wanted to help.

And yes-- she was putting enough pressure on the foot pedal that the machine was actually sewing. What a silly girl!

I brought everything up last night, so I could easily load it in the car this morning. I think she knows something is going on. At one point, I woke up to find her staring me in the face. Yes! That means she was on the bed. She is not allowed on the bed, except for a quick cuddle from time to time. Maybe I was snoring, and she wanted me to stop?

I found a great place to put my paperwork. On my chair! And then I can sit on it and make it disappear! It's easy! 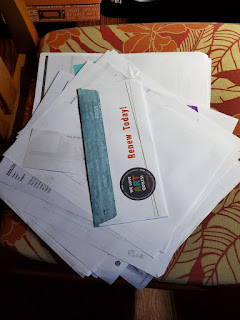 I did get a few pieces out of the way, and I'll be focusing on the rest next week. I have to get some of this dealt with, as I need to start prepping the next round of homework, and I've got other stuff that has to be done. Customer quilts are almost done for this month (a wee bit behind), and then I hope to focus on the community project quilts in August. I need to get a few of them quilted because Diane is still sewing, and I got two new tops from her last week.
It's going to be OK. I'm much more relaxed this morning than I have been for a while because everything got done. Well, a wee bit more to do, but the urgent deadline stuff is done.
Oh my -- I also forgot -- check out the blog on QUILTsocial this morning. I'm talking about sewing machine tension on the new Husqvarna Viking Designer Ruby 90. It's a good lesson for EVERYONE.
I should be able to blog from where we're going. It's not that far away, but not the best internet, so I'll be hot-spotting from my phone. My tech advisor will not be with us, but I think I know how to make that happen!
Have a super day!!!!
Ciao!!!