One by one, the stuff that needed to get done is getting completed! All the quilts are trimmed and ready for pickup. The classes are done, although I still have to do the follow-up for them. I'll get to that this week and I have two small quilts to quilt later today or at least load one. The last major writing assignment is almost edited, and that will be done for a while as well. Phew -- and they thought it couldn't be done!

Yep -- I've got to start right into the class homework assignments for August. There's no time to waste!

I had to laugh yesterday as the studio has become a bit overrun with stuff! The drawers of machine embroidery supplies were hanging open, the ironing board was covered with stuff, the floor was littered with more supplies (OK -- so that was a tripping hazard), there's stuff at the bottom of the stairs to be brought up, and the cutting table - well, I just can't seem to clear that one half of the cutting table.

Oh my - doesn't that look like the retreat basket? Sh!!!!!!!!!!!!!  Don't tell anyone, but I'm popping out for a few days this coming week.
It looks a lot better this morning as during the Virtual Retreat last night, I did a wee bit of tidying. I'll be doing a bit more today.
As a result of the tidying, I put one of the fabrics I had purchased on the road trip away. This is going in the box with the other Tula Pink for the Urbanologie class. It's a BIT limey compared to the rest, so I'll have to see if it is actually going to work, but it's at least not hanging around on the floor. 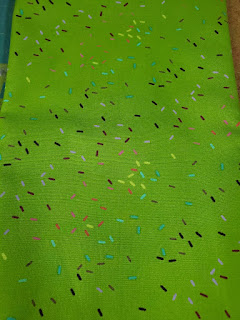 I have more to share with you later, so wait for it!

So - did you contemplate my dilemma with the Tula Pink blocks? Do you know what's wrong? Heather guessed last night, so here it is. There are NOT enough yellow blocks. I have solid red, pink, orange, green, and blue. And yes - I do have some blocks that are only yellow, but very few. I go from orange/yellow to yellow/green with no solid yellow between, So the next set of blocks that I make will be specifically colored to fill in the spots. I'll have to move these blocks around once more to see how many yellows are missing. Then it should be a piece of cake to finish it off.

Yellow can be a tough color to work with. It can overpower, but in this case, it's underwhelmed. I might move the blocks around today during the retreat. Then I can stare at it and make sure I'm good with my colors before sewing the sashing in place. And I should be looking for sashing fabric. I know I'm going to use black, but do I have enough? Shoot - I should have checked that before my road trip last week!

I'm sure that all of you have this next issue in your neighborhood. Speeding and running stop signs. We live near several schools, and I swear the drivers seem to speed up rather than slow down. Recently, the speed limit dropped in the area by 10 KM per hour.

The speed limit in the school zone is now 30 KM.

It'll be interesting to see what happens when school starts in the fall to see if drivers respect that limit. I have to say that 30 KM is slow, and I find myself still doing the 40 that it used to be.

There are signs that there are increased fines in these zones.

But that doesn't help.

And then there's this intersection. I swear, people just totally ignore this STOP sign.

There are times when I wait to cross that street as you just don't know if someone will stop or not. I've seen people blow through it at 50 KM or more. And when I let them know that they missed the STOP (I'm very expressive with my arms), I've had people blow me off. They just wave and keep on driving. Seriously??? Someone is going to get seriously hurt or killed one day.

And one of my neighbors is bad. She gets in her car, doesn't check the sidewalks, and just backs out of her driveway and speeds off. I'm sure she's making a run to Tim's since it's about the same time every day. I'm tempted to leave a note on her car one night.

I would love to sit at that intersection with a radar gun and a camera and get license plates. I'm sure in one day, there would be many and there's not much traffic at the moment.

However, imagine my delight when I saw this sign yesterday morning.

YEAH!!!!   A speed camera!!! That should more than make up for lost revenue from COVID for the city. I don't know when it's coming, but I bet it's in place for when school starts. That's the 30 KM zone, so it's going to catch a LOT of people. I'll have to be mindful as well; as I mentioned, I'm still not used to the slower speed.

So be warned - should you be coming to my house, be very mindful of the speed limit!

I just don't get it - why are people in such a hurry that they need to speed? I know I go on and on about it so much that DH is cautious in the car. He's almost to the point of being overly cautious because he knows I'll yell at him! Well, I don't yell at him, but I tell him all the stories of the crazies. I swear that EVERYONE needs to walk around their neighborhood to appreciate what it's like to be on a  bicycle or as a pedestrian. We get in our cars and have no idea the challenges that pedestrians and cyclists face.

My new philosophy - well, one that I've lived with for a long time is TRUST NO ONE. Don't trust the cyclists, the pedestrians, or the drivers. They are NOT predictable. So you must be on your toes 100% of the time. No phones, even if it's sitting in a holder and hands-free - it just takes a second, and you've run over someone! Without myself being alert, I would have been hit several times by cars.

And don't get me started on the cyclists who insist on riding on the sideway. I want to give them a shove every time they pass. I get it if it's little kids, but adults? and teens? Get on the darn road where you belong. And we have loads of bike paths and dedicated lanes around here. Stop riding on the sidewalks. I used to move to the grass, but no more - I'm going to be larger than life and take up my share of the sidewalk and force them onto the grass!

Don't forget that it's Virtual Retreat all day!! It's great fun, and hey, Paul was pitting cherries last night. So even if you're not sewing, you can still join in. It's all about sharing stories and entertainment!! And it's FREE!!!!!   And if you want to go on vacation, chances are one of us has been there and can give you some tips.

Have a super day and stop by and say HI.

Email ThisBlogThis!Share to TwitterShare to FacebookShare to Pinterest
Labels: neighbourhood, Studio B