I'm preparing my blog posts for QUILTsocial. Some super exciting news happening there - wait a few weeks and you'll see what I mean. I'm very stoked about this one.

Anyway, it has involved a lot of prep work and my studio has basically been pulled apart. I can't even take a picture - there is too much stuff everywhere! You see I needed some examples and I thought rather than just make random examples, I would actually make a wee bit of progress on several projects.

A bit of panic as I looked for something that I've been saving for a while, just for this purpose. OK - found that one under the long arm. Those blocks are now complete (well over the part that had to be done to them before I finish piecing them - took all of about 15 minutes). Now the big question is where is the rest of the quilt so it can be assembled and I don't think the pattern is with the remaining blocks. That's still on the list of things to find.

This is a box of stuff that has been getting bigger and bigger after each time I completed the blog posts. It's time to deal with this. Of course, I choose the weekend when the posts need to be done to tidy up!


It's totally insane what I found in the box. Look at how much thread there was in there.


There were a couple of small projects that just need a bit of work to finish up and then they can go in the "to be quilted" pile or I'll finish them as part of my posts.

God - I found scraps from a project that I did a long time ago. Seriously? I couldn't throw this away? Obviously, I need help.

Then I thought of another project that I could use for this particular post. I had to dig deep in the storage room for that one, but I knew exactly where it was. It won't take long to make a block from this, but guess what? When I opened the box, I found a block already prepped and ready to go for what I needed. Yahoo!!  So that one is now completed as well.

Somewhere in my searching, guess what else I found? Another huge whack of threads. Seriously - this is insane. So all the threads are now stored where they should be.

When I opened one of those projects boxes, I also found something that had been missing for a while and matter of fact, the rest of it was sitting on the second desk here in the office trying to figure out how to get the missing part. It was an Eight part Mystery that we had done at the Brampton Guild. I was missing Part 5 and sure enough, there was Part 5 - in a totally unrelated box. Now the entire pattern is together and I'll put it back downstairs in my patterns - well attached to each other or in a plastic bag so nothing goes missing again. I'm sure someone gave me those missing instructions when I was teaching from that project box and it never got sorted properly when I got home.

Which means that we need to keep cleaning up and sorting when we come home from a class. I'm doing way more of that these days.

And I had to dig one more project box off the UFO shelf and it's spread out all over the place. So yes - the studio is a huge mess. But I'm slowly putting things back when I finish with what I wanted from the particular boxes.

When I was editing pictures this morning, I found this one as well. When I was putting the binding on finish number 7 for the year, this is how much thread I had left on the spool. Yikes - just made it!

Here's my quote of the day. 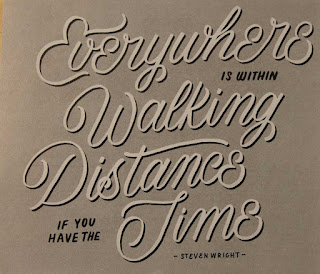 It was such a nice day that I decided to walk to the mall as I had to exchange something that I had received as a gift. There were two items that needed to be exchanged. I had already picked out the new items that I wanted. I had no idea what the prices were. But when I asked the lady what the difference was, she said I owed them $5. OH? What is the value of the two pieces I'm returning? $130 and what is the value of the two I'm getting? $110. Oh - so in fact, you owe ME $20. Well, we can't give you $20 back? Why not? I didn't argue the point because as I was browsing the catalog, I had seen something else that I liked so I got that and ended up owing them $30. Again, I don't blame the store, but the employee sure didn't know how to do math! It was Pandora in case you're wondering.

Then I had a beautiful walk back home. It was gorgeous and even though I'm under a deadline, I needed to get out. Walking around the neighborhood is something that I greatly missed when I was working. It's fun to just walk, the dogs stayed home. They are too unruly to go for that long of a walk!

The DTox program is still going great, but I'm a stress eater for sure! Yesterday when I was having a moment, I needed to eat. I never knew I was that bad! While I do miss the cookies and the chocolate, I really think I can live without them. What I really miss the most is the HOT tea. Green tea just isn't as hot as regular tea - I want something HOT! I guess I could try a decaffeinated tea. Because I tried green tea at black tea temperature and it's not pretty!

The big question will be - what will I introduce back into my diet next week? Caffeine? Dairy? Gluten? Alchohol? Refined Sugar? Any or all of them? I would reintroduce all of them if I knew I could use them in moderation. I seem to be an all or nothing girl! But let's say refined sugar for sure is GONE! Gluten should be OK - I do like pasta.

On that note, I'm on a roll, editing photos and uploading them and loads to write about. Still more work on the sewing machine and then more pictures.

It's my Mom's birthday today so I better remember to call her or I'll be in the dog house!