OK -- so I suck at curbside pickup! I had ordered a few things from Canadian Tire. I arrived in the parking lot to see large signs at the front door - DO NOT ENTER. OK - I get that, and then there was a phone number. So I called it. Nope - that's not the number for curbside. OH - there are reserved parking spots in the parking lot for curbside.

I pulled into one of the spots and followed the instructions. Cars parked beside me, and their orders were whisked out to them - I'm still waiting. I'm not in a good mood already since I was still having issues with my e-mail. FINALLY, I see a guy coming out of the store with a cart. Seriously?? I ordered some plastic lids and a BBQ lighter. Definitely does not require a cart.

Well, the e-mail issue is resolved - I think. I've no idea what happened. But I wasn't a happy camper. They ended up reinstalling Outlook from scratch after deleting the version that was installed on my computer. Of course, they saved the emails and my contact list so they could be reloaded.

After the guy got the download working for the MANY e-mails in the file, he signed off. Of course, seconds later, the file download hung, and I was no longer receiving new e-mails either. NOOOOOOOOOOOOO   Then it was time for me to do my pickups, so I just left it. While driving, I decided that I was going to abandon ALL e-mails and just start from scratch. GULP!! But I had my contact list - I dare not lose that.

When I eventually got home, the e-mail seemed to be working - sending and receiving; however, there were thousands of e-mails that didn't get migrated. And you know what? I'm over it. I didn't need them anyway.

What I was worried about were those e-mails that people had sent regarding sign-ups for classes. What if those are lost? So far - e-mails of that nature seem to be intact. I have no idea how The Cyber Gods selected what to save and what to toss.

I've "wasted" three days on this e-mail business, and I woke up this morning determined to not let it drag me down today. So I've created a new folder structure for the classes, I'll be setting up rules later today, and then everything should work automatically.

The other thing I'm trying to do is to clean up what's left of the e-mails. I probably do NOT need any of them. So it's best to just start the year off fresh with an empty inbox. Only 2,319 left to delete.

However, while I was on the phone waiting for the Microsoft team to do their work, I was sorting more crap in the office, so it wasn't a total waste of time. Here's a bit of what I found.

A box that the keyboard for my iPad came in. Why didn't I throw it away? Well, it's a nice box. I can't imagine how much these boxes cost to make (it has the magnetic flap), and it seems like such a shame to throw it away - but what does one do with it? Then I thought of Katheleen - this would be a good box to cover in paper or fabric, and it'll be good to use for storing something. It's downstairs in the craft area. See - I do get inspired by others!!!

I really think that companies need to think very long and hard about their packaging. I get that this box is attractive, but why would I store my keyboard in there? It stays attached to the iPad. So if I'm not going to store things in the box, I don't need a fancy box. Cell phones are the BIGGEST culprit of this.

Then I found a tin within a box of odds and ends. Yep - that's been sitting around for a while. How do I know? Oh - I remember where the tin came from - Liz found it at a second-hand store. Thanks, Liz!

I must have been planning on putting notes about good things in the box as I found this note. Now, let's see - how many years has it been since Ruti's has closed? At least two, if not three.
I found a small block from a Storm at Sea quilt that had been paper pieced. I've no idea what quilt the note is referring to!!
My porch pickups and drop-offs. So much less complicated than Canadian Tire! Thanks to Diane, who dropped off a bag of quilt tops for the community projects and picked up enough fabric to make four or five more quilts - she's a machine. I MUST get myself organized to get working on those quilt tops, but time is marching on, and I'm going to get crazy busy - well, I have a lot of planning and sample making to do for the rest of this month.
So while I waited on the Microsoft team, I grabbed this folder. Yes - I have a few of those. I was able to deal with everything in the folder. Most of it went into the recycling. OK - that's sad that I couldn't deal with it before, but that's OK. It's done, and I'm motivated to get more done.
I used to covet the Look Books from fabric companies. Why? I've no idea. Now I'm happy to look at the new fabrics on-line. This also got pitched. I have a few more that I need to pitch. OK -- I just pitched them. I now need to empty my recycling bin - it's rather full! And there's going to much more going into it.
I found this bag of stuff. The bag had been hastily packed the day that I left my day job. That was several years ago! And the bag was just tossed onto the desk. It contains all the inspirational stuff that had been hanging on the bulletin boards in my office.
I also found the missing tie backs. I have a rod, but no tie backs - well, now I can hang up another quilt.
I found a TON of magnets. I put these all on my magnetic boards in Studio B.
OH MY GOD - look what else I found. A small group of us want to do some mixed media experimenting, and we're going to start with Inktense pencils and blocks. I was certain that I had a set of 12 pencils, but I couldn't find them. I did find a set of 12 blocks, but no pencils. I was encouraged to buy the full set of 72, so I did. And then yesterday, when I opened a tin on my desk, guess what I found???  Yep- the box of 12 pencils. No worries - they can all be used. I KNEW I had a set, but where?
Also in that box with the orange tin were these scraps of fabric - leftover from making journal covers. Can you tell me why I wasn't able to deal with the scraps at that time? I know I'm going to find a whole lot more of this. The good news, it won't happen again. I'm over creating clutter.
I did move the handwork tub upstairs and pulled out those boxes of scraps to deal with in Studio U. It sure looks different this morning. I might have to give you a new tour when I'm done!
You know how everyone complains about Canada Post and not delivering packages on time? Or sending things somewhere and they being late? I have to say that I've never had issues. I recently send a package to Germany, and it arrived one day BEFORE it was scheduled. That was with Canada Post. Then on Tuesday AFTERNOON, I sent a package to Montreal. I sent it the cheapest way, which would take about 5 to 6 business days to arrive.
Imagine my surprise when I saw the contents of the package on Facebook before NOON yesterday. Less than 48 hours!!!  Thank goodness I didn't pay for the express post!
Needless to say, I think Joshua loves his Spiderman quilt!! He's so adorable!!! I asked permission before I posted these pictures! 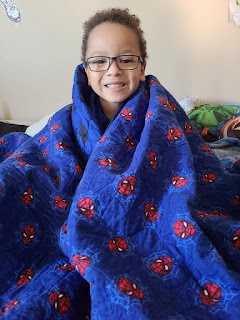 Thanks to Paul, who helped with the translation on the label. 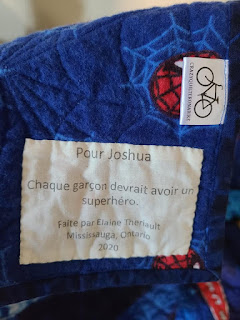 I see my dentist now has zippered plastic doors on all the rooms. He didn't have that the last time I was there. And however, they clean our teeth now is how I want them to do it forever. There's none of that high pitch squeal that drives me crazy!!!

Today is going to be a much better day. I'm back in control, and I'm over the frustration of the e-mail thing. I'll be at the computer for most of the day dealing with the rest of the class e-mails and a bit of writing to do. Let's get it done so I can relax this weekend and perhaps get some sewing done. I feel like I have so much and not getting anything done. Plus, I need to get back to quilting!