A trip down memory lane

Oh boy  - what a morning I've already had. I'm getting ready for my guild presentation on Group Quilts. Let's just say that I've participated in a LOT of group quilts. I haven't made the final count yet, but there are lots. I got some pictures that need editing and then get them uploaded into the presentation. Still more pictures to take today. But it was an eye-opener, to say the least!

I also found the lost quilt top - it was in a bag with another quilt top. Phew!!! That was one of my favorites. Well, I guess not so favorite if it's been languishing in a bag for years! I still need to find that article, but I haven't looked for it. That's a job for later today.

Oh - that reminds me that there is ONE more project to find. Then everything will be assembled in one spot. Oh yes - making Zoom presentations is way easier than attending a real guild meeting.

I have to get ready for my embroidery presentation tonight, but that shouldn't take too long.

Let's start with the photos that I didn't get a chance to post yesterday. Let's start with the software. I found two versions of the embroidery software. This is 4D, and it uses Windows XP or Vista. I don't think either of those operating systems is around any longer, so this is going in the garbage.

At least the CD looks likes it was taken out of the sleeve, so that means I must have at least installed it?? Thank god, because look at the price I paid. And I know that I never really learned it well.
I have kept the manuals for the moment. I'll browse through them and see if there is any inspiration or projects that I can replicate in the new software. Now that I know a bit more about this stuff, it'll be interesting to see what I could have learned!! Just checked the date on the CD - 2007. Oh boy!!!
Then it was onto Quicken. Can you tell me why I had 2008 and 2010? The 2010 version was never opened. That's very sad. It's amazing how much we live in an "I NEED" society, where we feel the need to have MORE of everything. I'm guilty - thankfully, not nearly as much as I used to be.
So this is gone as well.
And then there was the Simply Accounting 2005. That's gone as well. I'm not sure that I used this either.
This also went. It was open, but I doubt that it ever got installed. I'm just not going to think about the amount of money spent on all this stuff. Let's just clear the clutter.
A whole pile of paper - most of this was dated stuff, and most of it is gone - there's a couple of envelopes still to go through.
More cables and stuff for an old media drive. It's now in the electronic waste box. I'm still amazed at how this stuff accumulated, and I never "saw" it. Now I will say that all this computer stuff got shoved in the same spot - just like I've been telling you to do. But then, from time to time, one needs to go through those spots and get rid of what has accumulated. I'm almost at that point, where I need to start going through the "like" piles of stuff and really sort and pitch and purge. First, the office needs to be finished.
More CDs bit the dust, but I'm keeping the little envelopes as they can be used as pockets for journaling!!
As I'm going through all this, I'm sorting. Did you know that in our area, that bubble wrap is GARBAGE??? Yep -  you can't recycle this - I've no idea why not. And if you don't know where something should go - check out this site - Where Does it Go?
Here's another great beef of mine. Pretty packaging. This is a box that's been sitting in the office for years. It's a relatively large box, and it looks pretty, even though it has Teavana logos on the front. Inside are 12 small tins of tea. I'm guessing the tea was drank long ago, but the box remained.
I love the fact that those tins are square, but they do not need to be stored in that HUGE box. So the box will go, and I'll keep the containers. I'm sure they'll be suitable for buttons or other small trinkets. Did you ever realize that most of the excessive packing is for gift items? Well, and for security reasons. Those software boxes all had a CD in an envelope and then a small manual. HUGE boxes with practically nothing in them. What a waste of space for transport and shelf space.
Some of this stuff is still sitting on the floor and needs to be addressed, but I think one of the hardest things is to decide what to do with it.
OK -- I NEED your help on this next one. And don't judge me. I have this picture that I can't seem to throw away. It hasn't been hung up in years, and the glass on the frame is cracked. It's not an expensive frame, so it really needs to be trashed. But for whatever reason, I can't seem to do that. The picture is something that I saw painted before my eyes with spray paint. I believe I bought it in Vancouver with an artist on a street corner.

While I don't love the picture, I'm fascinated by how it was created. I've had it for YEARS. So what I might do is toss the frame and keep the picture. At least for the moment. I know - I should just throw the entire thing, but I can't. Why????   Oh god -- this is how hoarders feel about everything. At least this is only one thing.

And now for the sewing. We had Monday sewing yesterday and another great day!!! I love Monday sewing and being able to putter around the studio as if people were there, but in fact, they are not. I actually prefer the Zoom call to packing my machine and project up and going to a location where I have to set up tables, etc. I know - I've said it before, but I will be hard-pressed to go back to the old way for the sewing group. Gasp!!!!

I trimmed one of the customer quilts and attached the binding for them. Yeah!!! The quilt is already gone—two more to trim today.

Then after the sewing session, I got M's quilt done. It turned out absolutely gorgeous. I put black batting in it, and it has Cuddle fabric on the back.


In case you're wondering why I never seem to make huge advancements in anything, this is why. As a matter of fact, I'm trying to think if I've finished anything this year. Oh yes - maybe two small things near the beginning of the year! I'm advancing many projects but not completing any of them. Oh well - do I care? Nope!
After I put the borders on that panel for M, I had these pieces leftover. They went onto the current projects table. They have been niggling in the back of my mind. Yesterday, after the string quilt came off the design wall, I put these up. Oh YES -- I have enough to make a table topper or a small wall hanging. 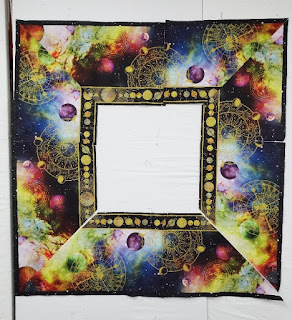 The center is about 12 inches. What could go in there? I found a neat machine embroidery pattern that might just fit nicely in there. And this is how I get distracted!! Remember those scrap blocks I was working on? Or how about the homework for upcoming classes? Well, it's all cut - how long could it take to sew them together? You can all stop laughing now!!!
I made significant progress on the double wedding ring arcs. I'm not sure how many there are that were never started, but I got three (of eight) pieces attached to each of the remaining arcs. That's great news. The top grouping just needs to be pressed; there are three pieces.

I don't have enough of that floral (in the middle) to finish off eleven arcs? Yikes - I wonder if I need them? Well, I'll just have to find a substitute if I do. I'm pretty sure I counted correctly. Anyway, I'm forging ahead and leaving out those eleven until I'm sure that I need them. Once the arcs are done, the next step is cutting some other pieces. So I'll have to take inventory as there are a LOT of project boxes for this quilt, and I'm not sure what was done and what still remains to be done.

I have a tub of extra fabric, which I went through and found some floral fabric scraps. That was enough to do five more arcs but still leaves six remaining. Perhaps I'll find a scrap or two. And if only I had known, I could have been a wee bit more careful with the cutting. I cut ¼" away as excess when I trimmed, and if I were to add up all those ¼," I would have been OK. Sigh...........   I thought there was way too much fabric in the box. And well, this fabric was the one that was short. There's extra of the other fabrics - OF COURSE!!!!

What can you clean today? I think today should be a day of reflection. If you didn't have time to clean out an area that I mentioned, today is that day. One of the hardest things is once a place gets clean, how to keep it clean. So look back on something we cleaned recently - your bedside table, your cutlery drawer, or under your backroom sink. Is the area messy again? If so, then we need today to reflect why? And what can we do about that. Stop buying? You haven't found proper homes for things? You have too much stuff? It's hard - this is even harder than cleaning, but it needs to be done!!! Good luck!!

Well, that's it for today. I've got to empty the recycling bin in my office as it's full and I've got to put a few things in the big recycling bin so I can clear up this floor in the office. I'm getting ready for the next round of stuff to deal with. I hope you're all proud of me for finally tackling this mess after how many years of whining about it? It's slow - I knew that was going to be the case, but at least I'm working faster than the person (like me) who is ignoring the mess!