So yesterday, I said I might have to move to a smaller house. Elle pointed out that I might like to walk around my existing home (with less stuff) and enjoy it. And you know what? She's right! It's such a joy to walk around with ease in the same space where I had to hop over things to get from A to B. I know - not safe, and how ridiculous. Or something would fall off a shelf if I passed too near.

I have to confess that I even opened the door to that storage room several times yesterday to admire my efforts and appreciate the openness. AH -- what a relief. What a sense of FREEDOM.

I'm learning here - it's not been an easy process, but when I think of the amount of time spent accumulating things and then how much time I've spent dealing with those things and managing, sorting, etc. - what a HUGE waste of time. But that's all in the past. I'm moving on, and I'm quite happy.

Someone who might not be so happy this morning is Diane! Oh yes -- I arranged to drop off all that flannel at her house so she could sort through it all. I did offer to take some of it back once she sorted through it. She must not have appreciated the quantity, or she didn't alert her husband because as I handed him the bags discreetly through the door, he kept asking, "Is that it?"

In return, I got one bag filled with quilt backings and quilt tops, and I don't think there were any leftovers from these kits.

I did remove a couple of huge flannel pieces, and they are now sitting in the backing area for the community projects. No sense adding to the mess I already dumped on her. I love you, Diane!!!!

But look what I found. Yep -- I was hooked on novelty prints. Two different colorways of Canadian Idol fabric. How cool is that? I think I was going to make PJs from it. But that never happened, so these pieces will become the backing for a quilt.

Here's the bag that I got back from Diane. It's still in the middle of the floor as I didn't have time to put it away. OK - so I did, but I'll do it later today. And now that the storage room is so neat and tidy, it'll take mere seconds for this to go in the right spots. That means MORE time to sew.
I think I shared this photo yesterday of my paper pieced arcs for the double wedding quilt.
I'm happy to report that ALL the rings got finished yesterday. Well, that's not exactly true - I have set aside about 11 that I was missing some fabrics for. I'll search for a substitute if I actually need those extras - remember, I'm making two quilts here. One for the person who gave this to me and the rest will make another quilt to donate.
Then during a Zoom chat with friends last night, I started to trim.
I think I got half of them trimmed or very close to it. I was impressed!!! And here's the thing - the three of us don't live super close together, and we don't usually get together regularly, but Zoom now allows us to stay in touch way MORE than when we were able to get together in person. So is Zoom a good thing? You bet!!!  Think how it can change the relationship between people you don't see often - it's a game-changer for sure!!! I think Zoom has given us more time! And I want to maintain that consciousness of time once we go back to normal. I also think there are HUGE advantages to having guild meetings on Zoom, and I hope that stays! The same thing with classes. YES - I will teach in person again, but I will continue to teach on Zoom.
And let's not forget the virtual retreats. Those will continue!! I love them. The next one is scheduled for February 27 (evening) and February 28 (all day), so watch for the Zoom links closer to the dates.
If you remember way back about this double wedding ring quilt, I taught this as a class, and the person who was making the version above passed. Well, as part of this whole exercise, I've dug my version out of the UFO pile. Of course, it's not done!!! I'm only making the bed runner, so it's not a large project, but I might as well work on both of them at once. Oh yes -- let's get our priorities straight here!!!
I noticed that my arcs are done - but they are NOT trimmed. I'll just add that to the next trimming session. I also looked at my calendar for this coming week. Oh boy -- there's NOT a lot of free time. Loads of classes and presentations, so with the prep work, I don't think I'm going to get much done in the way of sewing for me.
By the way -- Happy Valentines' Day!!!!  My Mom always sends me a handmade card!! Thanks, Mom!!! I've kept them over the years and have a huge stack that I might use in my scrapbooking stuff, which I need to carve out a wee bit of time to work on.
What did I find in the paperwork pile? I didn't spend a lot of time there yesterday, but I found these two little books. If you've never been in an accident, here's some critical advice. Make sure you have TWO numbers handy - the number of a towing company that you trust or that is recommended by your insurance company or if you have CAA or AAA - have that number handy. The second would be the number of the insurance company. Put them in your phone or on a sticky in the glove box of your car. 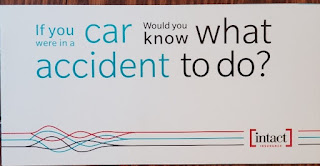 I learned that the hard way, and we had a tough time dealing with the tow truck company when that idiot whacked my car on the highway.
Here's the other book that I found. It was a great little book on medical insurance inside and outside your province, inside and outside our country, and travel insurance. I must confess in all my travels (not that I'm a world traveler by any means), but I've NEVER bought out of country medical insurance or travel insurance. I've never been caught either - I don't mean caught like I did something illegal, but I've never had an issue. As I get older, I may need to rethink that. 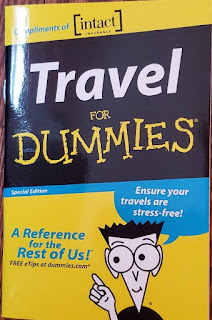 Anyway, the book was written in 2011, and I figured the information was dated, so it went in the recycling.
I LOVE my Husqvarna Viking Designer EPIC 2. When I turned it on yesterday, I noticed that TWO new projects had come in through the blog. One was a tutorial on using tapered stitches - funny, I was just playing with those last week, and the second was an adorable luggage tag or just a tag for Valentines' Day. It's so easy to get the file - I just touch the file on the screen, and it gets loaded into my embroidery edit screen. How easy is that???
I did get a customer quilt done yesterday!! I hope to get one more done today, and then not sure if I'll time this coming week to work on any others.

Then silly me decided to continue working on those scrap blocks. I don't have time to work on them, but I did!
I now have EIGHT sets left to sew. That's a total of 16 blocks, which is still quite a bit as they are fiddly to sew. But I'm on a roll, and I might try to sneak in one set a day?? NO -- I have a lot of stuff to prep for upcoming classes.

Speaking of which, I have TWO classes today, and I'm in pretty good shape for the prep. Just a couple of slide presentations to throw together.
Oh - it's still cold outside - minus twenty with the windchill this morning. Despite the cold, I walked 12 KM yesterday. If you dress appropriately, and by that I mean, a hat (NOT a toque - toques do NOT keep the wind out), a scarf TIGHTLY wrapped around your neck, a warm jacket, flannel-lined pants, and running shoes with ankle socks?? What??? I know - too lazy to put on boots, but my feet are warm! Oh, and let's not forget the two-layer fleece mitts with thin gloves inside. As a matter of fact, often, when I'm on the way home with Lexi (the second walk), I'm sweating and have to unzip the jacket a wee bit.
It's not just about the clothing; it's about attitude. If you think it's freezing, then you are going to be cold. If you imagine the snack that you can eat guilt-free at the end of the walk, then it's easy to get that coat on and get outside! It works every time!!!
What would you like to sort today? OH - it's Valentine's Day, and I bought a nice chocolate bar to eat later today in honor of Valentine's Day! OK - so I eat chocolate every day. I eat too much, but I can't help it. I do need to get back to my healthier snacks. Since it's Valentine's Day and it's Sunday - NO sorting or cleaning today!!!!
By the way -- it's the birthday of our former mayor today. Why is that a big deal?? She's 100!!!!! And I think is one of the longest-running mayors in Canada. She was mayor from 1978 - 2014 -- she retired from her mayoral duties at 93. That's incredible, but she was the best mayor this town ever saw. Happy Birthday, Hazel!!!!!
On that note, I'm out of here. Loads of work today, and let's get started.
Have a super day!!!!