If you're looking for sewing stuff today, there isn't going to be any! Although it's hard to believe, I do other things than sewing. And even though I have tons of work to do, I decided to take the day off! I have to laugh because the other day, someone casually mentioned that there are people who might like to do what I do! Hmm - I hadn't thought about that before. But it's a crazy life - there's rarely a day off, the pay sucks, but the projects I get to work on and the toys I get to play -- well, that makes it all worthwhile!

So the past two days were Earthcache Geocaching days. You got a virtual badge for completing one on either of the days. Since I had already received my badge the day before, I didn't need to get another, but I thought -- what the heck -- it's a good day to get out. And I really just needed a mindless day.

Since it was Earthcache weekend, I decided that it would be best to reduce my carbon footprint and walk to my destination. I laced up my shoes, grabbed a small backpack, and I was off. I snapped a few pictures of my walk as I went.

Yes -- even though I live in a large city and did NOT leave the city, I walked on all kinds of interesting trails and roads.

I started off in the forest at the end of my street. This is one of the smaller unofficial trails.

Which leads to this larger official trail. I usually walk some part of the forest every day with one or both girls.
Soon, I left the forest behind and was on a major street, and the sidewalk and the multi-purpose trail were covered with fall leaves. Very pretty!
I had to cross a major street, and there's the crossing for pedestrians and cyclists. I see that there are many new bike paths in the city. Next year, I'm setting a cycling goal, not a walking goal, so I can explore further afield.
Then I was able to turn down a smaller street as I closed in on my destination.
I had to read the interpretive signs along the way to learn about these amazing Storm Water Management systems in the city. I had no idea about them until I started doing the Earthcaches. They are pretty significant to our city and helps reduce flooding. Very interesting.
Well, I had ridden my bike around this area but didn't realize that there was a path that went completely around the Marsh. As I searched for the second interpretive sign, I realized that it was completely on the other side of the Marsh.
I found this at the end of the Marsh. It's a wall that helps slow the flow of water. Pretty cool. And it was hilarious -- in this large city, it's extremely rare that you run into someone you know. As I was walking along this far edge, I noticed two cyclists coming towards me. I glanced at the T-shirt of the front person, and then - OH MY GOD -- there's Ruthi, who used to own the local quilt shop! She's an avid cyclist, and she and her husband were out for their daily bike ride! We chatted for a few minutes, and then we were both on our way. That's hilarious!!!!
This was the path around the edge of the Marsh. Very well maintained and not super busy yesterday.
Here's a look at the pond off the side of the road. It's fairly large.
And this pathway backs right onto people's backyards on the right-hand side.  Hmm --- this looks a bit busier than the path behind our house and way too close. Murphy and Lexi wouldn't be able to control themselves.
One of the questions on completing the geocache was, did I see any wildlife? Well, I heard the frogs. I can't imagine how noisy they are at night! But look what I spotted. A blue heron!!! This was the best I could get for a photo -- OH shoot -- where is that 100X zoom camera on the phone? But the quality wouldn't have been there either.
But he was quite happy to walk along the opposite shore.
While I was in the area, I decided to check out another geocache. This was a multi-cache, where you have to answer questions - the answers were on a plaque in a park and then get the new coordinates. I got the new coordinates and wondered how the heck I was supposed to get to them - in the middle of the pond. Well, not quite the middle, but not readily accessible.
I continued to walk around the pond holding my phone with the geocaching app open, and OH MY GOSH - I spotted a small trail leading off the central trail, and it led to the center. It was not an official trail, but people had definitely been there before me, so I started walking. It was on that small trail that I spotted the heron.
And there's a fast-flowing creek leading into the pond. That is one of the water sources that feed that pond.
Careful as you walk over the rocks.
I arrived at the spot where the geocache was supposed to be, and some people were there. They said something, laughed, and then left. It looks like a beaver has been busy at work. Although there is no sign of a beaver hut.
Little devils are having a great time chopping down this tree.
As I searched the tree for the cache, I spotted some snails. They were fairly large.

And some kind of spider.
Oh - here's a better picture of the creek. See, that path, while not official, is pretty well-traveled. 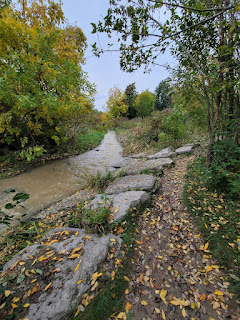 Alas, I did NOT find the cache at the tree. I don't know if the people before me had taken it? It happens, or it fell out into the grass? I logged that I didn't find it, and I may go back if I see new activity on this one.

On the way to the Marsh, I passed a regular urban geocache stuck behind a speed sign. Right on the corner of a bustling intersection. Good grief -- how does one surreptitiously grab that? Well, I reached up and grabbed it, signed the tiny logbook, and then put it back. So if ever you see someone doing something bizarre in a public place, they could be geocaching!!!

The interesting thing about the storm management ponds is that they have to be dredged from time to time. According to the information at the Marsh, it's about every 15 - 25 years. I can't imagine the effort it would take to dredge that Marsh.

There's a storm management pond near my house, and they've been working on it for months, and it's nowhere near the size of this other one. And while the quantity of the trees turning color is not great, the colors are spectacular.

Miss Lexi and I had stopped to take some pictures of the one near my house in the morning.

All in all, it was a super day. We had our Thanksgiving dinner last night - and well, I just love the pumping pie and fresh whipped cream. And DH did make a pretty cool salad (that I ate more than my fair share of!). I was tasked with picking up the missing ingredients on my way home from the urban hike. I grabbed the few things, shoved them in my mini backpack, and I was home.

It was a great day with close to 18 KM walked! I can't wait to do that again as other Earthcaches are within walking distance of my house. I'm going to be so smart!!! My hike took about three hours, so it's very doable on a weekend or a weekday! The travel time? -- there was no travel time!

What a super way to get to know your own city. And I've been noticing on some of these interpretive signs that the city has resources to help make your own yard more eco-friendly, and I'm going to explore that. We've already gotten rid of the grass, which is a HUGE water waster. We do have some shrubs and such, but some of them are getting tired, and I'd like a bit more color. So I'm going to investigate that for next year.

I did get some sewing done and some research; that's all part of the job. And I'm learning stuff! Who knew!!! Don't worry -- once I've assimilated the information, I'll share it with you.

And yes -- the Monday group will be sewing today! If they weren't, I'd probably be out for another urban hike, but I have work that needs to be done, so I'd better stay indoors!