So Murphy and I were out for a walk. We had just started down the multi-purpose path near us, and we spotted a skunk by a tree. WHOA! Of course, Murphy went nuts, but then I noticed the skunk was NOT well. I stopped to take a picture which didn't turn out, and a couple of joggers passed me and mentioned that the skunk didn't look well. OK -- so it wasn't just me. How does a skunk not look well? When they are having a seizure -- that's how!

I stopped and called Animal Services. Good grief -- my second time in a couple of months. Yep -- they would send someone to pick it up.

Murphy and I walked up the path for a couple of blocks and then turned around and walked back down. I was NOT walking on the sidewalks yesterday -- they were treacherous. By the time we got back to that corner, the Animal Services van was there. As I approached, the officer approached the skunk with a cage and quickly walked away with the cage. I'm guessing the animal was so sick that it didn't budge, and she just used her foot to nudge it in the cage.

OK -- so the area was pretty smelly with the skunk smell, and I wondered how she would deal with that in the van. AHA -- there's a little platform on the back of the van, and she strapped the cage onto the platform. So the smelly skunk got to ride outside. I'm sure he's long gone by now, but the way he was acting made me think of distemper or rabies, and we don't want that in our yard.

We had a great Monday sewing. We will be very hard-pressed to go back to in-person sewing when we would be allowed. I really like Zoom as it allows people to participate from anywhere. Two people are vacationing in Florida right now, and even when they are back in Canada, they are too far away to come to the in-person sewing. One person lives in Massachusetts, and one other person was in the in-person group and moved to Eastern Ontario. It's the packing up of machines, the driving, and the set-up -- well, I think Zoom is here to stay for the sewing group!
It's a shame that more people from our group didn't embrace the technology. It's been a saving grace for us during the lock-downs.
And now onto some work that I did! YES -- actual sewing. I was a bit behind in the homework for Wanderer's Wife. I had only made one of each of these two blocks, but I needed two, so I made the second of each.
And I remade these blocks.
I had originally made them all yellow.
But I realized that I should have made blue and yellow blocks, not just yellow. So those are remade.
And here are the other blocks that we've made so far.

Two of these blocks are pictured above, but the third block is different. 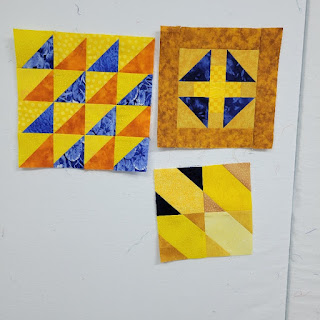 My background strips are cut. I'm not sure if I have cut enough, so I need to work on the sub-cutting, labeling, and assembly of those strips. That might be a job for the virtual retreat that's this coming weekend. But other than working on the strips -- I'm up to date! It's a challenge to keep up with all these sew-alongs. I'll be evaluating the number that I start in the fall! I love teaching them, so I'll always be doing some!
But after we finish the four Jen Kingwell quilts that I'm working on, that will be it for Jen for a while!
And this weekend, there are FIVE classes to prep, so it's going to be a busy week. Plus, that French serger class will finally start this week - I hope. It's been delayed two weeks in a row now for various reasons.
I also finished my scrappy green quilt. Here's the top.
The backing and the binding are done, and it's now in the "to be quilted" pile.
This quilt was on my 2020 UFO list, so that leaves eight more projects on that list. Yes -- slow and steady, these giant UFO projects are getting done.
And I added two more hourglass blocks to my bag. So now I only need five more before I can start to sew that project together.
I hope to get five more from the stack of triangles by the sewing machine. We'll see how it goes. It's not like I'm in a rush to start sewing that quilt together.
Hmm -- as I'm writing this, I remember that there were two things I thought of last night as I lay in bed. I did NOT write them down, and now -- do you think I can remember what they were? Nope! Hopefully, it comes to me today!
I don't know what Murphy did, but it looks like she put herself in the dog house. Sleeping in her bed facing the wall? She doesn't normally do that. Poor thing. Maybe she was traumatized by the skunk incident!

Don't forget that we have the Virtual Retreat this weekend! I almost forgot! It starts on Saturday, February 26 at 6 PM and technically goes until 9 PM. And then Sunday, February 27, it starts at 11:30 AM and goes until whenever. I'll post the links starting tomorrow. It will be super fun, and I'm getting stuff lined up and ready to sew.
On that note, I'm off to see the condition of the sidewalks this morning. Yesterday was a glorious day, and I walked a LOT after Monday sewing. But it's hovering at zero this morning, and my guess is that those sidewalks are going to be treacherous with bits of ice patches all over. We might be walking only on the multi-purpose path again. That's OK -- we can go for miles on it, and Murphy behaves because there aren't many squirrels.
Have a super day!!!
Ciao!!!!